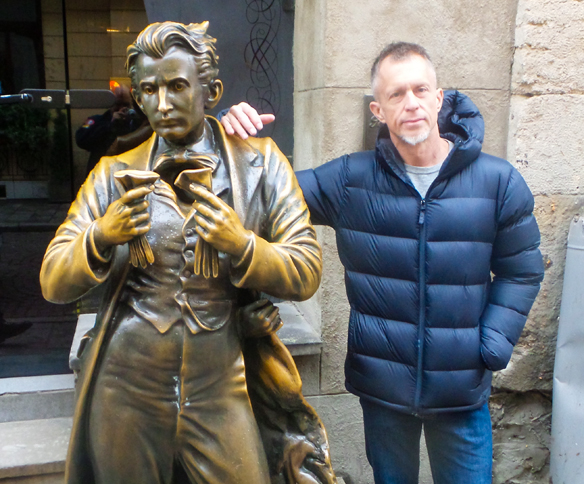 Television host Robert Rose stands next to the statue of Leopold von Sacher-Masoch in the city of Lviv.

Talk about a chain hotel…

The newest addition to the hotel scene in the Ukrainian city of Lviv is the Masoch Hotel & Cafe, named after Leopold von Sacher-Masoch, a longtime 19th century resident of the city whose personal idiosyncrasies and seemingly bizarre preferences gave the world the term masochism.

The hotel – slated to open in Lviv’s carefully preserved old quarter this weekend – recalls some of his lifestyle’s quirks, with a medieval-style stocks found in its lobby and guest rooms in the 14-room property having manacles dangling by chains above oversized beds.

Bathtubs are found near the beds, rather than being walled off, with those bathing being in plain view of anyone else who might be in the room.

“You can do whatever your fantasy is. Guests are not forced to do anything. We just give them the option,” says spokesman Taras Maselko.

“Nobody’s pushing you to enter this.”

The hotel – much of which is highlighted by red décor – is owned by Lviv firm !Fest, which is opening another local hotel and has a collection of themed restaurants and bars that includes the Masoch Cafe, found immediately next to the Masoch Hotel and which provides visitors with further insights into the man who inspired it. A statue of Masoch outside the bar has an opening in one pocket that enables giggling tourists to stick a hand inside his pants. A keyhole design on the cafe entrance recalls how a young, voyeuristic Masoch would peer through a keyhole to watch his aunt undress.

The somewhat dimly lit bar states that those entering will be “(jokingly and gently) whipped no matter if you’re a prime minister or a driver,” with the self-punishment recalling treatments Masoch – whose father served as Lviv’s police chief – would presumably enjoy.

!Fest plans to add more food options to the offerings in the cafe, which will serve as a bar and restaurant for hotel guests.
Maselko says !Fest hasn’t had trouble recruiting people wanting to work in the bar or hotel, and those employees have their duties carefully explained.

“It’s their job to show the concept, but not cross the line,” he adds.

Maselko says !Fest expects that some guests might actually be masochists, while others will simply be curious about an unusual hotel concept.

Local tourist guide Diana Borysenko says Lviv residents aren’t shocked by a statue dedicated to a man whose sources of pleasure would seem shocking to most.