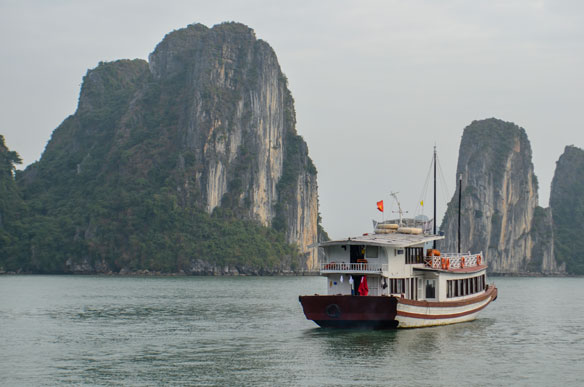 Pictured above: A sightseeing cruise in Ha Long Bay, before the start of ATF

While Canada increasingly feels the economic presence of China in everything from tourism to real estate to high technology, the Chinese juggernaut is much more apparent in Southeast Asia.

With its immediate geographic proximity, China exerts its presence in all matters of commerce in Southeast Asia – a fact made clear at the recent ASEAN Tourism Forum (ATF) in Vietnam.

That country already had close ties to China, reinforced by both stormy and supportive relationships spanning centuries. Now, it and others like Cambodia, Laos, Malaysia and Myanmar are participants in many economic partnerships with China – including those based on tourism.

These tie-ups were all fodder for presentations and conversations at the ATF, which assembles the tourism interests of 10 countries in the region under one roof. Besides those named above, the ASEAN (Association of Southeast Asian Nations) collective also includes Thailand, Singapore, Indonesia, Philippines, and Brunei.

This year, reps from all of those nations spent a total of five days in Ha Long City, the gateway to scenic Ha Long Bay in Vietnam. Two days were filled with ministerial meetings and local tours, while the other three were occupied by the Travex travel trade mart. It all took place at the futuristic Quang Ninh Exhibition of Planning and Expo Center (QNEPEC).

There, tourism product sellers from the 10 ASEAN countries met with product buyers from around the world. A total of 1,500 delegates, including tourism ministers and staff, heard about and discussed the impact of the giant to the north on regional tourism commerce. And a lot of that information was presented at daily media briefings to the large contingent of international press that gathered at the Quang Ninh Center.

ASEAN Regional Connections
For example, they heard that the transformative ASEAN highway network, linking Southeast Asia to China through the border nations, continues its long (slow) progress towards completion. Once finished, the highway will provide new, speedy gateway connections for both commercial traffic and tourism between China and Southeast Asia. 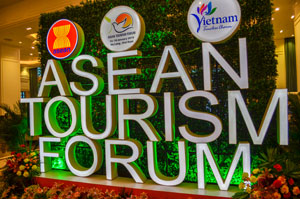 As well, China is providing much of the financing to build a US$6 billion railway project into Laos, linking its capital Vientiane to China’s southern Yunnan province. The railway is slated for completion by 2020, and promises to transform landlocked Laos into a transport hub for the region.

Transportation developments like these are contributing to large jumps in the number of tourists forecast to arrive in Southeast Asia from China. Foreign inbound arrivals into Asia Pacific in 2023 will continue to be dominated by arrivals from Greater China, says the Pacific Asia Travel Association (PATA).

The total of all international visitor arrivals (IVAs) to the Asia Pacific region are predicted to reach a record high of almost 900 million by 2023, says PATA. And the flow from China, Chinese Taipei, Hong Kong SAR, and Macao will together account for almost 40% of the expected volume by then, says PATA’s Asia Pacific Visitor Forecasts.

Canadian buyer impressions
A more connected Asia is consistent with the ATF 2019 theme “Power of One,” said Ricky Poon, COO of Silkway Travel & Cruise in Richmond, BC, who was there as a product buyer for his company.

“I imagine a better connected Southeast Asia and more open borders for travel. A lot of work has already been done on highways and roads, and going from country to country is not as difficult as before,” said Poon.

“The next step will be to connect the countries by express trains. Also, a single travel visa for Southeast Asia would be beneficial. If ASEAN introduces a single visa like Europe, then it will be able to see the ‘power of one.’”

The increasing number of tourists from China is the cause of some room booking issues for Poon, but mostly just in the major cities. It is less of a problem in the secondary cities, where his clients are going to discover local life, culture and historical sites.

Also attending ATF from Canada was Daniela Caputo of Montreal Event Planner. This first-time attendee said that her reason for going was to “explore the options Asia has to offer for upcoming outbound trips for my clientele,” and that ATF was definitely a worthwhile investment in time for her.

The schedule of brief buyer-seller meetings gave her the opportunity to learn a lot, and made her realize that she needed to come back for more. “The intent is to bring all of my groups to Asia… yes, absolutely, I would go back for another ATF.”

Caputo will have that opportunity in a year’s time, when the 2020 ASEAN Tourism Forum will be held in Brunei Darussalam, better known as simply Brunei. This small country is located on the north coast of Borneo and is best-known for preserving its rain forest from being developed, leaving it for visiting tourists. Its coral reefs and dive sites have also not been exploited by over-fishing, and dive tourism will be a focus at the ATF 2020.

ASEAN Highlights 2019
Following are a few more tourism highlights from the nations of ASEAN: 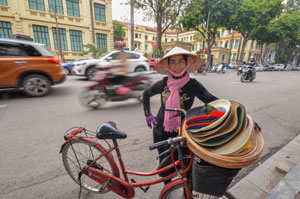 A vendor on bicycle stops to pose in busy Hanoi

In Thailand, a new anti-plastics policy is eliminating the use of straws, styrofoam and other plastics in the country’s parks. Also on the environmental front, the province of Nan in northern Thailand was named as the #1 ASEAN Clean Tourist City. As well, Krabi was named as the “Global Low-Carbon Ecological Scenic Spot” at the 2018 Global Forum on Human Settlements and Sustainable Cities.

Vietnam is in the midst of a tourism boom. In 2017, tourism arrivals reached 15.5 million, up from just 8 million in 2011. Visitor numbers are projected to hit 18 million in the next two years. About 80% of the tourism growth can be traced to China and Korea. Meanwhile, hotels, resorts and condo hotels are rapidly filling the skyline in Ha Long City, and the streets are dotted with construction sites. The number of rooms there has grown by 152% over 10 years. 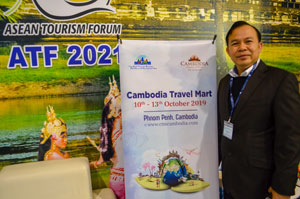 Om Pharin, CEO of Charming Cambodia Tours, is overseeing the Cambodia Travel Mart next October in Phnom Penh. Cambodia will also host the ATF in 2021

At ATF, Malaysian tourism officials said Malaysia would “make lots of noise” in terms of tourism promotions in 2019. Included in the messaging will be news that the 20th Century Fox World theme park will open at Resorts World Genting in 2019. More visitors to Malaysia are expected in the wake of the PATA Travel Mart that was held in Langkawi in September of 2018.

In Cambodia, Sihanouk International Airport opened its refurbished passenger terminal, as the first phase of a five-year development program. And last August, construction started on a new seaport in Kampot province, slated for completion in 2019. It will serve tourists who want to connect with destinations in Vietnam and Thailand. 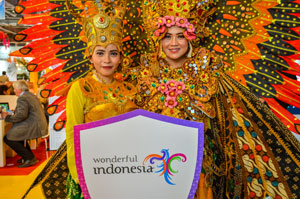 In Indonesia, Komodo National Park, famous as the home of the daunting komodo dragon, is currently being assessed due to ecological concerns and may be closed. The provincial governor is proposing to close Komodo National Park to visitors for a year. This may be needed to stop the extinction of the Komodo dragons, which have decreased in number, apparently due to a lack of prey.

In the Philippines, history will receive greater attention as a series of heritage-focused activities are scheduled – a departure from the usual sun, sand and sea highlights. In the spotlight is a two-year campaign called “Philippines500”  which will be a celebration of the quincentennial circumnavigation of the world. It will run until 2021, which will coincide with the 500th anniversary of Ferdinand Magellan’s discovery of the Philippines.