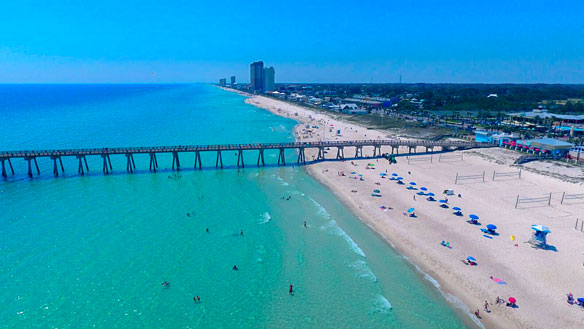 Hurricane Michael huffed and puffed, but it didn’t come anywhere close to dealing a knockout blow to the tourist trade in the coastal Florida city of Panama City Beach.

The Oct. 10 hurricane only lead to “minimal structural damage” in the northwestern Florida destination, which was “90% up and running” as of Dec. 4, says Jayna Leach, vice-president of marketing for Visit Panama City Beach, the local tourism promotion body.

“In certain areas, you would never know that something had happened,” she reports.

Indeed, Leach is expecting that this winter’s tourist trade will pretty much be on par with past ones for Panama City Beach.

Leach concedes that Panama City Beach hasn’t made the same inroads internationally as some other Florida destinations, but says it draws Canadians, who often spend one or two months there during winter in what she labels a “unique, laidback and fun” destination.

Much of its tourist trade revolves around what Leach describes as white-sand beaches and emerald water.

The fronting Gulf of Mexico offers opportunities for the likes of kayaking, snorkelling, diving and other water sports, or, as Leach says, “anything above or under the water.”

The area is also home to the largest number of bottlenose dolphins in American waters. “When you get out on the water, you’re always seeing something, whether it’s dolphins or sea turtles or even a manatee,” Leach says.

Leach acknowledges that Panama City Beach can see cooler winter weather than southern Florida. “We may not be the warmest, but we’re the most fun.”

Leach also says that her destination hosts “amazing” events throughout the year. Those include New Year’s celebrations that feature the family-oriented Beach Ball Drop – which sees 10,000 beach balls dropped at 8 p.m.– and is followed at midnight by the dropping of a “beautiful LED-lit beach ball from the sky.”

Another highlight is the March 23 and 24 UnwineD celebration, which has wineries, craft breweries and restaurants invite people to sample some of their wares in a park. March 24 will see a concert as well.

Meanwhile, the area is seeing its hotel infrastructure grow, with 2017 seeing the opening of a Holiday Inn Express and a Hampton Inn. Other upcoming projects include a Margaritaville resort that will see a phased opening starting in 2021.

More information is available at VisitPanamaCityBeach.com.