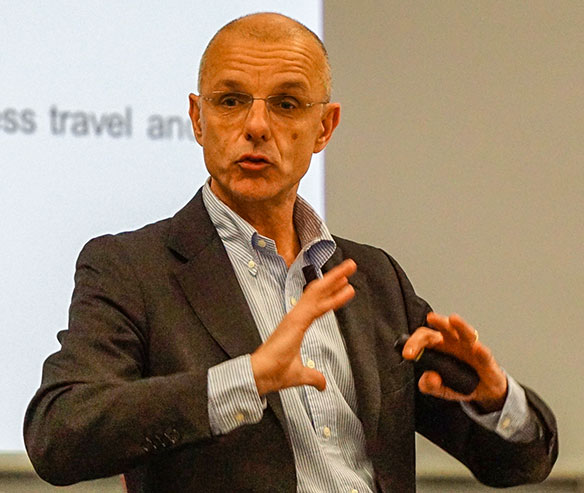 IATA has charted the upcoming journey to New Distribution Capability (NDC) adoption by a majority of member airlines by highlighting the experience thus far of a core group of carriers – including Air Canada – which have already embraced the program.

Yanik Hoyles, the association’s NDC director told a recent Geneva press briefing, “In order to pave the way to critical mass, IATA has set up an NDC Leaderboard of 21 airlines which, collectively, carry 30% of all IATA passengers and which aspire to having at least 20% of their indirect transactions via travel agents coming from their NDC application by the end of 2020.”

In effect, the 21 Leaderboard carriers will be providing leadership to other airline followers which will have a roadmap to NDC, explained Hoyles.

Excellent news
He offered, “This is excellent news as the airlines are being open about their commitment to NDC, and, as a result, other value chain players such as technology providers, GDSs, travel agents and buyers see the opportunity to embark on this journey and to also invest in the future.”

The Geneva-based exec stressed, “This approach is not just about the Leaderboard airlines.

To achieve the 20% critical mass, they will have had to break down the major barriers to adoption; sort out the technology and agree to new commercial terms with their partners.”

And he revealed, “From what we have heard from several of the airlines, we are very confident this target will be reached, while some will exceed it. As a consequence, when the followers choose to embark on a similar journey, the access to the NDC ecosystem will be much easier, faster and more cost-effective.”

Explaining the need for NDC, Hoyles stated, “The value chain is constrained today and customers, travel agents and airlines are the victims of an outdated standard and technology capability.”

He added, “The customer experience is not consistent depending on where people search for travel and not rich when shopping through travel agents, who can’t easily access many airline products that are available on carriers’ own websites.”

Going modern
Put simply, “NDC is the modernization and digitalization of 40-year-old data exchange standards for ticket distribution that were developed before the Internet was invented,” he said.

The new approach consists of using XML internet language to support the delivery of rich content such as the ability to buy ancillary products and services in travel agency and other third-party systems.

Hoyles declared, “The primary driver for NDC is the revenue opportunity. NDC will unlock value through the travel agent channel by providing it with features and content it cannot access today.”

He said a key revenue driver will highlight product attributes or differentiation, thereby providing the ability to show competitive features that may be unique to the offer and drive the purchase decision.

Other drivers include fare families displaying multiple price points with increased value, which may drive up-sells and ancillaries displaying additional products such as lounge access, which could drive the purchase decision.

And Hoyles concluded, “NDC provides all these features to be pushed out to the travel agent channel.”