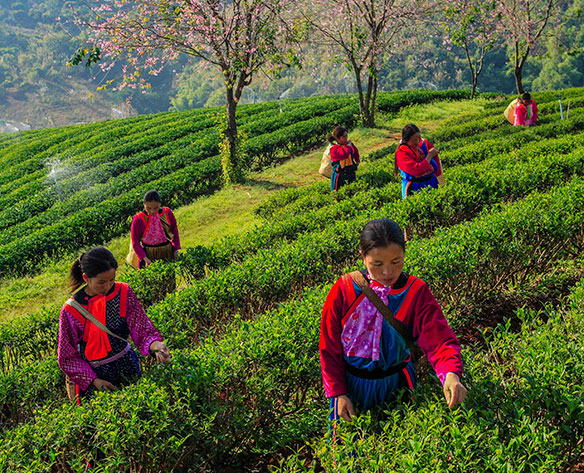 Story and most photos by TED DAVIS 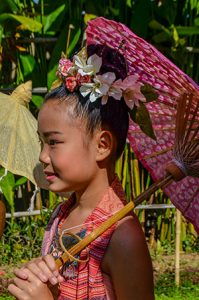 Girl in traditional dress at the Jinnaluck sustainable arts centre.

For 18 days in early July, the attention of the world was drawn to a tiny, mountainous corner of northern Thailand where 12 boys from a junior soccer club and their coach were trapped deep in a cave complex by rising flood waters.
As the extent of their peril became evident, media from all corners of the planet descended on the Tham Luang cave system to cover the increasingly tense story. Tham Luang lies under the mountains near the town of Mai Sai, in the north Thailand province of Chiang Rai.
The decision by the coach and his team to explore the caves may have proven fatal, as seasonal rains raised water levels, cutting off avenues of escape and forcing the group to seek refuge further into the cave complex. If not for the efforts of divers who ultimately saved the group, the tale would have likely had a tragic ending.
Given the enormous media focus that has raised international awareness of Chiang Rai, a decision has apparently been made to develop a museum to commemorate and describe the rescue operation at the Tham Luang caves. The area’s largely limited tourism facilities are expected to grow in the future.
The area will become a living museum to show how the operation unfolded, said Narongsak Osottanakorn, the head of the rescue mission, in news reports. “It will become another major attraction for Thailand,” he said.
Safeguards will be implemented to protect tourists from flooding during the monsoon season, which lasts from June until October.
But having arrived in Chiang Rai province, will visitors have other tourism options available to keep them busy and occupied? Absolutely! And, in doing so, they can count on experiencing a depth of Thai culture that is maybe more apparent than in the big urban centres.
Chiang Rai is touted as presenting an entirely different aspect of Thailand to visitors – one that is at odds with the sand and sea image that is commonly depicted for the country. With highlands rising to rugged mountains, the climate cools to less intense levels of heat and humidity. This is the land of the Golden Triangle.

Golden Triangle Tourism
These days, that implies a burgeoning tourism industry that is gaining traction through the mountainous scenery, the abundant agriculture and expressions of Thai culture that are evident through traditional garb, songs and devotion to the foundation faith of Buddhism.
But in decades past, Golden Triangle was the term applied to the region as a result of a busy illegal trade in opium, harvested in the hills where the borders of Thailand intersected with Laos and Myanmar (formerly Burma). This dark business has been largely eliminated by the powers of law enforcement, especially in Thailand, which has realized that the benefits of tourism in the region would be hampered by the presence of drug commerce.
But the remnants of those operations can be seen at a few museums in the area, including the House of Opium Museum, located in the town of Chiang Saen.
A tour of the museum provides an eye-opening glimpse to the bygone world of the opium trade in Southeast Asia. It presents a sequential description of the harvesting of opium bulbs, with display cases full of various opium knives. Consumption of the drug is also described, with examples of ornate opium pipes, “chillums” and other implements. There is even a model of a user in a dimly lit opium den. 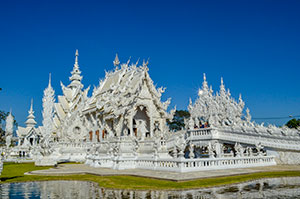 In what may be a surprise to visitors, the actual geography agrees with the term “Golden Triangle.” That is, as the Mekong River flows south into Thailand, it joins the tributary Ruak River, resulting in a triangular three-nation split. To the south is Thailand, to the northwest is Myanmar and to the northeast is Laos. All of this can be observed from a cliffside lookout on the Thailand side, just above Chiang Saen, where the geographic triangle can be clearly seen.
That was where we met a group of motorcyclists who were riding under the supervision of a guide. They revealed another unexpected aspect of Chiang Rai province – that this is one of the world’s top spots for a driving or riding tour. Participants raved about the scenically twisting, well-maintained roads that wind through the mountain terrain. Even traffic was not an issue on their week-long journey, they said.

Plantations, Temples and Elephants
Road trippers will inevitably find themselves in close proximity to the rolling, fertile fields that support a variety of crops, but are often devoted to tea plantations.
Teas from Chiang Rai province are well-regarded, and some of the best can be sampled at the Choui Fong Tea Plantation. Situated at an altitude of about 1,200 metres, the plantation benefits from the rich soil and climate of the region. It has been producing high-quality teas for nearly half a century, including Assum, Oolong, green and black teas.
At the Choui Fong Tea Plantation, rows of tea plants cascade down hillsides, where workers can be seen picking the leaves by hand. On the top of one hill is a stylish, modern visitor centre, where patrons sample teas, cakes and other treats, while taking in the mountain-framed views overlooking the plantation.
Another inevitable encounter for visitors to Chiang Rai province – indeed, anywhere in Thailand – will be with Buddhism in all its forms, including the many temples where it is practiced. 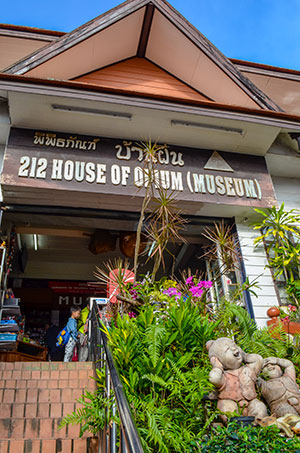 The House of Opium museum in the town of Chiang Saen

Chiang Rai is home to a particularly striking one, named Wat Rong Khun, but better known as the White Temple. It is one of the most recognizable temples in Thailand with its gleaming white walls, given more of a sparkling impact by embedded chips of glass. It is located close to the town of Chiang Rai itself, and is one of the area’s busiest attractions.
Elements of the temple and structures, such as the “bridge of the cycle of rebirth” and the “gate of Heaven” encourage visitors to reflect on Buddhist teachings. These emphasize ways to avoid worldly temptations, and instead focus on the powers of the mind.
But some visitors may find their most spiritual encounter to be at one of a growing number of elephant sanctuaries in the country. This is where elephants that have been used for logging, entertainment and riding have been rescued and allowed to live out their days in peace.
The Elephant Valley sanctuary is located near to the White Temple and was opened in 2016. Its 40 acres of lush habitat is home to six elephants that have been recovered from the entertainment and logging industries. It is modelled on the original Elephant Valley project that was opened in Cambodia.
Visitors are free to shadow the small herd of elephants as they wander through the forest, take their meals in grassy paddocks and relax while being bathed. To maintain a mostly natural environment, interactions between visitors and elephants are kept to a minimum, and the creatures are left to quietly graze on their own most of the time.
Visitors who want more than just a day in the presence of the elephants can book an overnight at a home-stay on the property… and that will give them time to reflect on the many spiritual experiences that they may have encountered in rural northern Thailand. 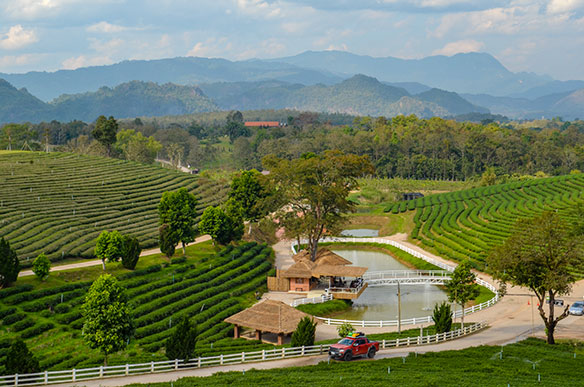