Cruising Havana in a classic car is cool 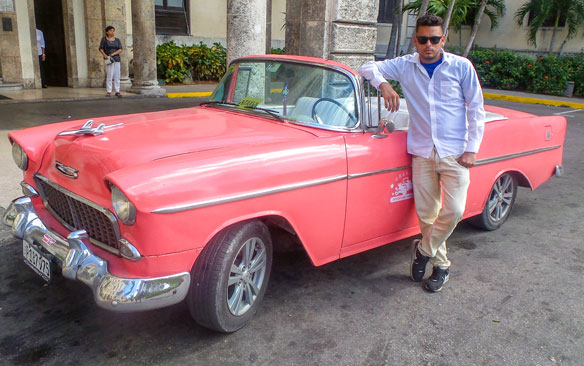 Pictured above: Luis Miguel Labrada is bucking the pink trend.

Do the rugged American-made vehicles that have been rolling along Havana streets for over half a century look pretty in pink?

Apparently many of those who chauffeur foreign tourists around the Cuban capital think that’s the case, as do plenty of visitors.

Havana-based GranCar, which has had a large fleet of mostly 1950s-era American cars that it’s used as tour vehicles for over 25 years, has now painted many of its cars pink, making them all the more eye-catching.

Patricia Diaz of the Gran Hotel Manzana Kempinski Havana, which routinely sees GranCar vehicles awaiting clients outside the hotel, says pink appears to be particularly popular with one gender.

“The pink cars are for women,” she says from personal observation.

Her coworker Claudia Fernandez Oliveros in turn labels pink cars “cute,” although she acknowledges that it’s not a colour she would choose for a personal vehicle. 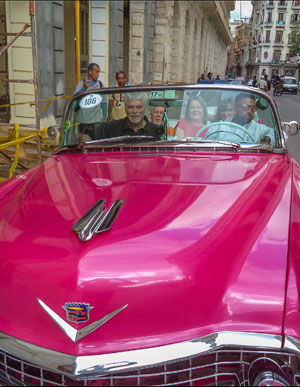 “When you come with your wife and let her pick the car, she’ll choose the pink one.”

Labrada hasn’t gone the pink route because he likes “to be different.”

He says his pink car male counterparts aren’t bothered by their vehicles being painted in that most feminine of colours.

Eloy Govea of the Cuba Tourist Board’s Toronto office says riding in one of the vehicles is fun, regardless of whether it has a highly visible hue.

“Pink, lime green or purple – unconventionality, distinctiveness is a common denominator that often fits best when it comes to describe the colours of classic cars in Havana, which are a big part of the scenery.

“If you want a testament of Cuban ingenuity, take this: more than 60,000 of them [old American cars] are still proudly running in Cuba, despite the fact that it’s been almost 60 yeas since original parts were shipped to Cuba.

“The Almendrones, as we Cubans call them, have become part of our culture, and there is a real passion for them.

“And there’s certainly a distinctive charm to travel the streets of Havana in one of them.”

Karin Sonnenberg of Kitchener, Ont., who rode in a 1950s pink Cadillac, was won over by the experience.

“Walking the streets of Old Havana was like being on the set of American Graffiti,” she says. “Most of the ancient cars, as Cubans call them, are lovingly and meticulously restored, and the roads are filled with the colourful array of Cadillacs, Studebakers and even a few Model Ts. Take the time to cruise around Havana in one. You’ll feel like old Hollywood!”

Meanwhile, Diaz is convinced the pink car trend is certain to be part of Havana’s future.