Home › Digital Post › Canadian travel to the Caribbean is heating up

Canadian travel to the Caribbean is heating up 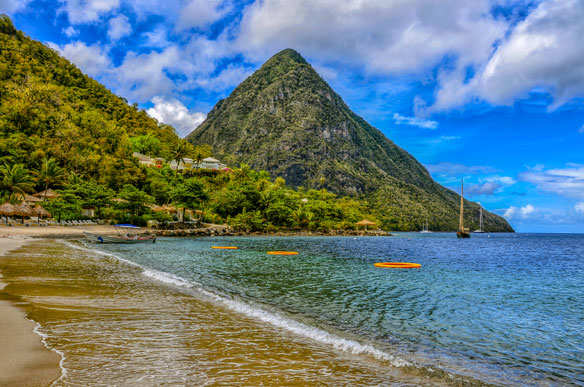 Although the US remains the largest inbound market for travel to the Caribbean, Canada came out on top as the heavy-hitter for 2018.

“It was Canada that outperformed all other markets last year with 5.7% growth or 3.9 million visits. This was due to its strong economic performance and increased seat capacity to the region,” said Ryan Skeete, the Caribbean Tourism Organization’s acting director of research, outlining the findings from the Caribbean Tourism Performance Review, which provides an overview of 2018 and an outlook for 2019. “On the other hand, the 13.9 million American tourist visits last year represented a 6.3% fall. This was due mainly to steep declines in arrivals to popular destinations impacted by the hurricanes, such as Puerto Rico, which was down by 45.6%, and St. Maarten, which fell by 79%.”

Overall, the Caribbean received 29.9 million tourist visits in 2018, the second highest on record. Even though the numbers represent a 2.3% decline from the previous year, and the first decrease in annual tourist arrivals in nine years, it’s still significantly better than the anticipated 3 to 4% falloff.

Looking ahead, Skeete noted that Caribbean tourism is back on a positive trajectory, with the last four months of the year showing encouraging arrival numbers, including across countries impacted by the 2017 hurricanes.

“The outlook for Caribbean tourism in 2019 is cautiously optimistic,” he said. “We are projecting that tourist arrivals will increase by between 6 and 7% in 2019, as the damaged infrastructure in the hurricane-impacted destinations returns to capacity. Similarly, cruise arrivals should expand by a further 4% to 5%. Global demand for international travel is expected to remain strong, underpinned by healthy economic activity.”

With a positive outlook ahead, here’s a look at what’s in store from several destinations in the region, learned at the 37th annual Caribbean Travel Marketplace held recently in Jamaica. 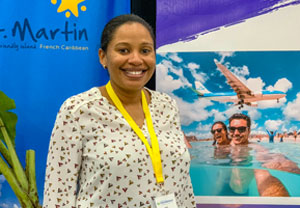 The St. Martin Tourist Board and the St. Maarten Tourist Bureau are now doing joint marketing for the destination, which was hit hard by Hurricane Irma.

Aida Weinum, director of tourism for The St. Martin Tourist Board, told Canadian Travel Press that as of December, 1,384 rooms were back online.

“The good thing is most of our hotels are all renovated so we’re very excited about that. Nightlife is back, casinos are back, the quality of food, we’re still known to be the culinary capital, the level of food has not gone down,” she added. “You can do great shopping and our 37 beaches are all back on track.”

As for upcoming developments, a Secrets is slated to open in the former RIU by the end of the year. La Playa Orient Bay is on track for a May opening, while Sonesta Ocean Point is set to open this month. Recent openings include Belmond La Samanna, and Grand Case Beach Club.

In terms of lift, she said Air Transat, WestJet, Sunwing and Air Canada are all servicing the destination this year. Overall, Port St. Maarten welcomed a total of 1,597,101 cruise passengers on 489 cruise calls in 2018, reflecting a 29% increase in visitor arrivals year-over-year. 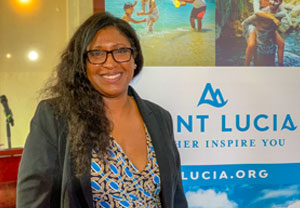 “You’ll be able to be at your desk and walk along the beach in Saint Lucia, you’ll be able to be anywhere in your home and see what it feels like to experience climbing The Pitons,” said Tiffany Howard, acting chief executive officer at the Saint Lucia Tourism Authority. “We’ve made sure this is a very interactive site, the virtual reality is there, but really it’s about making sure the site is much more functional, it’s much more inclusive, and we’ve made sure we’re much more relevant with the technology that’s available to us.”

2019 is designated as The Year of Experiences in the destination celebrating its 40th anniversary of independence, which includes a sale offering up to 40% off.

Saint Lucia recorded its best ever performance in visitor arrivals, welcoming 1,218,294 visitors in 2018. That number represents a 10.2% increase over 2017, which was also a record-setting year for the island. The US, UK and Canada are the top three feeder markets for the destination.

Recent hotel updates include The Body Holiday, which underwent a multi-million dollar renovation across the property.

For the first time, the Saint Lucia Jazz Festival will be produced in collaboration with Jazz at Lincoln Center this year. 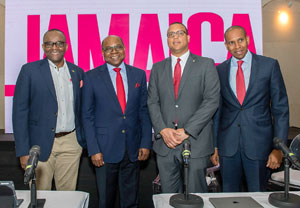 The Jamaica Tourist Board’s director of tourism Donovan White announced there are some 7,500 new hotel rooms in the pipeline, with 1,200 to 1,500 rooms going into production this year. These include the 220-room AC Marriott in Kingston by Sandals, renovations at a yet to be branded property at what used to be the Wyndham Kingston with 450 rooms, and the first part of the 1,000 room project with H10 Hotels in Trelawny.

“2018 was another record breaking year for Jamaica. Last year we did 4.31 million visitors and we’re proposing to increase by 5% overall and a 7.5% increase in stop over arrivals,” said Jamaica’s Minister of Tourism Edmund Bartlett. “This growth is going to be fuelled by the new digital marketing arrangements that are now in place, partnerships with our media friends and the trade, as well as strong airlift and expanded room counts.”

“More rooms at destination means we are expanding our capacity for growth,” Dan Hamilton, district sales manager and acting regional director – Canada for the Jamaica Tourist Board, told CTP. “More growth means that tourism’s contribution to the local economy increases, which results in more benefits to the population; expansion of local industries which support tourism; more employment for our people; more economic development and ultimately raising the stand of living for the people of Jamaica.”

In further development, Sangster International Airport in Montego Bay is undergoing a “tremendous amount of expansion and improvement,” White said.

This includes an upgraded departure terminal as well as work on the runway to facilitate larger air crafts. There are also new automated immigration kiosks for shorter processing times.

White also said the board is shifting from its Home of All Right campaign to a One Love tagline.

Jamaica also launched the Global Tourism Resilience and Crisis Management Centre, designed to help vulnerable states across the world to recover quickly from natural disasters. It will focus on four core areas of challenge: Climate change and disaster management; Security and cyber security; Entrepreneurial management and data analytics; and Pandemic and epidemic management. 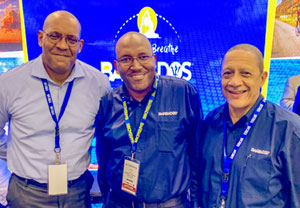 On the trade show floor are Barbados’ Minister of Tourism and International Transport, Kerrie Symmonds, with Peter Mayers and William Griffith of Barbados Tourism Marketing Inc.

Peter Mayers, Director Canada for Barbados Tourism Marketing Inc., said the Canadian, market is holding its own with a 2% increase in year-over-year arrivals.

“We’ve got good relationships with Air Canada and WestJet, and Air Canada has promised us some additional capacity for summer, which we are looking to really minimize the seasonality element of the Canadian market right now,” he said. “We’re hoping that will give us more consistency throughout the year. With WestJet we’re still four flights a week out of Toronto and hoping to grow that in the future.”

Mayers credits the opening of Sandals and the revamped Sea Breeze Beach House for contributing to an uptick in arrivals in recent years.

Meanwhile Barbados’ Minister of Tourism and International Transport, Kerrie Symmonds, told CTP the destination is “making tremendous headway with the plans to start a Beaches resort.

“We anticipate breaking soil within a month or two. We’ve already substantially completed the beachfront work, and we’re looking at what will probably be 700 keys,” he added. “It brings a very strong family-oriented all-inclusive [to Barbados], and with it then comes all the things kids like to do.”

William Griffith, the CEO of Barbados Tourism Marketing Inc. said 2019 is designated as the Year of Wellness and Soft Adventure.

“Wellness is not necessarily what everybody knows, the yoga and so on, it’s about all the unique aspects of Barbados that people don’t necessarily see on a day-to-day basis such as hiking, biking, it’s all the nature trails and taking in the beach culture, which is standup paddle boarding, the surfing, kite-surfing,” he said.

As for travel agents, Mayers said they’ve revamped the Elite Club, the training program across North America, and Barbados is profitable for the agent community.

“We’re committed to the travel agent industry,” said Griffith. “We continue to see their importance and we think that they’re a strong part of our focus to try and get business, and we believe that they’re here to stay.”