The art of Camaguey 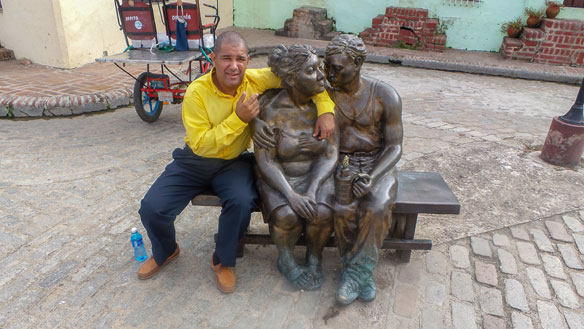 Pictured above: Infotur’s Luis Viamontes Borras sits next to one of the numerous sculptures seen in Camaguey.

Camaguey, Cuba, has an artistic bent.

Luis Viamontes Borras of Infotur says the city is home to many theatrical companies and many artists, who frequently display their creations in local galleries.

“The local government has been smart enough to promote them,” Viamontes Borras says of creative city residents.

Among artists selling their creations in a gallery are Joel Jover and Ileana Sanchez, who report that Jill Biden, wife of former US vice-president Joe Biden, visited their retreat, the walls of which are lined in part with images of famed 1960s rock musicians, such as Jim Morrison and Jimi Hendrix.

Viamontes Borras adds there are other distinguishing qualities to his city, including an urban layout that he says is unique in the Caribbean and which locals dub “the broken dish pattern.”

Cuba’s third-largest city, burned once during a slave rebellion and another time by pirate Henry Morgan, also displays different architectural styles, which include colonial and Moorish influences, the latter a reflection of its being founded in part by settlers from southern Spain.

The city celebrated its 500th anniversary in 2014, and saw a lot of restoration for that milestone.

City cultural highlights include the Contemporary Ballet of Camaguey.

The Casablanca lounge recalls the movie of the same name.

Meanwhile, Viamontes Borras says among one-time visitors to the Camaguey was American mobster Meyer Lansky, whose name is more frequently associated with pre-revolution Havana. “He was very discreet about his time in Camaguey,” Viamontes Borras adds.

Among Camaguey lodging options is the upscale Hotel Sevillana, which began life as the home of a wealthy city resident. The long-standing structure has influences that tell of that Spanish city of Seville, with which Camaguey has long ties.