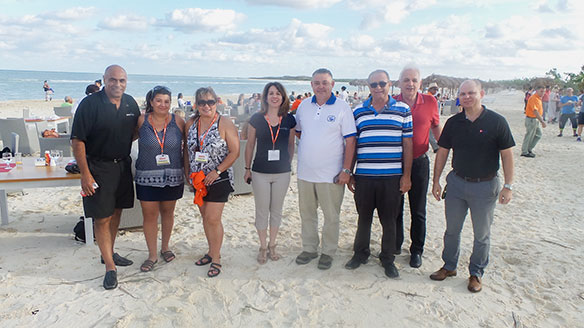 (Photo above: The Meliá Jardines del Rey was the host hotel for the Sunwing/Cuba Tourist Board fam and held a breakfast on a beach for the participants. Seen here are Gustavo Moor of Sunwing; Danuela Freel of 4 Point Travel in St. Catharines, Ont.; Sheila Aue of Travel Professionals International in Mississauga, Ont.; Gina Mallamo, Meliá Hotels International Cuba, Canada; Carlos Latuff, president, Gaviota; Narciso Sotolongo and Silvano Stupar, Meliá Cuba Hotels; and Eloy Govea of the Cuba Tourism Board.)

Sunwing’s senior Cuba-based official says Quebec and Ontario travel agents who visited Cuba’s Jardines del Rey region last weekend left believing it is deserving of a clean bill of health following Hurricane Irma, which battered the islands found off Cuba’s north coast in September.
Sunwing and the Cuba Tourist Board brought some 140 travel agents to Jardines del Rey on Oct. 29 for a 24-hour fam, eager to convince them that an area that’s a cornerstone of Cuba’s tourist trade and which Sunwing has a large presence in is again ready to receive visitors.
The islands of Cayo Coco, Cayo Guillermo and Cayo Santa Maria were closed to tourists following Irma, with authorities working to repair damage to hotels and other infrastructure.
Most hotels on the islands were to reopen Nov. 1, and all are expected to be open Nov. 15. However, Cuban tourism officials have been concerned that many looking for sun vacations may avoid Jardines del Rey, concerned there’s still widespread damage.

Expectations exceeded
“They [visiting agents] are really impressed with what they’ve seen so far,” Alejandro Vazquez of Nexus Tours, which works with Sunwing, told Canadian Travel Press on Oct. 30. “They had certain expectations. Their expectations have not only been met, but exceeded. I have spoken to almost all the agents. They’re not concerned [about Jardines del Rey’s readiness]. They’re confident they can start selling this.”
Eloy Govea of the Cuba Tourist Board’s Toronto office – who was on the fam – said his seeing the different islands leaves him “without any doubt that 100% of hotels will be ready for Nov. 15.”
However, many hotel officials acknowledge the first couple of weeks following the reopenings may see relatively few guests.
Many hotels have had crews working around the clock as they prepared to reopen, with shift changes enabling work to continue non-stop.
Lessner Gomez Molina of Cuba’s Ministry of Tourism is asking agents to “trust us” when local officials state all will be up and running by the middle of this month. “It’s going to be more beautiful. And all the hotels will be ready and all the services will be ready.”

Something different
Mohamad Fawzi Gonzalez of Blue Diamond Resorts said Irma “has been an opportunity for us to do a lot of things we wanted to do before.” Many hotels forced to close after Irma used their closures not only to make repairs, but also undertake renovations.
Cuban tourism minister Manuel Marrero has also said that Irma deposited more sand on local shores, expanding the beaches that are the core of Jardines del Rey tourism.
Fawzi Gonzalez noted Cayo Coco – the largest of the islands in Jardines del Rey – has seen a lot of rain since Irma, leaving an island that lost vegetation during the storm to once again look green.
“Now, we have a new product,” said Fawzi Gonazlez “They [visitors] will see something different.”
He welcomed Cayo Coco beaches receiving additional sand thanks to Irma.
“Apparently bad things can bring good things,” he said.
Fabricio Villanueva, general manager of the Ibersotar Playa Pilar on Cayo Guillermo said damage to his property mostly amounted to broken glass and toppled vegetation.
Hotel staff among other things planted some 900 coconut trees as part of re-greening resort grounds, he reported.

Up and running
“Everything is up and running. Even if we don’t have clients, we’re ready to go. The only thing we need is clients,” said Villanueva, who conceded some people may be leery about visiting Cayo Guillermo this month.
Meanwhile, one of the agents on the trip, Danuela Freel of Four Point Travel in St. Catharines, Ont., said resort employees were eager to see Canadians return.
“You can feel the vibes and see it in their faces. Every single staff member is eager and excited to offer their high energy, and entertain-
ing, gracious services,” she said. “They have missed spoiling Canadian travellers. “Canadians should take advantage of the great deals. Enjoy the attention to service provided, visit Cuba now, tip them generously, and enjoy their heartfelt hospitality. They deserve it.”