Curaҫao is a painter’s paradise 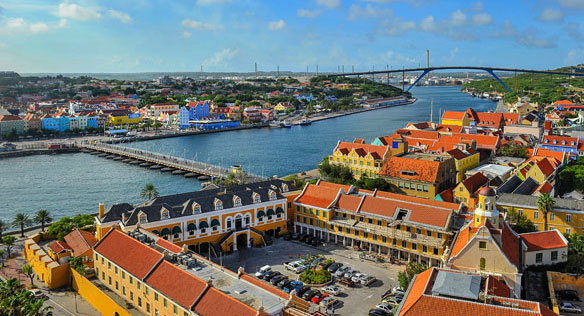 Pictured above: Curacao’s capital of Willemstad has distinctive Dutch architecture.

CuraÇao can be picture perfect for people wanting to brush up on their art skills.

The CuraÇao Tourist Board held a recent event in Toronto overseen by prominent Curacao artist Garrick Marchena, whose island has long-established ties to Holland, which produced such household names in art as Rembrandt and van Gogh, and has a flourishing art scene, underscored by murals that are appearing on the island.

“CuraÇao is different,” says Kadesha Salome of the tourist board, noting its population is a blend of peoples, and the island features desert-like landscapes, a contrast with most of the Caribbean. Those landscapes, in turn, have flora and fauna not found on most Caribbean islands. Local vegetation includes both flowers and cacti.

Off-roading excursions and biking are among ways of exploring CuraÇao, which has more than 35 beaches and offers plenty of watersports activities, Salome said.

Distinctive-looking Dutch architecture can be seen in CuraÇao as well, telling of the long ties between Holland and CuraÇao, which also has Spanish and Portuguese influences.

Its capital of Willemstad is a UNESCO World Heritage Site.

The number of Canadians visiting CuraÇao is on the upswing, with Air Canada, WestJet and Sunwing all linking it with Toronto this winter.

“It’s just a hop, skip and a jump from Toronto,” Michelle George said on behalf of the tourist board.
Tourism authorities note that their island is outside the Caribbean’s hurricane belt, and Salome said its dry climate means visitors can expect sunshine. “You can come to CuraÇao year-round and don’t have to be hiding inside.”

Among local hotels is the Santa Barbara Beach & Golf Resort, which offers the likes of golf, tennis, and a spa, and which will host weddings and meetings.

Marchena told Canadian Travel Press that his island’s features make it a “painting paradise,” with artists able to find plenty of images that they can recreate on a canvas, among them “beautiful birds” such as parrots and parakeets.

Meanwhile, the encouraging Marchena had kind words for those who turned out for the tourist board’s event at Toronto’s Paint Cabin, which among other things routinely hosts workshops for those who enjoy sitting down in front of an easel.

Participants were invited to recreate an image of a parakeet on their canvases.

“What you guys are doing is awesome,” Marchena told the gathering.