Cuba is accommodating visitors with a new flair 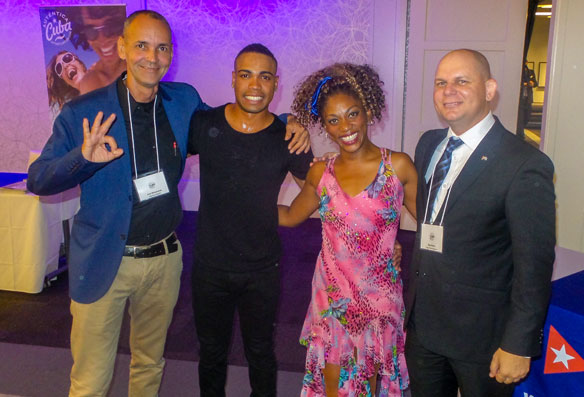 Pictured above: On hand for a Cuba Tourist Board event in Toronto were Ernesto Manzanares of the Faro Luna Diving Center in Cienfuegos; two salsa dancers; and Eloy Govea of the tourist board’s Toronto office.

Canadians planning to flee to Cuba in the coming months to escape Old Man Winter’s icy grip will arrive in a Caribbean country home to a number of enhancements to its tourism infrastructure.

Other welcome arrivals include Varadero’s Cubanisimo by Havanatur, a club located in the Roc Arenas Doradas hotel. The club offers the likes of Cuban dance classes, baseball and domino games, and other popular facets of Cuban daily life.

Ayala noted that a long-stays program called Happy Age has been put together by Cuban Medical Services and is designed for those aged 75 to 85 who are healthy and active.

Among those on hand for the Toronto event was Ernesto Manzanares, a diving instructor at the Faro Luna Diving Center in Cienfuegos, who said his homeland has many great diving sites on both its northern and southern coasts. Authorities have identified around 40 dive sites in the Cienfuegos area alone, with divers able to spot the likes of sunken ships, coral and tropical fish.

“Cuba is not just sun and sand,” Ayala said.

“It’s a diverse destination with a wide range of products and options for all ages, preferences that can be enjoyed throughout the entire year.”

She reported that the Cuban government is “working intensively” to expand WiFi to all tourist facilities.

Tourism authorities say the island has fully rebounded from last fall’s hurricanes and expects to welcome a record over 4.7 million people this year. Canada remains the country’s largest market.

The evening also featured salsa musicians and dancers, with the tourist board’s Nieves Ricardo – noting her compatriots’ love of salsa and other musical genres – stating, “If you do a tour in Cuba, it’s like a tour around sound [music].”