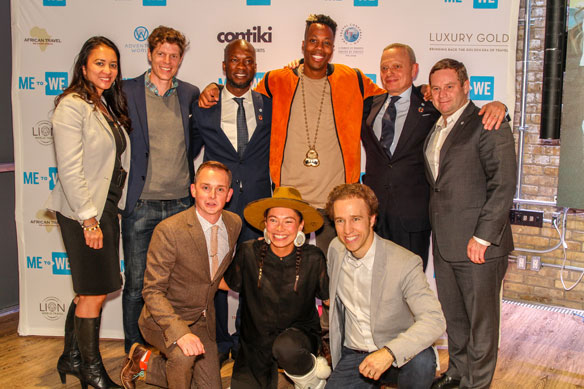 “We’ve learned many lessons,” said Brett Tollman, chief executive of The Travel Corporation (TTC), when asked about TTC’s TreadRight Foundation’s first decade, explaining: “We keep learning, which I think is part of any successful process.”

Tollman told Canadian Travel Press during a recent interview that one of the key lessons that TreadRight learned was that: “Initially, we let our brands choose their projects and then we’d try to assist them with managing the charitable foundations which they chose. Subsequently, we found it much better if we let them get on with selling and marketing their brand specifics and leave it to the experts [at the TreadRight Foundation].”

Pointing out that early on, TreadRight “funded $300,000 to WWF on a project in Australia with an indigenous tribe around where we operate in the Northern Territories, and secondly, we gave $300,000 to the Conservation Foundation to support a local tribe in the Atlantic Forest and we seemed to see very little, in terms of the impact on the ground, from either of those investments.”

As a result, he said: “We found subsequently, working with different organizations that there were more effective ways to be meaningful, and it was less about money than the actual projects.”

A third lesson, or perhaps, development would be a more appropriate way to describe it, is the TreadRight Foundation’s involvement with Craig and Mark Kielburger of WE and ME to WE.

Tollman observed: “Becoming more focused on and involved with WE and ME to WE – in a number of ways – allowed us to achieve one of our key priorities which was always to offer for the travelling public, purpose-driven travel, which I certainly believe is of growing interest and demand in the world, as more and more people look to do something meaningful in their lives – not just fly to a destination and lay on a beach or do some general exploring.”

But Tollman, who has personally taken his family on ME to WE trips to both Kenya and India, notes that “those are just three learnings, and as I’ve said, I think we keep learning.”

ME to WE and TreadRight
The TreadRight Foundation’s relationship with ME to WE started about seven years ago, “where we supported them with in-kind services in the UK for their WE DAY,” Tollman said.

That support continues today, but TTC chief executive continued that: “Four or five years ago, I got to meet Craig and Mark personally, and just the more time one spends with them, the more you see the opportunities and demands on them and the communities that they try to help and it’s obviously an endless opportunity to support them more. So, I think, we’re just starting on our journey with seeing how we can do more to help them in as many ways possible.”

He told CTP that: “My wife and I support them personally from a charitable contribution standpoint. We’re a platinum sponsor of WE Day Los Angeles together, and then we also provide them with some significant funds to do whatever they want – whether it’s supporting one of the destinations or building a hospital or a university – which we helped fund – in Kenya last year.”

Ask about his commitment to ME to WE, Tollman responded: “I consider myself a disciple. I’m more than committed. It’s a lifelong commitment I’ve made personally to do what I can to help these two remarkable individuals [referring to Craig and Mark Kielburger].”

Making travel matter
To mark the TreadRight Foundation’s 10 years, a new video has been released that tells the organization’s story so far.

“Going forward [we want] to do more to communicate the importance of making travel matter and not just going somewhere and leaving a footprint and not much else behind – which again, I think, is the growing desire and expectation from more and more people. So the sooner that more travel advisors get behind it, I think, the more benefit for them as well as [for] the communities and charities,” Tollman told CTP.

Certainly, one of the messages that Tollman has been delivering to agents for quite a while now is the power of purpose-driven travel and the trips that are available from TTC tour brands and from ME to WE, telling CTP: “Speaking personally about it, I can fully endorse that these are some of the most fulfilling, enjoyable, meaningful holidays or trips that you can take, especially as a family.”

He said that “an agent who has a family looking to do something different; who maybe don’t want to do an ocean cruise or a river cruise again – we highly recommend them because it’s a way to really bond with your children. It’s a way for you to give back to another community. It’s a way for you to see your children’s hearts and minds open up to how privileged they are and how fortunate they are without us [as parents] having to drone on about it. They get to see it in person; and [they’re] great value as well, in terms of what the price points are for the 3 ME to WE trips; and I implore them to do a little training, do a little research.”

Agents can book the trips through any of TTC’s brands or through ME to WE itself, with Tollman noting that ME to WE has “a fantastic web site – https://www.metowe.com/volunteer-travel/ – so it doesn’t take a lot to just understand what it is they’re selling or to get someone on the phone from one of our teams to help convince them [the client].” 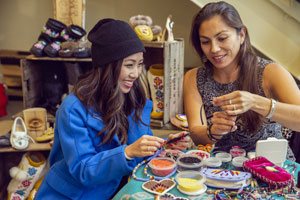 Taking a class at the Manitobah Mukluks Storyboot School at the Bata Museum in Toronto.

Putting the right foot forward
The Manitobah Mukluks Storyboot School is a relatively new project for the TreadRight Foundation. The school, which it is funding, is housed at Toronto’s BATA Shoe Museum and indigenous artists and artisans teach indigenous and non-indigenous kids how to make traditional mukluks and moccasins.

As well, the Storyboot School is included on Trafalgar, Insight, Luxury Gold and Contiki itineraries that come through Toronto.

“For some time, we wanted to do some projects in North America. Canada is certainly very near and dear to my heart. I think Canadians are some of the best people in the world, and so, I’ve always wanted to give back with a project in Canada – not just from a charitable donation standpoint, but one where we could help bring our travellers to.”

He explained that: “The wonderful aspect about this project [the Manitobah Mukluks Storyboot School] – which I’ve personally gone to with Jeff [Element] two years ago – at the BATA Shoe Museum, you know, is that we can bring our travellers there. They can actually meet some of the [artisans] and understand how they make the shoes … as well as having the opportunity to buy one of the creations.”

As for how agents can get involved, Tollman said that they can donate to the school or sell TTC trips that include the Storyboot School on the itinerary. As well, the school is open to anyone, so if retailers are interested, they can sign up and take the classes.

What’s next for TreadRight?
Ask Tollman what’s next for TreadRight and he’s quick to respond: “Certainly through travel and learnings – especially from WE – one has a profound understanding for how important clean water is. Going to India and Kenya and seeing how women and children are empowered to get an education or have time for work when they’re not having to schlep to and from dirty rivers to collect water 20 or 30 times a day and which then makes them sick because the water is not clean and what a water well can do for a community.”

And with that said, he told CTP that as its next project with ME to WE: “We have chosen this community that they want us to work with in the Ecuadorean Amazon which we’re funding a water project going forward; in addition to the other support that we’ve given in the past around school building and so forth. So, we’re very excited about that.”

Tollman continued: “Certainly water is one of the key aspects of our Planet Pillar, which is one of our Three Pillars that we’ve refined our messaging around – Wildlife, Planet and People. So woman empowerment, for example, comes under people. Planet involves our CSR – plastic elimination and reduction projects to water projects, for example. Then the third one [People] ties into everything else.”

Over its first decade, the TreadRight Foundation has been a staunch supporter of women, with projects that give them a platform to practice their arts and crafts.

And, in this respect, Tollman tells about a trip he made with his wife to Jordan in February 2018, making a stop at a women’s enterprise just outside of Amman.

A wonderful example
The Iraq Al-Amir Women’s Cooperative was established by Queen Noor of Jordan in 1993 and employs about 150 women who, Tollman told CTP haven’t been paid in three or four years.

The women do pottery, paper making, cooking and some weaving, and they have a gift shop that they sell it in; but unfortunately, there is not a lot of foot traffic coming in, and they needed work to help repair some of the kitchen equipment and to build out the gift shop.

“Having been there, we turned around very quickly and have provided them with a significant grant, as well as, my wife and I paid to replace all of their kitchen equipment personally, so that they’re now ready to take groups” Tollman recounted.

“Then we moved very quickly and now all of our brands that go into Jordan – Lion World, Trafalgar, Insight and Uniworld – will be visiting this cooperative [beginning in 2019] and having a meal there and spending time learning about their pottery making,” Tollman explained, adding that: “I did the cooking, so people will do that and/or some paper making or weaving. Then they’ll get to cook for them, and we’ll be generating a significant, consistent source of income for them, so that they can all get paid a regular salary, as well as pay their bills on time – which they haven’t been able to do in the last several years.”

The upshot, TTC’s chief executive said that Iraq Al-Amir Women’s Cooperative is “a wonderful example of empowering women and helping people on the ground in a meaningful way.”
For more on the Cooperative, go to https://www.treadright.org/project/iraq-al-amir-women%E2%80%99s-cooperative.

Summing it up
As Tollman will tell you, the TreadRight Foundation has “come a long way,” but he’s also quick to point out that “we’ve got a long way to go.”

“Our drive to eliminate all unnecessary single-use plastics is an absolute commitment throughout the organization. It’s wonderful, when you see some of the examples of some of the things that we’re doing. Jeff [Element – president, TTC Canada] led the way with eliminating all single use plastics in our offices here, and we’ve now adopted that across all of our 35 offices,” said TTC’s chief executive.

He continued: “We’ve eliminated all single-use plastics, with a few exceptions, on board all of our Uniworld ships and at all of our Red Carnation properties; and this is the first time we’re trialing a silicone, charcoal-filtered water bottle which Contiki will be giving to its guests this coming year, as a way to try to eliminate the thousands and thousands of plastic water bottles which are used by our guests on the road.”

And he concludes: “But again, you can’t rest on your laurels. There’s so much more to do.”