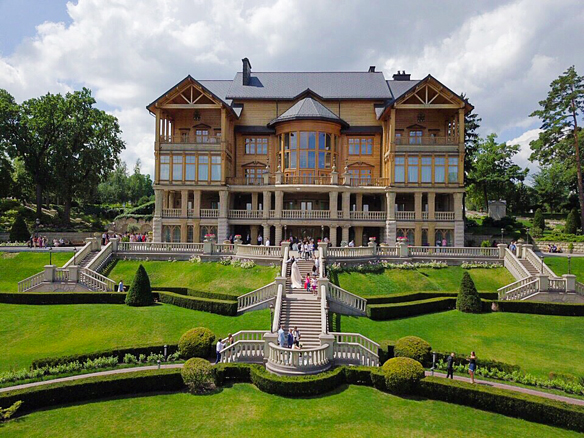 An impressive home is part of Ukraine’s Museum of Corruption

It’s a safe bet that the man who inspired Ukraine’s Museum of Corruption doesn’t plan to set foot in it or any other part of Ukraine anytime soon for that matter.

The Kyiv-area museum recalls the opulent life of former president Viktor Yanukovych, who was reportedly dipping his hand in the public till in a major way until he was ousted from power in 2014 and fled to Russia, where he’s now keeping a very low profile.

JC Travel guide Anastasia Lazo says visitors can tour the sprawling retreat – commonly called Mezhyhirya – that was once a nature preserve, and is now home to the likes of what’s dubbed a health complex that features a gym, sauna, boxing ring, and bowling alley, while the main dwelling has chandeliers and expensive Lalique French furniture.

Other features include a tunnel linking the health complex and the palatial home and a replica of a piano given to Yoko Ono by John Lennon.

“You are impressed when you realize what he left behind,” Lazo says. “Imagine what he’s taken. Ukraine has a history of corruption, but this is extreme.”

Yanukovych used to retreat to the site with his mistress, carefully hiding its existence from his wife, who only learned about it when it was finally shown on television.

Lazo says some find the dwelling “vulgar and tasteless,” while museum staff see it as a great showcase for Ukrainian craftsmanship.

She adds that some visitors from Japan – where land for homes can be in short supply – become emotional when seeing it because they view the large site as wasteful.

The museum is now privately owned, with the ownership somewhat murky. The site has generated revenue in part by selling souvenirs ridiculing both Yanukovych and Russia’s Vladimir Putin, with Putin appreciating Yanukovych’s efforts to maintain strong Ukraine-Russia ties when many Ukrainians wanted their country to shift more towards Europe.

Lazo says Yanukovych has remained out of sight since jumping ship for Russia. “We don’t know his postal address.”

“Tourists love it,” she says of the often-grandiose site. “They say it’s like the Palace of Versailles, but more modern.”

Kyiv-based JC Travel can arrange tours to the museum and other parts of Ukraine. Its website is http://enjoy-ukraine.com/.