Home › Digital Post › Something is definitely brewing in Lviv

Something is definitely brewing in Lviv 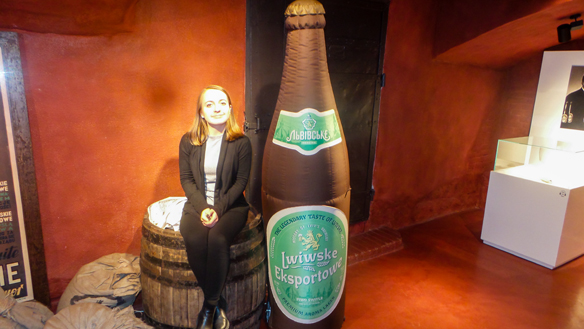 Hanna Kitsilinska takes a break beside a large reminder of Lviv’s brewing tradition.

Does German ale pale when compared to beer produced in Ukraine?

Kitsilinska, who works for the tourism office in the Ukrainian city of Lviv, says her sister is now working in Germany – known in part for its beer – and believes the suds there aren’t the equal of those back home.

“She misses our beer,” Kitsilinska reports. “She says it’s harder to find good beer in Germany than it is in Ukraine.”

Kisilinska’s hometown has a long history of brewing, underscored in part by the Lvivarnya Beer Cultural Experience Center, where beer has been produced since 1715 and which today serves as both a brewery and a museum.

Those touring the three-story site can learn about beer’s origins; its lengthy history in Lviv, where it was once commonly found among traded goods; and also sample some of the suds produced there.

Features include a ceiling made from beer barrels.

The building’s beer has won awards, and its Lvivske brand was once routinely shipped to the Kremlin, with those at the most senior levels of Soviet leadership apparently having developed an appreciation for it.
Beer Cultural Experience Center Lvivarnya’s Viktor Nyemyets says bending your elbow in Lviv may be the secret to a long life, with some believing that “if you drink Lviv beer, you will live 100 years.”

GreGG Truman of Ukraine International Airlines’ North American office has visited Lviv and says it has a flourishing beer scene and justifiably so.

“If you want to drink great Lviv beer and experience the beer culture, you need to come here,” he says. “The beer here has character and backbone.”