Home › Digital Post › Diners can have a date with The Executioner

Diners can have a date with The Executioner 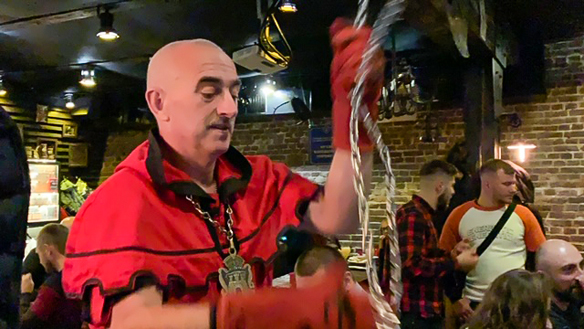 How low can a restaurant guest go? Meat and Justice’s The Executioner prepares to lower a caged guest.

The First Lviv Grill Restaurant of Meat and Justice gives definitive examples of how justice was once meted out.

The Lviv, Ukraine, restaurant has gruesome Medieval torture devices on display, including a stretch rack found just outside its entrance and the type of metal cage hapless sorts were once locked in, possibly left in it to die of hunger or thirst.

The restaurant’s cage is immediately above a deep hole in the floor and is attached by a chain to a hoist-like mechanism, enabling a red-tunic-sporting employee whose business card simply reads The Executioner to lower below floor level and then raise guests who accept his dare to be locked into it. At one point, he’ll threaten to empty a bucket filed with an unknown substance in it on the caged individual. (He doesn’t follow through with the emptying.)

“The interior and atmosphere tells you about a legend of an executioner in Lviv,” says Taras Maselko, spokesman for !Fest, which has numerous themed restaurants and bars in the city. “The executioner was, in fact, the first municipal employee in Lviv. He was a public and peculiar personality. If the executioner died, the next person to be executed was spared. He had several duties aside from executions and torturing: garbage removal and protection of city prostitutes.”

A restaurant menu describes other fiendish devices used long ago to punish those authorities believed to be in need of a drastic lesson, among them the Iron Maiden, which looks somewhat like an upright sarcophagus and has spikes on the interior side of a swinging door that would impale the wretched sort placed in it.

It has been centuries since the type of torture items found in the First Lviv Grill Restaurant of Meat and Justice were actually used to bring lives to a grisly end, but there’s still a segment of the public that’s fascinated by them, Maselko adds.

“Sometimes our guests bring their friends there and ask The Executioner to put them in the cage,” he reports.

Maselko adds that the restaurant fittingly has a meat-heavy menu.

“Who knows more about meat than the city executioner?” he notes.