Home › Digital Post › Disney taking agents to Infinity And Beyond!

Disney taking agents to Infinity And Beyond! 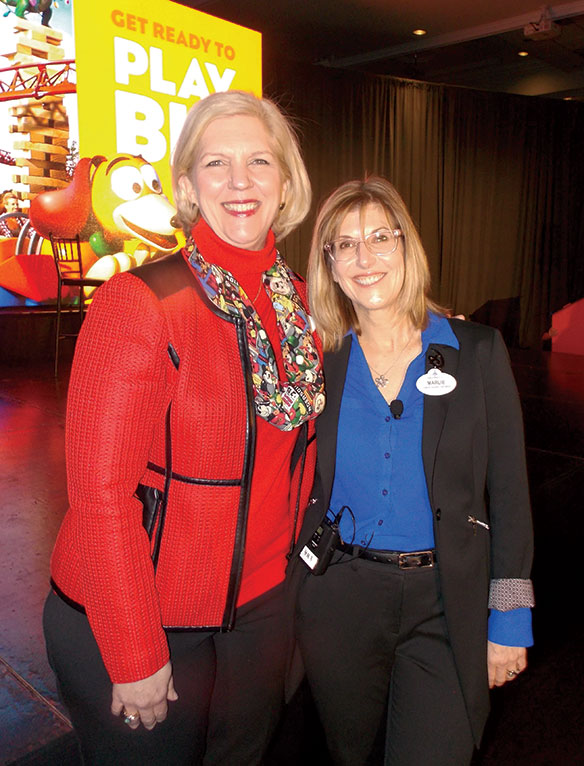 One of the first things that Claire Bilby, senior vice-president, sales & service for Walt Disney World, told a group of about 300 travel agents and tour operators in Toronto recently was “my team and I are your advocates – you’ve got a friend in us.”
Rather appropriate considering that Bilby was leading the Toy Story Land North America Tour which is all part of the celebrations leading up to the opening of the all-new Toy Story Land – located at Disney’s Hollywood Studios – that’s set to open on June 30 of this year and where visitors will have a chance to meet the icon characters of Pixar’s Toy Story films – Woody, Buzz, Jessie, Slinky Dog, the Aliens, the Green Army Men, and many, many more.
In fact, agents and operators in Toronto – which was the first stop on the Disney Toy Story Land North American tour – had a chance to meet a few of the characters, including the Green Army Men, Woody and … even Buzz.
But with Disney, there’s always more magic, as the company has a host of openings, new products, special events happening at the Walt Disney World Resort and Disneyland; aboard Disney Cruise Line; with Adventures by Disney; and at the Aulani, A Disney Resort & Spa.

To Infinity and Beyond
And clearly, with all that’s happening this year and next, Canadian travel agents have a significant role to play, with Bilby telling her audience that: “We need you to tell our story to your clients.”
Speaking with Canadian Travel Press, Bilby noted that Canada is “a very large market” for all of Disney’s businesses and particularly for Walt Disney World, Disneyland and Disney Cruise Line.
“Travel agents really play a critical role in driving that business, whether it’s through our own Walt Disney Travel Company or through all of our great partners, like Air Canada Vacations and TravelBrands.”
Yet with all of the new things coming online at Disney, Bilby is keenly aware of the amount of information that will be coming at agents in the next little while.
On that point, she observed: “It’s really important for us to make sure they’re educated because of the consumers, we know they love to go to travel agents to get the information, and it’s important that [agents] can give them the ‘real-time’ news of what’s going on.”

Lots of support
To support agents, Bilby says that Disney is doing a number of things, telling CTP: “Our sales managers are always in the agencies doing training. On www.disneytravelagents.ca/ , we’re now doing biweekly webinars – always on different subject matter that they can come [online] and learn about. We have the College of Disney Knowledge, and then, we have different fam programs at our different destinations [and on our] different products where they can learn [about them] first-hand.”
Asked whether Disney has been seeing increased demand for education and training from agents, Marlie Morrison, managing director, marketing & sales Parks and Resorts – Canada/Asia Pacific for The Walt Disney Company (Canada) Ltd., noted that “with all the new things that are coming from Disney and their destinations, [agents] are asking for more.”
Morrison continued: “To Claire’s point, we’re going to be delivering webinars biweekly now, and I think that will help them keep up to date with everything because there is a lot coming, this summer, next summer, etc., so we’ve definitely seen people asking for that information.”

Time keeps on ticking
In this respect, Bilby told CTP: “What we’ve also found is time is precious for everybody, and we’ve made a lot of announcements about [what’s going on at] our destinations. So, the webinars are nice because we focus on one thing [in those webinars.]”
She pointed out that some agents may want to do an Adventures by Disney session, while others may be interested in the webinar on Disney Cruise Line, while still others may look for training on other Disney destinations and products.
In this respect, Bilby said: “We chunk it up for them, and we actually have experts from the businesses. We have found for us that if we give them little chunks and give them ongoing [education] that works better versus trying to do the two hours every month sort of thing because time is so precious.”
Along with the webinars, Disney also offers agents a range of social media channels, and she said in Toronto that moving forward, Disney “will be reaching out to agents in new ways to let them know that we’re there for them.”
As for the take-away for agents, Bilby told CTP: “I want them to know that we are there for them and that we’re there to work with them. Whether that’s with their [Disney] sales manager or whatever, I want them to feel like they’ve got one-stop shopping for any of their questions and the support that they need.”
For more, Canadian agents can go to www.disneytravelagents.ca/ – and which Bilby said will soon be updated based on input from agents.