Home › Digital Post › The 25th anniversary of the greatest show on earth!

The 25th anniversary of the greatest show on earth!

(Photo above: The beautiful Mirabell Palace & Gardens in Salzburg.)

On May 21, 2011, my visit to Vienna, this particular time, did not prepare me for what was the greatest show on earth known as, Life Ball, an annual event taking place this year on June the second, 2018 supporting HIV/AIDS awareness and prevention since 1993. The organizer and co-founder, Gery Keszler, had the vision and passion to create a spectacular platform to reach the LGBT community and its allies during a time of denial and ignorance.
Since my first Life Ball, I’m in awe of the artistic creativity, pageantry of fashion combined with notable philanthropists, influencers, politicians, and performers taking to the stage to voice their support and unwavering commitment through song and using their clout to make a difference.
To name drop a few of those A-list celebrities that have graced the stage: Elton John, Bill Clinton, Naomi Campbell, Sean Penn, Mary J. Blige, Sharon Stone, Charlize Theron, Janet Jackson, Brooke Shields, Roberto Cavalli, Jean-Paul Gaultier, Heidi Klum, Canada’s DSquared (Dean and Dan Caten), and the list goes on – really!
This year marks the 25th anniversary of Life Ball, and it will take place at the “Rathaus” – Vienna City Hall built between 1872 – 1883, architecturally styled in neo-Gothic – which complements this lavish event and is the backdrop where artists will take centre stage to create the greatest show on earth!

Festivities galore
Days prior to Life Ball festivities, there are many teaser events leading up to the Life Ball and details to what’s going on can be found here: www.lifeplus.org/en/ and for other happenings visit: www.wien.info/en/vienna-for/gay-lesbian .
In addition, celebrations of artistic awesomeness are taking place with the “Beauty and the Abyss,” as it’s being referred to, marking the 100th anniversary honouring since the deaths of Gustav Klimt, Egon Schiele, Otto Wagner and Koloman Moser and showcasing their works of art /architecture with a retrospective of various exhibitions, performances and installations throughout 2018 for an incredible art-filled pre- and post-Life Ball stay. Visit: www.wien.info/en/sightseeing/vienna-2018 . 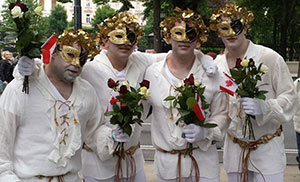 What to expect
Just to give a short and sweet glimpse of what to expect and to whet your appetite, if your European summer plans include Vienna – book early for tickets.
Upon arrival, the magenta carpet awaits you for a grand entrance (on a side note, there are style police to ensure you’re in theme and in costume and gates open at 7:30 p.m.) and the option for a 6 p.m. gala-esque dinner before the show which in itself is decadent with Moulin Rouge-inspired décor that will take your breath away.
Once inside the show grounds, quench your thirst with a beverage or two (who am I kidding!) and get ready for the 10 p.m. showtime start and let the magic begin. The show itself is a mini concert with headlining artists followed by inspiring keynote speeches and ending the night with one grandiose fashion show.
Actually, there’s more inside the Rathaus after the show. There are various performances, pop-up dance floors with headlining, such as Hector Fonseca (hectorfonseca.com), martini lounges, outdoor terraces within the city hall and so much more to revel in until the wee hours of the morning.
For more information on the style bible, refer to www.stylebible.org , and for travel logistics and tickets to Life Ball, contact armando@baxter.net for details.

What’s the theme in 2018?
Every year, Life Ball adopts a theme, and this year it’s an homage to the “Sound of Music,” which premiered in 1956, and was filmed primarily in Salzburg and continues to touch the hearts of millions around world.
My last visit to Salzburg included a tour of some of the iconic areas where the “Sound of Music” was filmed and brought back a flood of memories of my childhood, as I re-enacted some of my favorite scenes.
The picturesque Austrian Alps sets as the city’s backdrop with baroque architecture, squares and cobble stone streets lined with cafés and shops oozing with charm. The birthplace of W.A. Mozart and residence until his early twenties before moving to Vienna are now museums, and his image and influence can be felt throughout the city and a “must-do” during your stay is a Mozart dinner/show that transports you to the 1700s.
There are many options where to stay depending on your budget, one of my favourite hotels is the family owned and home to the original “Sache Torte“ – Hotel Sacher Salzburg located in the heart of the city. One of the classiest properties in Salzburg offering a high level of deluxe services with impeccable décor throughout the hotel.
For more information, visit: www.salzburg.info/en and www.sacher.com/en/hotel-sacher-salzburg/ .
Armando Mendonça is a tourism entrepreneur, philanthropist supporting HIV/AIDS charities, and lifestyle & diversity columnist. He can be reached at: armando@baxter.net .