Ontario: ‘The place to be’ 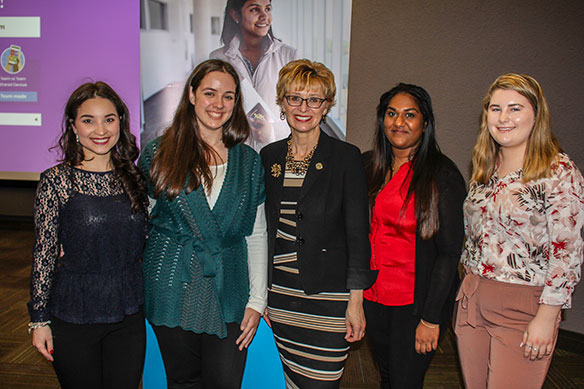 Travel and tourism students at Humber College in Toronto received a nice show of support March 7 when Ontario Tourism Minister Daiene Vernile dropped by for a keynote address.

The newly appointed minister wished students well, asking them jokingly to graduate soon, as they are needed in the field.
“Stakeholders in the industry are looking for skilled staff,” she said. “Ontario tourism needs professionals like you.”
Vernile noted that the tourism sector employs 389,000 people and is the province’s largest employer of young people.
She added that the tourism industry in Ontario is flourishing, with 2015 numbers showing that tourism brought in $32.5 billion, with 2016 and 2017 numbers expected to top this.
“The Ontario tourism industry is picking up momentum, and that’s modest. It’s beyond momentum,” said Vernile. “Ontario is quite literally the place to be.”
The tourism minister said projects like the “Where Am I?” campaign and last year’s giant rubber duck that toured parts of the province – and was initially criticized – have proven very successful.
“Our challenge is to get our message out, in front of eyeballs,” said Vernile. “We’ve done a great job welcoming people and making them feel welcome. We want them to come back and spread the word. We need to create authentic, market-ready products.”
She sited indigenous tourism and Francophone products as “special, different,” and key to future growth. Significant investment will also be made in Northern Ontario.
Other projects include the revitalization of Toronto’s Ontario Place and continued investments in festivals and special events, both of which create jobs and bring in money. Tour by Bike, Ontario’s Cycling Tourism Plan, was launched last April with a goal of positioning Ontario as a premier cycling tourism destination.
Also on hand at Humber was deputy tourism minister Richard McKinnell, who noted that one of the challenges is that Ontario is not known for any one thing.
“It’s really about diversity. There’s no one thing we can point to that is Ontario,” he said.