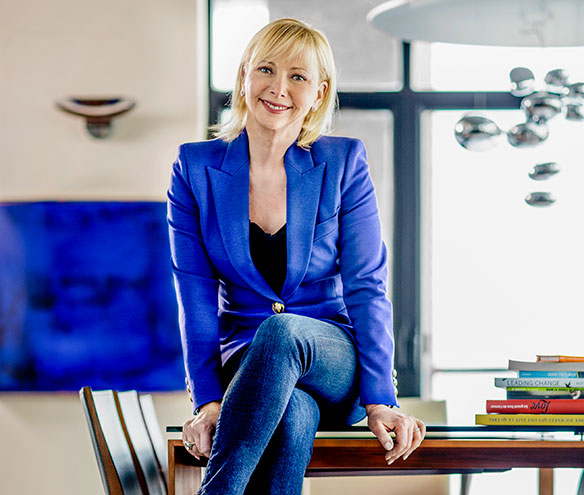 They’re movers and shakers. Their contributions have changed and continue to change the nature of travel, both in Canada and around the world. In this week’s issue, Canadian Travel Press’ series of profiles on Women in Travel continues with Christiane Germain, the co-president and co-founder of Group Germain Hotels.

When Christiane Germain and her brother Jean-Yves first approached their father with the idea of turning one of his renovation projects into a hotel, his initial answer was actually no.
“We ended up being able to convince him a few months later,” Germain, the co-president and co-founder of Group Germain Hotels, tells Canadian Travel Press. “I was excited. It’s one of these things where when you’re in your 20s, you kind of go for it. Not being a success was not an option. It actually quite rapidly became pretty busy.”
What started with one hotel in 1988, the Hôtel Germain-des-Prés – the first boutique hotel in Canada, which was converted to the Alt Hotel Quebec in 2008 – is now part of a Canadian success story, with Group Germain Hotels on track to own and operate 20 Le Germain Hotels and Alt Hotels across the country by 2020.

Accidentally on purpose
At a bit of a crossroads in her career after several successful years developing restaurant concepts and managing establishments, Germain recalls the fateful trip to New York City in the ‘80s that sparked the idea for the inevitable hotel empire.
“It was a moment in my life where I didn’t know much about what my future was going to be,” she says. “We went to New York to look at things that were kind of trending at the moment, and by accident, we stayed at this hotel, the Morgans. I was with my brother, and kind of fell in love with it. My brother likes building things so he was looking at it and went ‘well, it wouldn’t be too difficult to build something like this.’ So that’s how it started.”
While she stems from an entrepreneurial family and the business remains a family-owned operation, Germain says she didn’t grow up with the intention of being part of the Germain enterprise.
“As a matter of fact, my first jobs were working for other people. It was not working in the company, and going back to 40 years ago, my father had a company, he was doing well, I was working with him, but this thing of taking over your family business was not as much something you talked about,” she says. “I worked for other people. I was very independent. I wanted to do my own thing, and I wanted to show everyone that I was able to manage my life, didn’t need anybody, I was that kind of a young person.”
However, she credits her parents as being the most important mentors in her life.
“They’ve introduced me to the world of business. My father was a great business person. Very fair, very close to his people, he always re-invested in his businesses, he set a very high example,” she says. “My mother was the one who would say to us if you have success in life you have to make sure you keep your two feet on the ground. I mean basic things like that, that you realize later on are very important.” 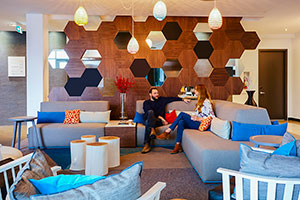 Checking in
Describing her role in the company as ensuring people work well together and enjoy working together, Germain says what she likes about her job is that everyday brings something new.
“One of the reasons I really like my job, and after all these years I’m still excited to come to work, is doing what I do is always different,” she says. “Being involved in many aspects of the hotel, whether it’s being involved with the HR department, the design department, marketing, I mean things are changing so much. It’s never boring.”
For anyone thinking of getting into the industry or launching their own company, she says it’s important to allow yourself to make mistakes.
“That’s good for men or women, but women have a tendency to want everything to be perfect, and sometimes you have to let go because it cannot be perfect all the time, and you have to allow yourself to make mistakes,” she says. “And a mistake when it does happen, I wouldn’t say it’s a failure, but at the same time you learn a lot from that. So allow yourself, go for it, and if it doesn’t work, then it could easily work the next time.”
To this day, she says she still gets excited to open new properties. Some of the most recent developments include the opening of the Alt Hotel St. John’s and the soon-to-open Le Germain Hotel Ottawa.
“It’s very competitive,” she says of the hotel industry. “We’re small, and the fact that we’re small, it gives us a certain agility. It’s easy to react fast, and as a company we’re very close to our people, our employees, and also very close to our guests. I guess because my brother and I were the co-founders and we’re still running the company, we’re very hands on in a certain way. I think in a world where there are giants in everything, you also have the counterbalance, which is small organizations.”
Beyond her day job, Germain can also be found on the TV show Dans l’oeil du dragon, which is the Quebec adaptation of Dragon’s Den.
“That’s a way for me to mentor a couple of young companies that I choose to invest in,” she says. “It’s a way for me to mentor and take more initiative in a few people.”

Looking back and to the future
Looking back on the past 30 years in the hotel industry, Germain counts the opening of their first hotel, as well as opening their first hotel outside of Quebec City as some of the biggest moments to remember.
“Our businesses had always been in Quebec City, and to move out of Quebec City, and to do something elsewhere was significant, a very significant move,” she says. “That was in 1999. Because a lot of people were saying you’re doing well, but you’re doing well because you’re in Quebec City, wait until you move out of Quebec City, it won’t be so easy. And I mean it wasn’t easy, but it turned out to work pretty well.”
From dealing with fires to developing a hotel in Toronto during the SARS epidemic, she says the road also had many challenges along the way.
“To open a hotel in a time when the World Health Organization said don’t go to Toronto because you may die, and you open a hotel, it was a tough, very tough time for us. It wasn’t supposed to be like that,” she recalls. “But that’s part of building a company. It’s not always easy. One thing that my brother and I were very fortunate about is that we don’t panic easily. I say that because sometimes the same thing wouldn’t have happened to other people and, if you panic, you’re in trouble.”
Rather than running from problems, she says they figure out ways to solve them.
“When the SARS thing happened, it was not good, but there was nothing we could do except do our best and make the most of it,” she says. “So it slowed down the project in the sense that we didn’t do the numbers that we were supposed to do, we didn’t have enough money to pay our debt and we had to talk to people to support us, it was difficult but we made it.”
While Group Germain Hotels is in a good place, she says she never takes success for granted.
“We’re doing well and we have a great team of people with us, things are very good, but even now you don’t know what’s going to happen,” she says. “I’ve never looked too many years ahead of me, you know. Especially where I’m at in my life, I don’t look too many years ahead of me. It’s scary. We still have projects, there’s still things [we want to do], now by the end of 2020 we’re going to have 20 hotels across this country. And you know, I think we’ll be able to go somewhere else after that.”
And while the industry is ever-changing especially with technology, she believes people will remain at the core of the company’s success.
“We have to keep our eyes open and adapt,” she says. “I still think that people are going to have a very important role to play in the future. People are very much looking for experiences. When they travel, they want a nice experience. And the human to human contact is still going to be important. Technology is going to help us, making sure that this human touch is even better than it is today. Things are changing, that’s the reality of what we’re going through right now.” 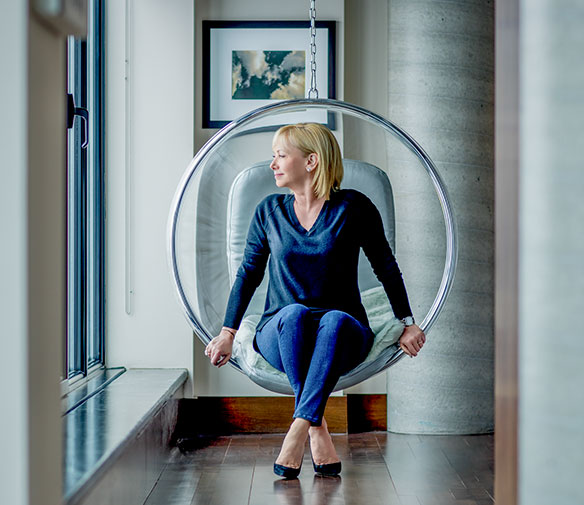