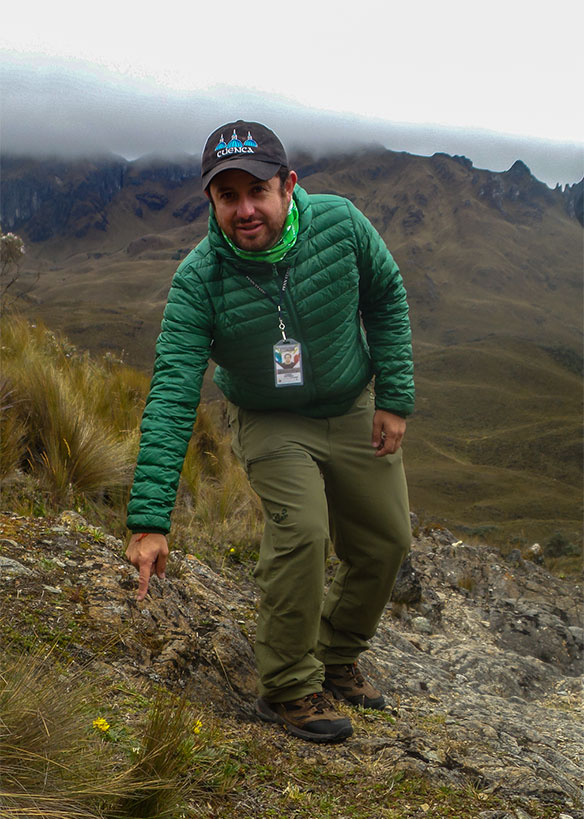 (Photo above: Guide Sebastian Cardenas points to a flower found in a lofty alpine setting in Ecuador’s Cajas National Park.)

Does Ecuador’s Cajas National Park serve as a natural medicine cabinet of sorts?
Sebastian Cardenas says that may well be the case.
Tourism guide Cardenas says the park – found a short distance from the Andean city of Cuenca – is host to a number of plants that have medicinal uses, including bolarium, used to help people sleep.
And then there’s coca de pramo, which can provide energy, but which, despite its name, isn’t related to the infamous coca leaves found in the Andes that are used in the production of cocaine.
And, continues Cardenas, some Asians have been looking into the feasibility of producing coffee from manure produced by some of the park’s resident alpacas and llamas, something Cuenca-native Cardenas labels “kind of weird.”
Mountainous, often stark Cajas is home to a number of other curiosities, says Cardenas, adding that park visitors can find flowers at over 4,000 metres, an unusual occurrence.
As well, the park is home to two endemic hummingbirds.
Among trees are ones called paper trees because their bark is seen as similar to paper.
“This is totally different than the rest of the country,” Cardenas says.
Park visitors will find numerous trails clearly marked according to their difficulty, and can explore landscapes home to the likes of llamas, alpacas and pumas.
Clouds are common in the region and Cardenas cautions visitors to always use sunscreen as the park’s lofty altitude and its equatorial location leads to a powerful sun.
Canadian tourists are welcome to hoof it through Cajas, even though some earlier Canadian arrivals are now considered a nuisance by park authorities. Pine trees, imported from Canada long ago because of their lumber qualities and which are now found in large numbers in park boundaries, are seen as being disruptive to native vegetation.
As well, trout that was also brought from this country in the past has gained a firm foothold in park lakes, and now feeds on endemic food sources and so is viewed as an invasive species, prompting park authorities to invite locals to fish for the trout in hopes of ridding lakes of their unwelcome guests.
Panama’s Copa Airlines includes Montreal, Toronto and Quito in its network.