A mix of history and culture that Canadians love 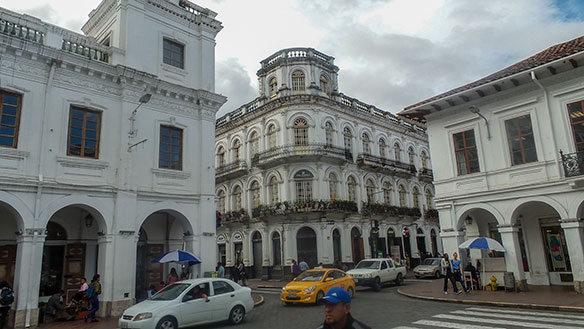 (Photo above: Cuenca’s old quarter is a proud showcase for the city’s historical side.)

Sebastian Cardenas cites the number of Canadians living in his interior Ecuadorean city as proof it deserves to be on Canadian tourism itineraries.
Cuenca is home to a large number of Canadian and American expatriates, many of whom believe that the city’s pleasant climate makes it an attractive place to retire.
But the city is also a great place to visit for those Canadians who plan to return to their homeland, Cardenas continues, noting its old quarter has UNESCO World Heritage Site status, which was awarded after UNESCO officials carefully inspected the district.
“The architecture is a mixture of German, Spanish, French, Moorish, and modern,” Cardenas says of Cuenca, adding the UNESCO team “checked every single house in the old quarter” before giving the coveted World Heritage Site status to that district. The district is aligned along what Cardenas labels a “perfect chessboard”-like square pattern and hasn’t changed much over the years.
Some of the old quarter’s churches were built in part with stones taken from Inca structures.
Cuenca architecture also bears many similarities with the architecture in its Spanish namesake, leading some travellers to confuse the cities, Cardenas says.
Despite its many old structures, Cardenas cautions people against simply labelling it a throwback to the past.
“You cannot consider Cuenca an old city because it’s also modern,” he says. “You can find a disco area five minutes from art galleries and museums.
“Cuenca has a nice mixture of history and culture, but there are also modern features. There’s always something going on in Cuenca.”
Cardenas adds that it’s easy to walk around a city that’s also proudly kept clean by local officials and residents.
Among airlines serving the Ecuadorean capital of Quito is Panamanian carrier Copa Airlines, which also includes Montreal and Toronto in its network.