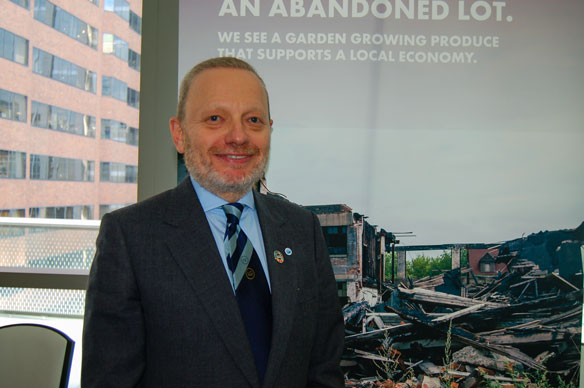 A growing priority for the tourism industry to help solve the climate change crisis largely drove the agenda at the recent Ensemble Travel Group international conference in Seattle.

An overall conference theme of “Travel With Purpose” directed the opening keynote comments by Ensemble CEO David Harris, who said that “we’re all aware that climate and sustainability are fast becoming the biggest issues across the globe.

Harris confirmed that travelling with purpose is an approach to travel that is being prioritized by the group. “While we can’t solve every problem, our business impacts environmental and social sustainability … and we have a responsibility to be mindful of that.” 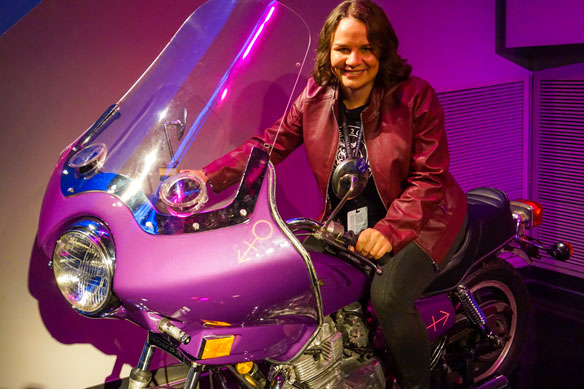 The motorcycle ridden by Prince in Purple Rain is available for photo shoots at the Museum of Pop Culture (MoPOP) in Seattle, which served as the final night venue for this year’s Ensemble International Conference. Anne Gibbons, a travel consultant for TravelOnly in Brantford, ON, tried the bike on for size.

About 900 conference attendees, including Ensemble member travel advisors and product suppliers, came to the event. Ensemble Group retailers from Canada, Australia, New Zealand and the United States gathered at the Hyatt Regency Seattle for the four-day event, during which member agents engaged in numerous training sessions. 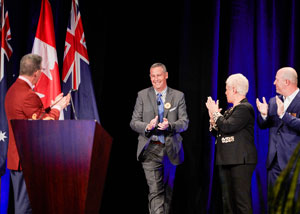 During the conference, the CEO encouraged delegates to participate in tourism measures to mitigate climate change and take a leadership role in that journey. “If not, we will face the consequences of failure,” said Harris in an interview with Canadian Travel Press.

He said the climate change mission by the tourism industry will require support at all levels of the executive leadership chain, especially by tourism product suppliers. And it will essentially need to portray certain practices as socially unacceptable, in the same way that smoking or drinking/driving have become. 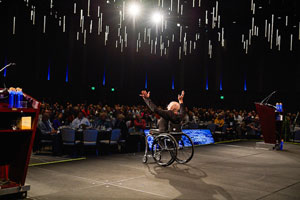 Wheelchair-bound Spencer West held the attention of delegates at the Ensemble conference with his motivational speech.

“I’m pleased at the degree to which suppliers have got on board and committed to solving climate change with many different measures,” said Harris. He paid tribute to those tourism sustainability leaders, including The Travel Corporation and its TreadRight Foundation.

On hand from The Travel Corporation was company CEO Brett Tollman, whose presentation starkly illustrated the challenges presented by climate change. And he said that only five to 10% of travellers were currently engaged in some sort of sustainable travel, or were making requests to include sustainable products/programs in their travel itineraries.

The TreadRight Foundation is taking steps to meet these challenges, by encouraging more sustainable modes of travel and tourism. It operates over 50 sustainability projects around the globe, falling under the three pillars of People, Wildlife and Planet. Support is provided through donations and grants to leading partners across the sustainable travel spectrum.

Tollman also mentioned the “Greta effect,” a reference to the campaign against commercial jet air travel undertaken by climate activist Greta Thunberg of Norway, who has given rise to “flight shaming.”

“Our industry has to address this,” said Tollman, suggesting that air travel “has to be more balanced.” An example of that is the initiative by KLM to encourage travellers not to use jet travel for short-distance trips, instead advocating land transport by train, or replacing face-to-face meetings with more video calls.

During the conference, Ensemble announced that it has just signed partnership agreements with two environmental action organizations, giving member agents the tools to take up the fight against climate change. They will be able to apply these mechanisms to holiday flights and travel itineraries for clients who want to play a part in solving the climate crisis. Ensemble is regarded as the first consortia in the travel industry to establish such partnerships. 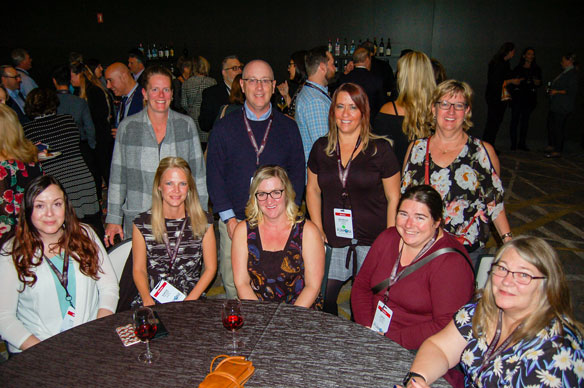 “Carbon emissions from travel are only increasing – with air travel alone projected to generate one billion tonnes in 2020 – so it’s crucial for the industry to take steps to reduce carbon pollution,” said Cool Effect director of marketing, Jodi Manning. Cool Effect oversees 15 projects around the world that are dedicated to the reduction of carbon greenhouse gas emissions, while also benefitting local communities.

Joining Cool Effect is the Purdue Tourism Research Center, which will deploy its Travel Care Code, as part of its work with Ensemble to conduct socially responsible travel, while also tackling climate change. It will advise Ensemble travel retailers on 10 actions for their travelling clients, at travelcarecode.org. For instance, “support the locals” can include patronizing local restaurants and street food, visiting farmers markets or buying locally produced souvenirs.

“In addition, we’ll share tips on how agencies can get started in sustainability, and how they can take it to the next level,” said Jonathan Day, director of the Travel Care Code. “We’ll also provide marketing tips on how to communicate these ideas with clients in the most effective ways.”

The Business Of Travel

While being steeped in the relatively new science of tourism sustainability, Ensemble advisors were also being schooled at numerous training sessions that took place at meeting rooms on the conference floors of the Hyatt. These ranged from supplier training sessions by Ensemble’s supplier partners to learning labs that focused on everything from specific portal tools to the power of emotional intelligence. 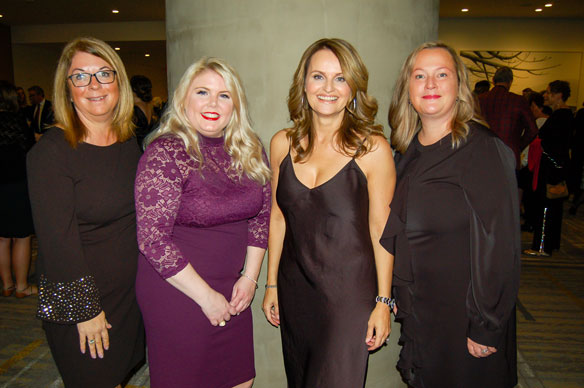 Ensemble travel advisors and supplier partners attended the cocktail reception preceding the Circle of Excellence awards gala dinner at the conference. Amongst them were executive staff from Travel Best Bets in Burnaby, BC, including (l-r) Tracy Collinge, manager of home-based agents; Kyla Dobson, director of finance; Claire Newell, the owner and president of Travel Best Bets; and Shauna Vu, the company general manager.

Before starting that schedule of sessions, agents heard that Ensemble had posted its best year in company history in 2018, after more than 50 years in business. This year, preferred supplier sales from members will eclipse $1.4 billion, which represents an 8% year-over-year growth, said David Harris.

Ensemble CEO Harris also reviewed new and prominent trends in travel retailing that have potential relevance for member advisors. For instance, he pointed to “affinity travel” as a trend worth watching for sales opportunities.

“The closer people feel to an organization or a publication, the more likely they are to trust them for things like planning a vacation,” he said. “Groups like Armed Forces Travel, New York Times Journeys, Equinox Explore, Royal Canadian Geographic have been successful … even ancestry travel has become a trend as groups are monetizing their memberships and special interests.”

Ensemble travel advisors contacted by Canadian Travel Press said they were generally impressed with all aspects of the conference.

“Attending the Ensemble Conference is an efficient use of our time because we are able to connect one-on-one with the senior executives of most major travel suppliers, plus meet with new suppliers to uncover new offerings for our clients and also connect with fellow agency owners to discuss improvements in efficiencies, marketing and customer service,” said Claire Newell, owner/president of Travel Best Bets in Burnaby, BC She took advantage of her proximity to Seattle to send more advisors than would normally be the case, with four senior managers attending instead of the usual two. 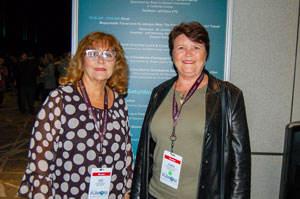 Two of the travel advisors in attendance at the Ensemble Travel Group international conference in Seattle were (l) Edy Arruda, a travel consultant for da Cunha Voyages in Mississauga, and Maria da Cunha, the principal for the agency.

That allowed the team to cover more sessions and ultimately bring more knowledge back to the business, as each went to different classes and speaker sessions. Several of the courses, including the future of travel, legal aspects of digital media, using your database and how to motivate your team, were all worth attending, said Newell.

The sustainable tourism theme of the conference has encouraged the company to create a list for delivery to customers on ways that they can travel more sustainably. “I was also very impressed and encouraged by the initiatives that many large travel suppliers are taking,” said Newell.

“The most beneficial aspect is the educational program, where there is the opportunity to consider new offerings from suppliers that will enhance your business and provide better services to the client. Technology was also well represented at the conference.

“The other aspect is being able to meet with suppliers face to face and strengthen the relationships. I also found that the keynotes were excellent and provided an opportunity for self-reflection and self, growth. Overall, I found the conference to be a success.”