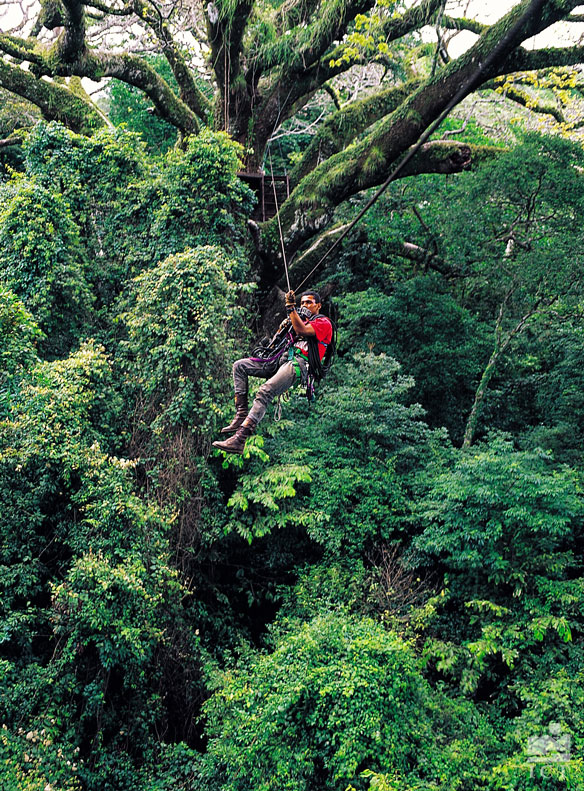 Costa Rica is the home of the zip-line.

A raft of rafting opportunities continues to await adventurous sorts planning to vacation in Costa Rica.

The country is seen as a pioneer in the ecotourism movement, but recent years have also seen the development of large oceanside resorts belonging to international hotel chains, properties many conservationists argue are incompatible with the concept of ecotourism.

But Costa Rican ecotourism veteran Rafael Gallo says those who worry that Costa Rica may be drifting away from its commitment to preserving nature needn’t be concerned, with the country strongly committed to protecting its green spaces.

“It’s a very unique place,” he says of a country that has set aside 25% of its land for national parks and has a further 15% protected by reserves. Tourism authorities state the country has over 5% of the world’s biodiversity.

Almost all the large all-inclusives are found in the northwestern Costa Rican region of Guanacaste, says Gallo.

The country is working to become entirely carbon neutral and has also banned hunting.

And Gallo – involved in Costa Rican tourism since 1985 and who’s currently honorary president of the International Rafting Federation and has rafted in such far-flung locales as Siberia, Chile and Zambia – says the adventure tourism trade is also thriving in his country, home of the likes of zip-lines, which have since appeared in many countries.

Costa Rican landscapes ensure that the country is suited for adventure activities, with Gallo believing that Costa Rica has “more rivers per square mile than any other place.”

That ensures that the country is suited for rafting, with rafting options ranging from the relaxing to the thrilling, he continues, adding rafters frequently spot wildlife on their journeys.

Gallo notes there are plenty of other adventure activities – such as canyoneering, mountain biking, snorkelling and diving – available in a country home to such landscapes as rainforest, mountains, mangroves, oceans and volcanoes. Fourteen of the volcanoes are active.

Ecolodges are found throughout Costa Rica and have evolved, often providing stays that Gallo says offer a “nice bed, wine and great food.”

Gallo is convinced that there will always be tourists eager to explore Costa Rican rainforest that provides a home for the likes of jaguars, monkeys, sloths, toucans and parrots.

“I think people are learning that being in the rainforest is as cool as being on the beach,” he says. “You’re just not going to get a suntan.”