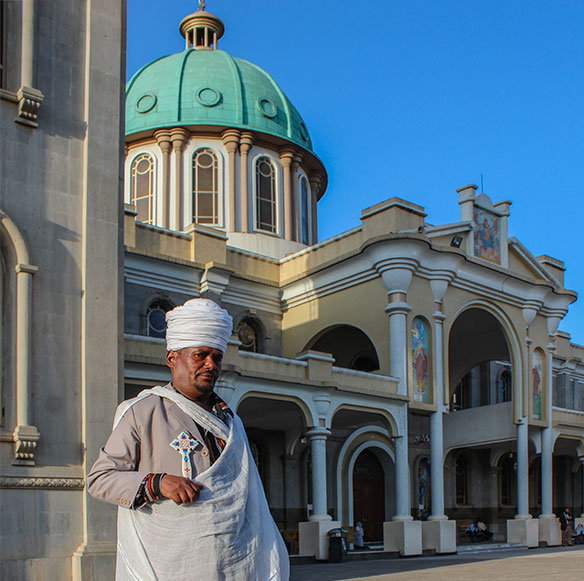 [Editor’s note: This week, Canadian Travel Press offers its readers the first of a special, two-part feature on Ethiopia by Chris Robinson and Dara Beard of The Chris Robinson Travel Show. In part one, Robinson takes readers on a journey of discovery and, along the way, reveals some of the wonders of Ethiopia.]

Why do we travel?

I have asked this question frequently over my years in the travel industry. The most frequent response is “to see and experience somewhere different.” In our increasingly homogeneous world, this has become more and more challenging. So, when I recently arrived in Addis Ababa and was met by Welde, my Ethiopian Tourism Guide, his response to my first question was promising. It was a promise that Ethiopia unequivocally delivered over the next two weeks.
I had simply asked the local time. But as Welde explained, Ethiopia has two times. World time and its own Ethiopian time – which officially starts at daybreak, so 7 a.m. becomes 1 a.m. It continues: the country has 13 months and, as it neglected to change with the rest of the world to the Gregorian calendar in the 16th century, it’s generally seven to eight years behind the rest of us.
Feeling eight years younger, I explored Addis Ababa, capital of Ethiopia and a teeming, brash, colourful city of four million people. It’s a wonderful collage of the 80 peoples and languages that comprise this strange but wonderful country. Addis is well worth a couple of days at the start of a trip to ease you into the Ethiopian vibe. The markets are its heartbeat, the music is compelling, and the churches are inspirational. Yes, this is a predominantly Christian country, but with its own very different version: Ethiopian Orthodox. 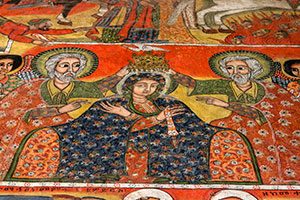 Visitors are welcomed to experience what appears to be a beguiling mix of Islam, Judaism and Christianity. Ethiopia was the second country in the world to adopt Christianity, and it most accurately reflects what the original faith looked like in the early centuries AD.
Our journey around Ethiopia showcased just how unique this destination truly is. A short flight took us to Bahir Dar on Lake Tana in central Ethiopia. This is the source of the Nile, much sought after by Victorian explorers. Centuries before their quest, this region was the heart of a flowering monastic culture. We took a boat trip to visit the circular Ura Kidane Mihret Monastery, at the end of a forest trail enlivened by screaming monkeys. Vibrant frescoes tell the Christian story around the inner sanctum which, like all Ethiopian churches, holds a replica of the Ark of the Covenant. Afterwards, we drank firewater with the local headman of the village before going hippo-watching on our return voyage. 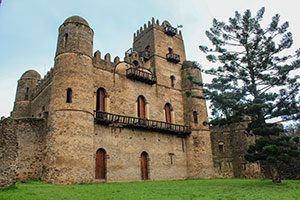 Driving northwards through increasingly mountainous scenery, we arrived at Gondar. Here, a medieval dynasty of Christian kings played an immense game of one-upmanship, as each succeeding monarch built a bigger castle than his predecessor. The end result is a weird and wonderful Camelot in the heart of Africa. It was the first of five UNESCO World Heritage Sites we were to see in Ethiopia.

The second UNESCO Site was a further scenic drive north: the Simien Mountains. The scale of this great mountainous plateau, riven by deeply incised valleys, is the equal of the Grand Canyon. Rising to over 4,500 metres, it’s a highland island with its own unique ecosystem of endemic plants, birds and animals. From Africa’s highest lodge at 3,260 metres, we trekked with a local guide to the edge of an immense abyss at the tree line, where we encountered a sprawling troop of endemic Gelada Baboons. To crouch in the long grass, while the family life of these ground-dwelling social primates flowed all around us, was simply magical. 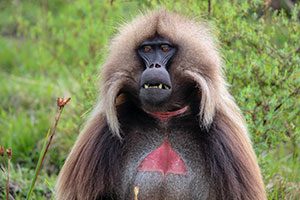 In the far north is Axum, the city associated with the Queen of Sheba and the centre of an Empire that rivalled Rome itself. Some of the world’s greatest obelisks now stand to celebrate the ancient rulers of this land, many with eerie subterranean tombs. The local people believe that the actual Ark of the Covenant was taken from Jerusalem to Axum, to be safeguarded to this very day.
A short flight southeast lies the most astonishing site in this astonishing country: Lalibela. No pre-trip research can prepare the visitor for this spectacle. In the 13th century, when Islam had conquered the Holy Land, King Lalibela decided to recreate Jerusalem’s pilgrimage site on top of a bare mountain – by building beautiful churches downwards into the very mountain itself. Over time, eleven great places of worship were hewn into the rock to create an unbelievable religious complex that has been a constant centre of pilgrimage for centuries. It is like nowhere else on earth and ranks with the most renowned man-made creations anywhere on our planet.
From the north to the south, a whole new face of Ethiopia is revealed. Flying via Addis Ababa to Arba Minch, we entered the world of Africa’s Great Rift Valley which extends north from Kenya right through Ethiopia. This is a world of crocodile and hippo infested rift lakes, vast savannah vistas and, most marvellous of all, peoples whose way of life remains remarkably unchanged. We spent time with the Dorze people on the rift walls who are successfully finessing their beehive hut village life with a weaving craft industry that intersects with the modern world. More isolated are the Konso people, who live in hilltop stone settlements with concentric walls like a maze; their ancient systems of village laws remain intact. 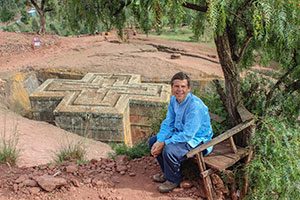 The culture shock of returning to 21st century Addis Ababa was jarring and instructive. This is a country of absolute contrasts. People, landscapes, wildlife are incredibly varying and yes… different. Different within Ethiopia and very different to anywhere else in the world. But that’s exactly why we travel and why Ethiopia stands on the cusp of becoming the next big travel destination – because “it’s different here.”
[Chris Robinson travelled on an international media trip organized by Ethiopian Tourism. Direct flights from Toronto to Addis Ababa and internal flights within the country were with Ethiopian Airlines. The carrier operates five direct flights from Toronto to Addis Ababa on Dreamliner 787-900 XWB aircraft. He recorded a Travel Show radio broadcast of his experiences which is available on a podcast: www.chrisrobinsontravelshow.ca/RadioShows/PodcastPastShows.aspx?ID=220 .] 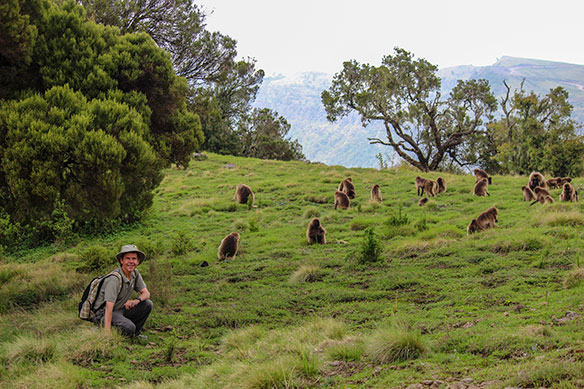