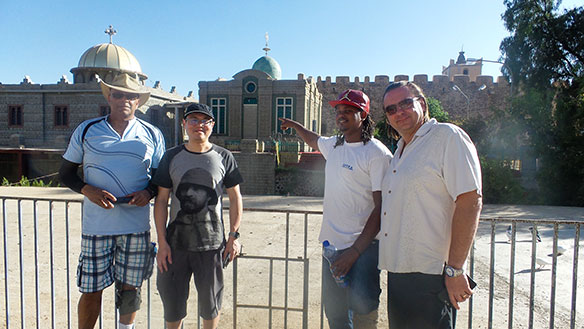 (Photo above: The Ethiopian city of Axum is home to a structure Ethiopians believe contains the Ark of the Covenant.)

The carrier has five-times-a-week Toronto service, and passengers can choose between economy and business class service, with the latter called Cloud 9.

Female flight attendants are dressed in traditional Ethiopian dresses throughout the planes.

Ethiopian Airlines has been linking Toronto and Addis Ababa for over six years, offering non-stop east-bound flights and a westward routing that has brief stops in Ireland.

The carrier is also considering a Montreal route, with Abate stating that, “We strongly believe that Quebec should have a direct link to sub-Saharan Africa.”

The Star Alliance carrier has a network that reaches points throughout Ethiopia and most of the rest of Africa as well, and the Middle East and Asia, with the Asian network including Kuala Lumpur, Singapore, Bangkok and cities in India and China.

Abate notes that his airline now has an “enhanced” mobile app that “is giving users a lot of flexibility.” Those app users can book, check in, track their flights and do other things through it.

“It gives a very convenient experience to our passengers,” he says of an app that’s compatible with the “Android and Apple families. Everybody can download it and follow it.”

Ethiopia has an ambitious tourism development program that it hopes will see the number of tourists visiting the Central African nation rise from the current million a year to 10 million by the year 2030. Abate notes that National Geographic last year labelled Ethiopia a top tourist destination, and Abate says his homeland’s attractions are both natural and cultural. Among tourism centers is Lalibela, known for its ancient underground churches beautifully carved from rock, while Axum has obelisks that date back thousands of years. Axum is reputed to house the Ark of the Covenant, kept in a structure which has a carekeeper who never leaves and which visitors can’t enter.

A museum in Addis Ababa displays the remains of Lucy, the oldest human remains found anywhere.

The country’s prime minister has now opened part of his palace to tourists, enabling visitors to enter a structure that has housed Haile Selassie and other Ethiopian leaders.

But Abate adds that his country will appeal to nature enthusiasts as well, with one area of the country having black-maned lions, the only lions with that coloration.
Those who will be travelling beyond Addis Ababa with Ethiopian Airlines and have an eight-hour or longer stay in the capital can have a tour of the city and a hotel stay provided by the carrier.

Among tour operators offering Ethiopia is Goway, with company president Bruce Hodge labelling it “an exciting destination which real Globetrotters will want to visit. Its history is amazing – from its place as the cradle of civilization to the Biblical times of the Queen of Sheba and the Ark of the Covenant, to the influence of Haile Selassie.” Hodge notes that one of the world’s first countries to adopt Christianity “has some of the continent’s highest mountains, an amazing thermal area and is a significant connection for the Nile River.”

Meanwhile, Hodge says he has “always been impressed by Ethiopian Airlines – it really is the best in Africa, as well as having the largest network.”