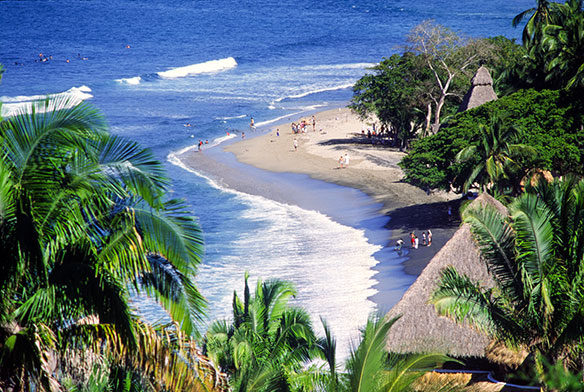 (Photo above: Sayulita has built a following with surfers.)

Mexico’s Riviera Nayarit views itself as a crossroads between resorts that are often at the upscale end of the lodging spectrum and Mother Nature.

Richard Zarkin, spokesman for the Riviera Nayarit Convention & Visitors Bureau, says numerous upscale hotel companies – such as St. Regis and Four Seasons – decided upon a Riviera Nayarit presence, and that presence is a fitting one.

Tourism authorities on the Pacific Coast destination are happy to “promote it as a luxury destination surrounded by Mother Nature,” he said during Mexico’s annual tourism show of Tianguis.
Birdwatching in a part of the world that has a large number of bird species is among important niche markets, he told his Acapulco audience.

However, Zarkin said his destination – a newer entrant among major Mexican destinations seeking foreign tourists – at times has to work to “get out of the shadow” of bordering and long-established Puerto Vallarta.

Tourism authorities also praise the culinary scene in Riviera Nayarit, with those attending its Acapulco event served dishes created by Riviera Nayarit celebrity chef Betty Vazquez.
Meanwhile, Carlos Eguiarte, the sales and promotion coordinator for the convention and visitors bureau, noted next year will see the opening of a One&Only hotel in the Riviera Nayarit.

The “very small, very exclusive” hotel will be one of only two One&Only hotels in all Mexico, with the other being in Los Cabos.

“We’re very excited,” said Eguiarte, adding the impending arrival of the company will “increase the luxury product in the Riviera Nayarit.”

The destination will be gaining other hotels, with, for instance, a Fairmont opening in 2020, Eguiarte pointed out.

Other upcoming openings include an Iberostar in 2021.

“We have all the categories [for different budgets],” Eguiarte stated.