Ethiopian city believed to be home to long-lost ark 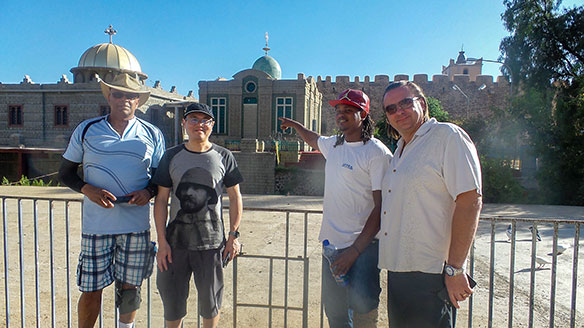 (Photo above: Standing before the Chapel of the Tablet during an Ethiopian Airlines fam trip are Veejay Singh, PanEx Travels & Tours; Harold Ho of Royal Scenic; a local tour guide; and Ed Radonic of RadonicRodgersStrategy, which promotes Ethiopian Airlines in this country.)

Does a smallish sanctuary in the Ethiopian city of Axum hold the answer to one of religion’s great enduring mysteries?
Ethiopians certainly believe that’s the case.
Ethiopians are convinced that Our Lady Mary of Zion Church’s Chapel of the Tablet is home to the Ark of the Covenant, which when in Jerusalem housed The Ten Commandments and which vanished from public sight thousands of years ago, leaving scholars divided over where it ended up.
Those in predominantly Christian Ethiopia say there’s no doubt that the Biblical icon is in their homeland, with Our Lady Mary of Zion Church’s chapel being its permanent home. Lore has it that the ark ended up in Ethiopia after the son of King Solomon and the Queen of Sheba – who Ethiopians state visited Solomon in Israel, but returned
to Axum, from where she ruled – visited Jerusalem.

It’s here
“The Ark of the Covenant is here in Ethiopia,” tour guide Ayinekulu Mulugeta flatly states.
The guide adds there’s absolutely no doubt in his mind that Our Lady Mary of Zion Church – first believed to have been built as early as the 4th century A.D. and then rebuilt twice after being destroyed – is its home.
The chapel itself is visible to those exploring the area, but no one other than a monk who carries the title of keeper of the ark is allowed to enter a structure that is gated off. Food is left outside the gate for the keeper, providing an elderly individual who hasn’t left the church grounds in decades – even for medical care – with the necessities of life.
When the keeper dies, another monk will replace him and then be the only person able to enter the chapel.

No photos allowed
Visitors may occasionally view the keeper of the ark through the gate, but are warned by guides not to take pictures of the somewhat reclusive figure, who may extend a cross through the gate, enabling the faithful to kiss it.
A leaking roof several years ago lead to speculation that the ark would be relocated, perhaps leading to public sightings of a religious icon that was the source of Indiana Jones’ quest in Raiders of the Lost Ark.
Christianity became Ethiopia’s official religion in the 4th century, making the African nation one of the world’s older Christian communities.
“There are over 65,000 Orthodox churches in Ethiopia. Each church has its own copy of the Ark of the Covenant,” Chanyalew Gebremedhin reports.
Ethiopian Airlines has non-stop Toronto-Addis Ababa service. More information can be found at www.ethiopianairlines.ca .