The Travel Agent Next Door’s model for success 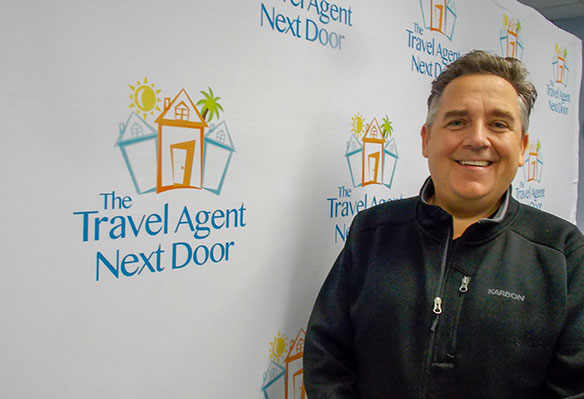 In the first of a two-part series on The Travel Agent Next Door, CTP sits down with its founder, Flemming Friisdahl for a conversation about the group’s remarkable success.

A headline on a June 2017 Forbes article – “Why Win-Win-Win propositions are the future of business” – made me wonder whether or not Flemming Friisdahl could predict the future?
You see, four years earlier – as he was gearing up for the launch of The Travel Agent Next Door (TTAND) – Friisdahl told me much the same thing.
“This is a partnership between the travel agent, the supplier and the Travel Agent Next Door. It has to be cemented together that way and that’s a very, very different approach, and I think that’s why the suppliers have been extremely supportive of this,” he stated in March 2014.
Simply put, TTAND was all about Win. Win. Win.
Now fast forward to 2018, when the home-based agency group’s founder sat down with Canadian Travel Press and observed: “For me, the [TTAND] model was very much built on something that I call the three W’s. The backbone of it is if it’s not a win for the travel agent; if it’s not a win for the supplier; and if it’s not a win for The Travel Agent Next Door (TTAND) – then we just walk away from it.”
Once again, Win. Win. Win. Clearly, it’s a strategy that’s working for TTAND.
With Friisdahl telling CTP: “You know, knock on wood, we’ve been somewhat successful. We finished last year at over $80 million in sales [and] we have a lot more suppliers coming and knocking on our doors. We have people that offer us money to make them an approved or preferred supplier, and we say ‘No, thank you.’ And it’s because it’s not a win for our other suppliers. And if it’s not a win for our other supplier partners, then eventually, they’re going to walk away, and we’ll end up being like every other host agency.”

Asking the obvious
So does that mean TTAND prefers to lead, rather than follow? It’s a question that elicited a hearty laugh from Friisdahl, before he responded: “I’ve decided to stay true to the 3 W’s.”
But he readily admitted that saying “no,” is not easy, particularly “when someone is standing there with a sizeable amount of money and us saying ‘No, thank you.’ [But we have to do it] because it takes away from our agents, and it takes away from the other suppliers. It might be a win for TTAND in the short term, but it isn’t a win.”
That approach also applies to TTAND’s agents, with Friisdahl confiding that: “One of the things we say in a good way is that we’ve agreed with around 96 of our primary agents over the last three years – because all of our contracts are one year – that renewing with Travel Agent Next Door is not the best thing – for them or for us [TTAND].”
“They’re great people,” he continued, “but we’re not about having the most travel agents. We’re about being able to service the travel agents we have to the best of our ability. So we will never be Canada’s largest home-based agent [group] based on travel consultants, but we will be – and I believe we are – Canada’s largest, based on sales per agent.”

Staying focused
In fact, by taking that approach, TTAND’s founder admitted: “We lost sales when those (96) agents didn’t renew or we didn’t renew (with them), but it was for the better because they were taking away from the focus of other agents.”
He explained: “We’re not talking about agents having to sell $1 million or half a million dollars or $250,000, but they have to sell at least around our minimum amount because, if not, unlike any other host agency, the $69 a month that an agent pays us [doesn’t cover what] we spend on services, marketing, tools, website, accounting systems, insurances, etc. If you add it altogether, it’s actually more than that $69 per month.”
He also made it clear that: “We don’t make money from the monthly fees. We make money when the agents sell. And this will sound odd, but that’s the right way to be, because if we make money when the agents sell, that means the suppliers are happy – that means it’s a win for them [the suppliers]; and if the agents are selling, that means it’s a win for them [the agents] and that means it’s going to be a win for us because everyone else is winning.”

What’s next for TTAND?
Well, said Friisdahl, “The number one thing that we look at doing is how do we make it easier for the agents. What can we do that allows them to either spend more time selling travel; or spend more time with their family, while making more money overall.”
To do that, TTAND agents can expect to see more technology, with Friisdahl pointing out that “we’re the only host agency in Canada that has nine booking engines for our agents to use on their websites – at no additional cost. And we’re the only ones that have Canadian content marketing.”
But bottom line, says TTAND’s founder, is that “all of the developments we do, we do to serve our agents and our business partners.”

So what’s the take-away?
“The one take-away is that I know for certain to be 100% true,” observed Friisdahl, “is that without the support of the suppliers and travel agents that knew very little about us, trusting in us – if that didn’t happen – we wouldn’t be here today, and we will never, ever, ever forget that.”
[Next week: Friisdahl talks about how it all started and just what makes The Travel Agent Next Door different.]

Taking it by the numbers

A little while ago, The Travel Agent Next Door released some research that it had commissioned from a Winnipeg-based consulting company that was designed to help it learn more about the home-based business overall.
TTAND founder, Flemming Friisdahl told CTP that the findings of the research “really reinforced what it was that we were thinking.”
He continued: “You know things like, 92% of the agents that moved from being in a storefront to going home-based are happier. Another interesting stat is that out of the 500 people that responded, 51.5% have only ever worked as home-based agents – so they never came from a storefront. So, if you were to ask me what was most surprising, that would have surprised me a little bit because I didn’t think it was that high. I thought more had come from storefronts.”

How long?
The research also looked at the average age of home-based agents, finding that 87.3% are 40 years of age or older; with 30% of those being 60 years of ages or older.
When questioned about money, Friisdahl said that 61% of those surveyed said they take home up to 30% more and 25% said they take home greater than a 30% increase.
As for how long those surveyed had been home-based agents, 46% had been doing it for five years or more,
while 23% had be at it for 10 years or more and 11% had been home-based for 15 years or more.
So what do home-based agents sell most? Well, Friisdahl noted some examples, with 63% of agents saying
that ITCs were what they sold the most; 17% said it was cruise; 9% said it was customized coach tours; 4% said it was weddings; and, somewhat surprising, 3% said business travel.
Overall, Friisdahl told CTP that: “90% of the agents said that they believe that they have a better work-life balance being at home. So, if you take those two things – they make more money and they’re happier, because they have a [better] work-life balance – those are pretty important things for doing the same things that you would do when you’re sitting in a storefront. It’s not like you’re doing something different.” 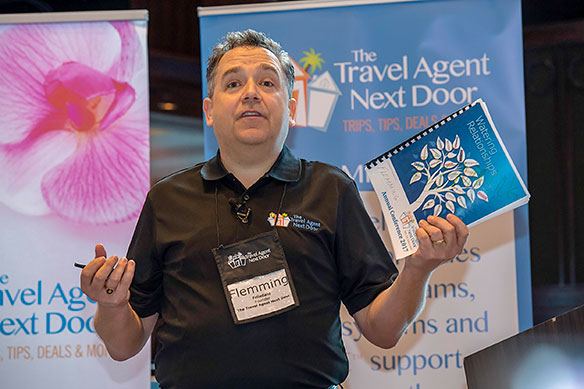