Family bonds on a cruising adventure

Two if by sea 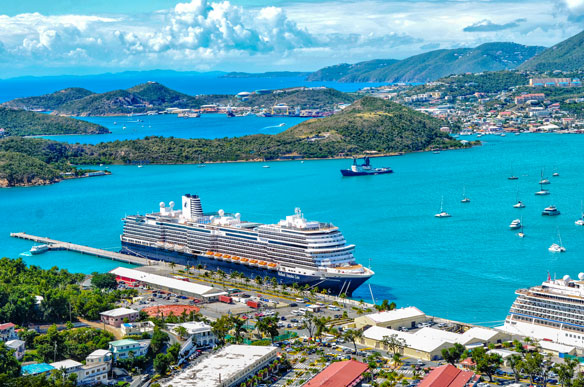 It felt like I was venturing into the great unknown as I pulled my carry-on towards the loading ramp of Holland America Line’s newest ship, Nieuw Statendam, with my aunt in tow in the port of San Juan, Puerto Rico. While she hasn’t travelled much since having twins 18 years ago and I frequently find myself on the road, this trip would mark new territory for me too, as my first cruise.

As we proceeded down the hallway towards our stateroom with keys in hand, my thoughts went from feeling fortunate to be able to share this experience with someone to a sense of panic about whether or not I had made a grave error by willingly sharing confined quarters with a family member for the better part of a week.

To my relief, that notion dissipated upon entering the well-appointed room, which had two beds and a massive veranda – double the length and width of most other verandas on the ship – as my aunt shouted “oh, my word!” with pure excitement. And, perhaps, partaking in the welcome bottle of Veuve Clicquot helped a little bit too.

Over the course of the six-day adventure, we’d come to grow closer exploring three new destinations, enjoying delicious meals and nightly entertainment, connecting with locals and fellow cruisers, and discovering there are lots of memories to be made both on and off the ship.

Set to join the cruise at the halfway point, we arrived in San Juan ahead of time to experience Puerto Rico’s capital before embarking on a voyage that would take us to the US Virgin Islands and The Bahamas.

Throughout Old San Juan preparations were underway for the San Sebastian Street Festival, a four-day party that draws in locals and visitors alike. Although we’d miss the festivities by a day, it meant we were able to explore the area without having to force our way through swarming crowds of pedestrians. 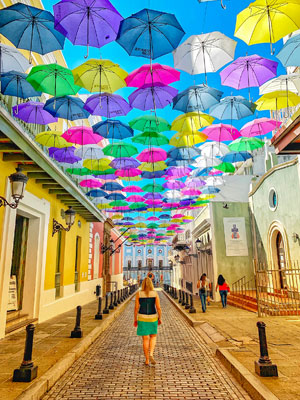 After taking in must-see attractions like El Morro Fort, we wandered through the picturesque and colourful streets, stopping to take many photos along the way. Eventually, we stumbled upon the street filled with colourful umbrellas, which has become a highly Instagrammed photo of Old San Juan. The installment pays tribute to everything that makes Puerto Rico a unique place and is supposed to spark a sense of exploration in the destination, which was hit hard by Hurricane Maria. Although there were very little traces left of the damages in Old San Juan, the scars were still apparent in the stories we heard from those who lived through the devastation.

“I saw a lot of hurricanes, but nothing like this,” noted the hotel attendant upon check-in. “When it was over I looked around and started to cry.”

“It was a very hard year,” a cab driver said a short while later, echoing his sentiments, adding that his family had no electricity for three months. “[Thankfully] tourism is really coming back now.”

Although we didn’t get a ticket, our visit happened to coincide with the San Juan run of the hit musical Hamilton, and we just missed crossing paths with Jimmy Fallon, who was on location shooting a segment for The Tonight Show, showcasing among many sights the very same street filled with umbrellas.

After enjoying our fair share of local cuisine like pastelillos (empanadas) and mofongo (a common dish made with fried plantains), the time had come to embark Nieuw Statendam. Upon arriving at the terminal, the entire boarding process took less than 15 minutes. As the port is very close to the heart of Old San Juan, we debated heading back for another stroll, but opted instead to get our bearings by doing a walk-through of the ship’s offerings. 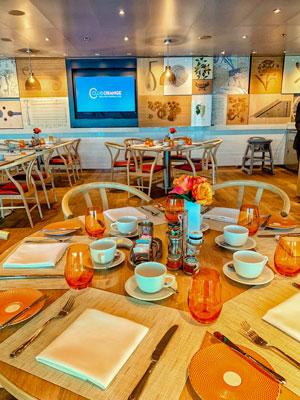 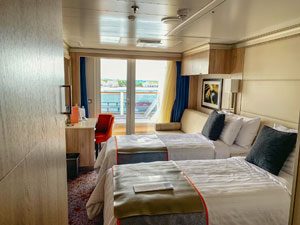 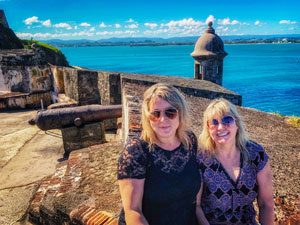 Ann and her aunt, Adelheid

It quickly became apparent that art is an important focus, with an impressive $4 million collection displayed throughout the ship. Many pieces have a music theme, ranging from an artistic shot of David Bowie to works made using cymbals. Overall there are works from 180 artists on board, curated by London-based Artlink and Norway’s YSA Design.

Another feature that catches my attention is a state-of-the-art gym and an outdoor running track, but alas, in the end, I never made it to either one.

After the tour, it’s time to lounge poolside and bask in the sun. Following dinner at the Lido Market, which has different stations serving up everything from hearty salad bowls to Asian fusion dishes, we head back to our veranda to witness the moment the ship leaves the harbour. Suddenly, there’s a knock on the door and a surprise delivery awaits. Joined by the addition of a plate of chocolate covered strawberries, we continue to admire the view. As the ship gently begins to move, it’s time for bed.

The next morning we woke up to views of many sailboats in the harbour of Charlotte Amalie on the Caribbean island of St. Thomas. Having gone to bed leaving Puerto Rico in the distance, it was a thrill to be greeted by a completely new scene. This must be why people enjoy cruising, we surmise, before heading off to the Lido Market for a breakfast buffet and some much-needed caffeine.

On the docket today: a shore excursion. After careful deliberation through pages of options for EXC Tours, we settled on the Panoramic Drive, Mountain Top & Aerial Skyride to Paradise Point tour, which promised scenic vantage points from around the island and even views of the nearby British Virgin Islands of Jost Van Dyke and Tortola.

Here, the hurricane damage was much more apparent, as hydro poles were still being resurrected along the drive and some debris remained scattered across the landscapes. At the popular Mountain Top overlook, a very important taste test was required in the name of research, as this is rumoured to be where the banana daiquiri originated. The final spot on the tour was an aerial sky ride to Paradise Point, which provided a great overview of the harbour and our ship in the distance.

This evening it was time to dine at Rudi’s Sel de Mer, a French-inspired seafood brasserie first launched on Koningsdam as Sel de Mer, named after master chef Rudi Sodamin. Presentation and service were top notch, and highlights included escargot (at the recommendation of the server), a chocolate dessert designed to look like a face, and a whole fish entree, which was expertly deboned tableside.

As the day would be one of leisure, we slept in prior to enjoying breakfast at the Club Orange restaurant. Exclusively for guests staying in Neptune and Pinnacle suites or those who add-on Club Orange perks for US$50 a day, this is a quieter alternative to eating in the Lido Market or the main dining room.

While taking part in trivia ranked high on the list of things to accomplish, somehow the entire day went by with more important activities like eating and working on our tan.

Fueled by a meal at the pan-Asian Tamarind restaurant, this evening we took in some entertainment along the ship’s Music Walk. First, more up my alley, there’s the Rolling Stone Rock Room, a new classic rock show developed in partnership with Rolling Stone magazine, featuring five musicians playing iconic hits by famous bands and rock stars like The White Stripes and Journey. Then it’s time to watch my aunt bust a move on the dance floor of B.B. King’s Blues Club, as an eight-piece band performed music inspired by the scene in Memphis and hits by the likes of Aretha Franklin.

This morning we awoke to shimmering turquoise waters overlooking Half Moon Cay, Holland America Line’s private island in The Bahamas. Tenders departed frequently to take guests from the ship to the shore.

There were many excursions to choose from like riding horses and going for bike rides, but we decided to make the most of the warm weather – we were escaping winter in Toronto and Ottawa, after all – and rotated between cooling off in the clear water to drying off in the sun and occasionally catching some shade under a clamshell rental. 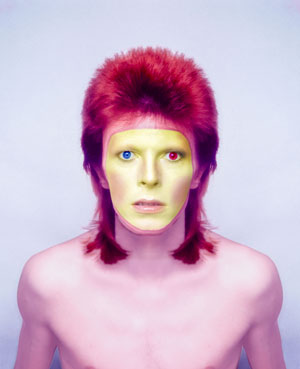 Famished from the exhausting day of lazing around and barely doing anything, we joined fellow travellers back on board to share some pizza, while others who will not be named (cough, me) also headed to Dive In, the onboard burger and hot dog joint, for a Nathan’s hot dog and cheese fries.

A short while later it was time for a farewell cocktail party ahead of dinner at Canaletto, an Italian restaurant offering fresh pasta and other favourites. As it was our last night, we mustered the energy to take in some entertainment at Billboard Onboard, where two musicians played piano and sang chart-topping hits often from audience requests, including a couple who asked for a romantic number to celebrate their five-year anniversary.

Since we had to get up bright and early, to-day we tested out the room service. Coffee was a welcomed sight after begrudgingly hitting the snooze button a few times after the alarm went off
at 5:00 a.m.

We enjoyed the last breakfast on the veranda, toasting to the experience over the past week, before bidding farewell to our newfound friends. Since we joined the cruise later on, we were required to be among the first guests to proceed through immigration, which conveniently meant we were also on the first transfer to Fort Lauderdale airport. As I parted ways with my aunt for our respective flights home, I knew this shared experience was something neither of us would soon forget. Did I regret bringing her along? No, in fact her presence added to my appreciation of my time at sea.

(Photo below: Half Moon Cay, Bahamas) 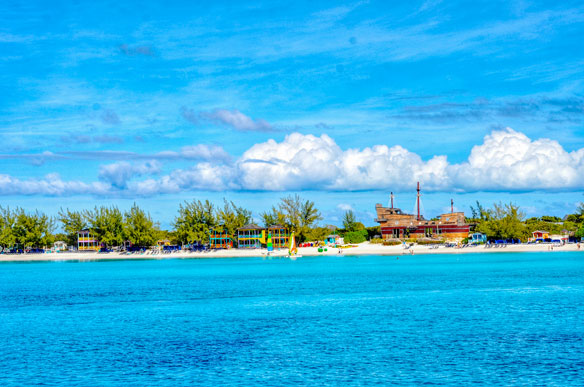