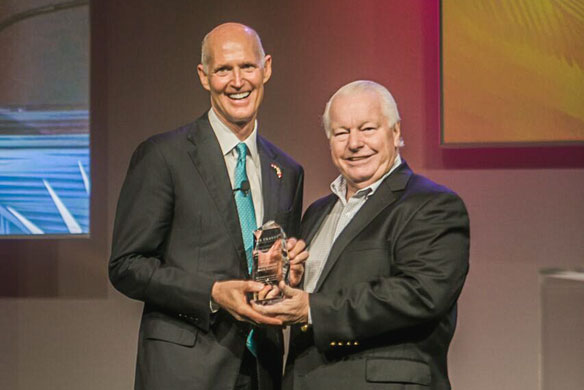 Florida’s governor has been honoured by the US Travel Association for his ongoing commitment to tourism, but largely for his protracted and ultimately successful legislative battle to maintain full funding for the state’s destination marketing organization.
Fittingly, The Distinguished Leadership Award was presented to Gov. Rick Scott by US Travel CEO Roger Dow during a luncheon at the recent Florida Governor’s Conference on Tourism in Hollywood.
Dow told delegates, “Throughout his term, Governor Scott has demonstrated an outstanding commitment to travel as a critical pillar of the economy and jobs base in the Sunshine State.”
And he added pointedly, “In particular, Governor Scott’s efforts to protect Visit Florida’s funding from misguided political challenges have paid dividends for the state. Trying to eliminate the funding was the most insane thing I’d ever heard.”
Dow held up Scott as a shining example to other legislators throughout the USA, stating, “Every state is under budget threat. People want to cut tourism funding because it’s politics and that’s bad.”
“The (nation’s) travel industry is very proud of all that Governor Scott has been able to accomplish during his years in office and other states should be as fortunate to have such a travel champion in the top job.”
Scott replied that he had run for office in 2010 on a jobs creation platform and congratulated the travel industry at large for helping him fulfill his mandate.
He declared, “The numbers are staggering. Over the past six-and-a-half years, we’ve created 1.4 million new jobs, and travel and tourism has been a big part of that.”
Scott conceded, “We’ve just come off a really tough session where I tried hard to convince Tallahassee (legislators) that tourism and Visit Florida are both important to the state.”
“In fact, tourism has changed the entire economy. This year, first-half tourist spending was $60.7 billion, and we will reach my target of 120 million visitors because I don’t want to go back to 86 million.”
Earlier in the conference, Visit Florida interim chief marketing officer Nelson Mongiovi revealed that the first-half result was an all-time high.