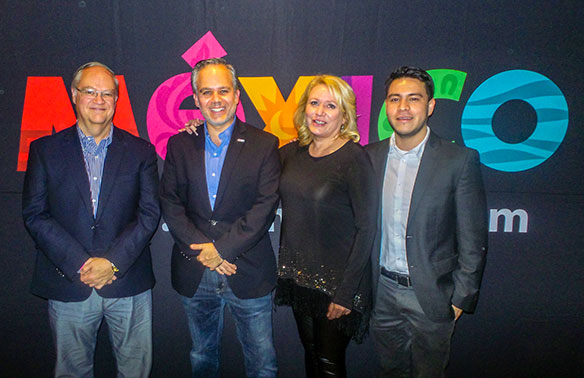 (Photo above: Cesar Mendoza (2nd from l) is now overseeing the Toronto office.)

A former director of the Mexico Tourism Board’s Toronto office says he has no doubt that the apparently imminent closing of that office will be damaging to Mexico’s efforts to attract Canadian tourists.

Jorge Solana, who oversaw the office for years, says he’s convinced the office and its counterparts in Montreal and Vancouver effectively promoted Mexico and thereby benefited the Mexican economy.

The Toronto office says it will be closing at the end of the month. There was no immediate word on whether the Vancouver and Montreal offices will close at the same time. All three have been operating for decades.

The Mexican government announced late last year that it plans to close all of the tourist offices outside the country and turn tourism promotion efforts over to its diplomatic missions, something it says can be done effectively.

Mexico has been a tourism powerhouse in recent years, working its way up the list of the world’s 10 most-visited nations. It’s hugely popular with Canadians.

“The foreign [tourism board] offices played a pivotal role in the marketing and public relations efforts to promote the riches of the country and the great value that the Canadian and other world travellers have had and will continue to have when visiting our country,” says Solana, who still lives in the Toronto area and works in tourism.

“I do understand that the government has other priorities in greater need of taxpayer dollars, but the money used to promote the country should not have been viewed as an expense, but as an investment.”

The announcement that the offices would be closed followed Mexicans voting to change their federal government last year.

The decision to close the offices has been denounced by many of those within Mexico’s tourism trade who fear that tourism promotion will suffer under a new government that they believe attaches less importance to it.

Solana says he believes Mexican consulates and embassies do good work, but added they have many issues to deal with, and he finds it hard to believe “that they will be able to keep up with the tourism sector needs,” adding those in diplomatic missions won’t have the same knowledge of tourism issues as Mexico Tourism Board staffers whose careers revolve around tourism.

Solana says some Mexican destinations have greater financial resources than others and will likely be able to effectively promote themselves in foreign markets on their own.

But he adds that others, “with wonderful assets to showcase” will likely struggle when it comes to foreign promotions.

“I hope the Mexican government will revisit its decision and either provide its consulates and embassies with the staff and resources needed to compete and win in this market or reopen these very important marketing tools,” Solana adds.

Meanwhile, Solana says he’d be willing to draw on his own tourism experience and consider privately repping any Mexican destination wanting to boost its profile in this country.