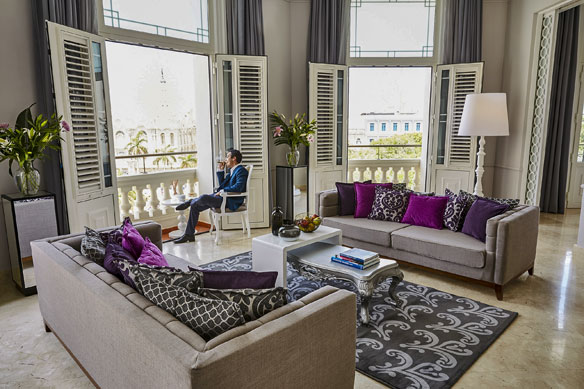 Pictured above: The Presidential Suite at the Gran Hotel Manzana Kempinski offers an extremely upscale stay.

Those staying in Old Havana’s Gran Hotel Manzana Kempinski will have no trouble following in some of Ernest Hemingway’s storied footsteps.

The author, a longtime Havana resident who penned his famed novel The Old Man and the Sea in Cuba, was a regular at El Floridita, the bar synonymous with daiquiris, a preferred Cuban drink for Hemingway.

El Floridita, now hugely popular with tourists, is just a stone’s throw from the Gran Hotel Manzana Kempinski, and the hotel’s Constante bar was actually named after the man who owned El Floridita when Hemingway used to drop in on the now-famous watering hotel, says hotel spokeswoman Claudia Fernandez. Constante serves daiquiris, mojitos and other Cuban cocktails.

And, Fernandez continues, what she flatly states is Havana’s most upscale hotel is within easy walking distance of many other landmarks that like the Kempinski are found in Old Havana, which has earned UNESCO World Heritage Site status.

“It’s the best location,” Fernandez says of her hotel. “All the rooms and suites have amazing views.

“It’s in the the cultural centre of Havana,” she continues. “You can reach everything from here by walking.”

History preserved
The Gran Hotel Manzana Kempinski opened in 2017 in a structure that dates back to the 19th century, when it opened as the Cuban capital’s first European-style shopping arcade.

The exterior has been preserved, but Fernandez reports that those staying there will find a modern interior, with Kempinski stating that “traditional elements such as Spanish colonial cement tiles, crystal chandeliers and intricate metal screens were given a contemporary twist with modern materials and technology.”

The hotel has 246 rooms and suites featuring the likes of high ceilings and French windows.

There are three restaurants, one of which offers dramatic Old Havana views from the sixth floor. 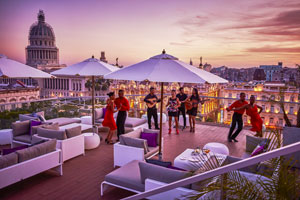 The rooftop terrace has an infinity swimming pool, while the Spa Albear by Resense covers more than 1,000 square metres and features eight treatment areas, a gym, beauty parlour, a relaxation area, and a male and female bathing area.

A cigar lounge is among the three bars and has a sommelier who will “perfectly pair the premium tobaccos with the aromas and flavours” of its drinks and food.

Conference facilities are available and the sixth floor terrace can be used for private cocktail receptions and dinners.

Year-long celebration
The structure the hotel is in has returned to its arcade roots by housing designer fashion boutiques and art galleries.

The hotel attracts both leisure and business travellers.

Meanwhile, Fernandez says 2019 is a particularly exciting time to visit Havana, which is now marking its 500th year.

“We are celebrating all the year,” she says of the city.

The Gran Hotel Manzana Kempinski is doing its part to mark the milestone, in part by hosting art exhibits.

More information can be found at kempinski.com/lahabana.