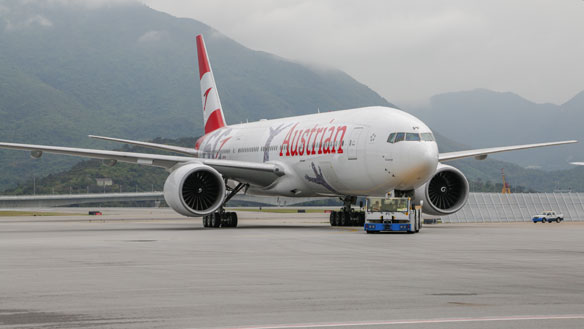 Austrian Airlines reports its aircraft will continue to be visible in Canadian airspace this summer, even as codeshare partner Air Canada’s planes will be the ones physically linking Toronto and Vienna.

Sherif Sedhom of the Lufthansa Group’s Toronto office told a recent Toronto gathering that plans call for Air Canada aircraft to be carrying passengers between the cities as of April 29.

But he noted the same date will see Austrian Airlines travelling between Montreal and Vienna, with service reaching daily flights in the summer.

“This doesn’t mean that Austrian Airlines won’t be flying to Canada,”

he said of the Air Canada aircraft being used to link the Ontario and Austrian capitals. “Austrian Airlines will be flying to Montreal instead.”

Air Canada has decided to use a B787 Dreamliner on the Toronto route.

Sedhom said Austrian Airlines serves around 85 destinations from Vienna, having a particularly strong network in Central and Eastern Europe. “This has always been Austrian Airlines’ forte.”

The carrier has seven lounges at Vienna’s airport.

Music is in the air
He said the airline – which says it offers “The Charming Way to Fly” – has been said by authoritative Skytrax to offer the best airline staff service in Europe for five straight years.

Austria’s musical heritage was repeatedly referenced during the gathering, with Pablo Bolanos of Vienna’s Mozart Orchestra saying tourists can visit “places where the history” of music was made.

Vienna’s musical scene is underscored in part by its famed waltzes.

Austria’s Toronto-based consul and trade commissioner Christian Lassnig noted Salzburg is another city synonymous with music, among other things being the setting for the movie The Sound of Music.

Other Vienna attributes include its being home to 200 castles and palaces and 100 museums.

The gathering was also told that Innsbruck has twice hosted the Winter Olympics and was billed as “the capital of the Alps.”

The audience also heard that Austria’s westernmost state of Vorarlberg, in turn, has the highest mountains in Austria and offers numerous outdoor activities, such as hiking during the summer.