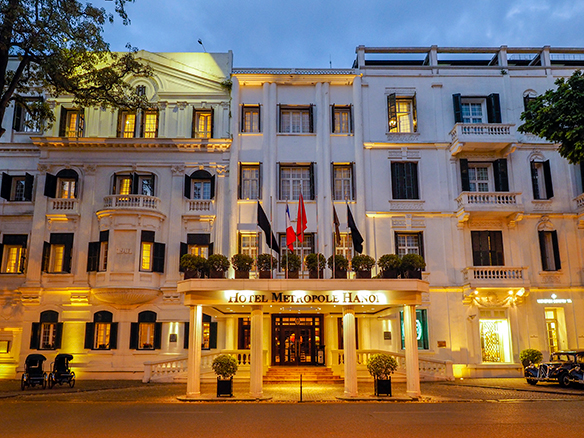 Famous guests are a specialty at the Sofitel Legend Metropole Hotel, which has a hundred-plus years of history in Hanoi, Vietnam. During that time, some very notable names have signed the guest registry at the hotel, which was originally named the Grand Hotel Metropole and opened in 1901.

These include the presidents of numerous countries, including Sweden, Portugal, Switzerland, Australia, South Korea, and Singapore, to name some, plus our own prime ministers Jean Chretien and Stephen Harper, and presidents Jacques Chirac and Bill Clinton. Many celebrities and filmmakers have also roomed at the Metropole, including Brad Pitt, Angelina Jolie, Colin Farrell, Roger Moore, Pete Seeger, Robert De Niro, Danny DeVito, Ralph Fiennes, and more.

Most recently, the Metropole was the focus of world media scrutiny when it hosted visits by US president Trump and North Korean leader Kim Jong Un for a short summit in late Februrary.

Regular guests may not have an entourage, or be able to book one of the hotel’s multi-room luxury suites, but they will nonetheless experience the elevated service levels at this historic property. It is a slice of old-world calm amidst the frantic street life just outside in central Hanoi.

The Metropole is situated in Hanoi’s Old Quarter, a short walking distance from cultural landmarks like the Hanoi Opera House, Hanoi History Museum and the Ho Hoan Kiem Lake. The small lake is rimmed by a walking promenade that is a popular stroll both day and night.

During its history, the Metropole has established a tradition as a long-stay luxury refuge for playwrights, authors and actors. Amongst them were Charlie Chaplin, Graham Greene and Somerset Maugham, to name a few who booked into the Metropole for extended stays.

Dining rooms and lounges at the Metropole have also become well known, each delivering a taste of the exotic. Le Beaulieu is renowned for its French fare; Spices Garden offers the best in Vietnamese gastronomy and La Terrasse is inspired by famous French sidewalk cafés, giving guests the chance to sit and watch life go by in Hanoi. The Bamboo Bar offers sheltered poolside lounging, and this courtyard retreat has won recognition as one of the world’s coolest bars.

It was during the renovations to the Bamboo Bar in 2011 that a relic from the Vietnam War was discovered in the bowels of the building. The renos revealed a narrow and cramped bomb shelter had been constructed as a refuge for guests seeking to escape the bombing of Hanoi by American B52 aircraft. It had been built in 1960, and amongst those taking shelter during the air attacks on Hanoi were anti-war activists Joan Baez and Jane Fonda.

Baez had actually been staying at another hotel, but sought shelter at the Metropole during bombings over Christmas. She recorded an anti-war song in her hotel room, with the sounds of the attack audible in the recording.

After the war, the bunker was closed and sealed until its chance rediscovery during the Bamboo Bar renovations. It was reopened in May 2012 to honour the efforts of employees during the hardships of war. Now, the hotel operates daily tours of the bomb shelter, which is accessed from a hotel hallway by a narrow circular stairway, exclusively for hotel guests. It is just one more compelling reason to experience a stay at the Sofitel Legend Metropole Hotel.