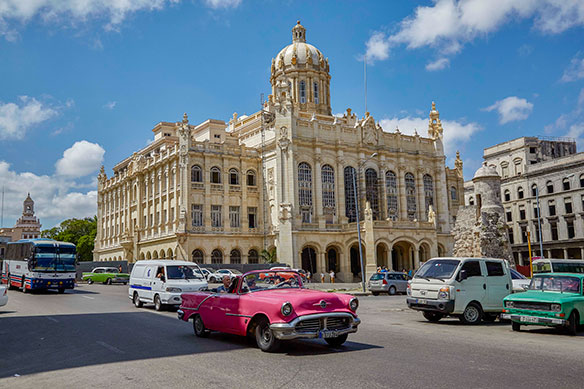 Those wielding brooms and brushes are out in force as Cuba’s largest city gears up for a major milestone.
Cuban tourism minister Manuel Marrero visited Toronto recently, providing an update on all that’s happening in his homeland, including preparations for Havana’s celebrating its 500th anniversary in 2019.
“This winter you will find that our capital looks different and this is because it’s in a process of working to recover its heritage, opening new hotels, shopping and cultural centers, all as part of the preparations for the celebration of the 500 years,” Marrero said of a city which has been seeing ongoing restoration for decades.
Havana, which will be the latest of several Cuban cities to reach five centuries, is expected to see year-long celebrations – including concerts – as it marks 500 years of existence.
The anniversary will coincide with ongoing tourism infrastructure development in Havana and other parts of Cuba, with a recent addition to Havana’s hotel scene including an upscale Iberostar property found in an Old Havana landmark building.
In all, Cuba now has 69,250 hotel rooms, two-thirds of them in the four- and five-star categories.
Thousands of more are in the works and Marrero noted the next 12 years will also see the country’s tourism infrastructure adding more facilities for the likes of nature enthusiasts, campers and boating enthusiasts.
Cuban officials note that the country is not only adding hotels but renovating many existing ones.
“This winter season we will have a much more renovated and and competitive hotel infrastructure. We will offer a superior quality service compared to the previous year, according to surveys from our clients,” Marrero said.
Canadian visitations to Cuba have fallen 8% this year but Marrero said Canada remains his country’s premier market and noted that September visits to Cuba were up 75% from September of last year, when parts of the north coast were battered by Hurricane Irma. The jump in visitations is seen as proof that any lingering concerns over hurricane damage have been forgotten.
In all, Cuba has seen some 3,553,772 foreign tourists this year, just shy of the number it saw in all of 2017, and up 19% from 2016.
Marrero said winter air capacity from this country to Cuba will probably be similar to that of last year but could increase if demand warrants it.
He said Cuban tourism attributes include history, culture and beaches, with some of the beaches “among the best in the universe.”
He also said tourists will find WiFi connectivity improving in his homeland.
Marrero also praised Cuba as being a particularly safe country.