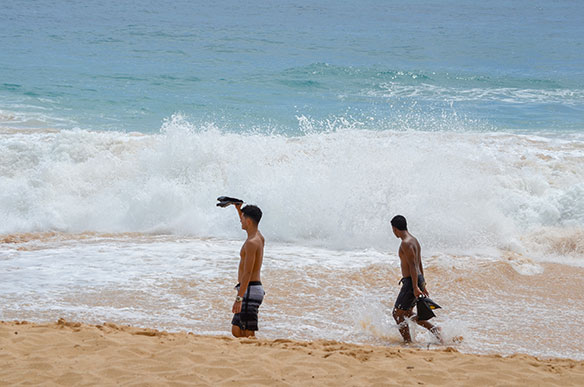 Waikiki, Hawaiʻi has once again proven to be an ideal location for the Global Tourism Summit, a professional gathering focused on world tourism trends, strategies and solutions.

As a microcosm of global tourism trends and seismic natural events, there is hardly a more suitable destination than Hawaiʻi. The relatively tiny chain of tropical islands lies far from any mainland on either side of the Pacific, yet its combination of exotic tropical beauty, lush beaches, warm inviting weather, modern service infrastructure and top hotels/resorts draws millions of tourists each year, almost all by air. There is no other tourist destination like it, anywhere.
Hence the agenda of the Global Tourism Summit, a three-day gathering in early October at the Hawaiʻi Convention Center in Honolulu. It was attended by over 2,200 tourism product managers, buyers, sellers and other delegates from 32 different countries, all of whom were engaged in matters of fundamental world tourism changes through the agenda of the conference – “Charting the Course.”
That theme spoke to the need for travel destinations to constantly seek a balance between the economic infusion tourism generates, against the negative impacts it can cause for residents and communities.
“Balancing tourism’s economic benefits for business and government with its effects on residents’ quality of life is delicate and requires all points of view to come together and work toward solutions that are fair and reasonable,” said George D. Szigeti, president and CEO of the Hawaiʻi Tourism Association, during his opening address at the Summit.
He noted that visitor spending in Hawaiʻi in 2017 was the highest ever, and that the trend towards another record for arrivals and spending was continuing through the first eight months of 2018.
But he also addressed the growing concern with ever-increasing tourism arrivals,
in contrast to the economic benefits that these represent.
“We have to consider how to chart the course for seeking a balance of long term tourism success against the priority of maintaining the quality of the destination,” said Szigeti. That outlook includes how to not only promote tourism to Hawaiʻi but also protect it; and how best to invest in tourism to preserve the most valuable qualities of the destination for the next generation. 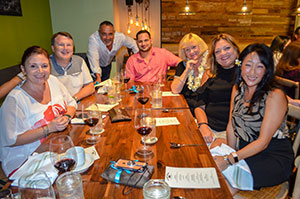 Hawai‘i Open For Tourism
Szigeti spoke while the sun shone brightly outside and tourists from around the world streamed out of their nearby hotels and resorts for another day in paradise. Their presence confirmed that Hawaiʻi tourism was back on course and open for business, after a challenging year of natural events that shook up the state’s stellar tourism image.
There were the dramatic eruptions of the Kilauea volcano on Hawaiʻi Island that caused weeks of lava flows and smoke, starting in May. Then Hurricane Lane swept
into Hawaiʻi in late August, lashing Hawaiʻi Island with heavy rains. And finally there was the powerful tropical storm Olivia that crossed the state in mid-September, making landfall on Maui and Lanai.
“We had to consider possibly canceling the summit because of the most recent storm,” said Szigeti, showing evident relief during his opening address. 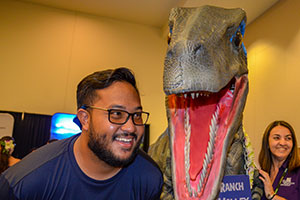 With many scenes from the Jurassic Park films being shot in Hawai‘i, dinosaurs have become a familiar sight in the Aloha state. One of them was in attendance at the Summit.

Growth For Airline Capacity
Regardless of these disruptive natural events, air capacity to Hawaiʻi continues to grow, and was described in some detail by one of the presenters at the Summit. Brad DiFiore, the managing director of Ailevon Pacific Aviation Consulting, took delegates through a country-by-country description of their current commercial air capacities, and the near-future plans for the carriers from those countries.
Some of the most newsworthy were those from Asia, which continues to be the fastest growing source market for Hawaiʻi, outside of the US. This does not include China, which has actually seen a reduction in passengers to Hawaiʻi. Fiore put this down to trade frictions between China and the US, and slowdowns in processing visa applications.
But airlines from other countries are aggressively planning robust increases in capacity to the Aloha islands. For instance, All Nippon Airways is expected to start operating three giant A380 aircraft to Hawaiʻi from Japan in 2019. Fiore said that two airlines in competition with ANA – Japan Airlines and Hawaiian Airlines – are seeking approval for a joint venture to increase capacity to Hawaiʻi.
Air Canada will be launching a new service to Kauai with its new mainline Boeing 737 MAX-8 fleet starting in December. The airline will also be doubling the frequency of its flights from Western Canada to Hawaiʻi, including Honolulu, Maui and Kona. These will also operate using the new B737 MAX aircraft.
Southwest Airlines is expected to start operating flights in 2019, from Honolulu, Maui, Kauai and Hawaiʻi Island to the California cities of Sacramento, San Jose, Oakland and San Diego. Meanwhile, Hawaiian Airlines will begin a schedule of non-stop flights to Hawaiʻi from Boston in 2019 – the longest non-stops to the state.
This year, 785,000 seats to Hawaiʻi were added to the total that was available in 2017. And the seat capacity from America is expected to grow by almost 15% this year, with the capacity from Asia growing by 3%.
The only road block Fiore foresees for airline capacity growth to Hawaiʻi is the ability of the airports to receive the increasing number of aircraft, and the hotels and resorts to house this growing wave of visitors. Can Hawaiʻi’s airport and accommodation infrastructure keep pace with the number of airline seats? As Fiore said during the conference, “there is enough global demand for Hawaiʻi that the airlines will fill whatever lodging capacity that you’ve got. The accommodations industry drives airline capacity. Airport capacity will also impact tourism growth.” 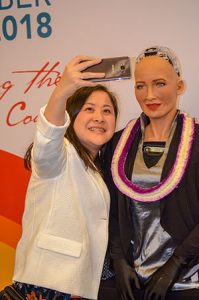 Travel product buyer Solon Chan of Silkway Travel and Cruise in Richmond, BC met with Sophia the android during the trade show at the Global Tourism Summit in Waikiki.

Cultural, Environmental Protection
The concerns that this relentless growth will have negative impacts on the environmental and cultural qualities of Hawaiʻi – and indeed world destinations like Venice, Barcelona, Amsterdam, Iceland and more – dictated the outlook of other presentations at the Global Tourism Summit.
One of the best was the “Cultural Tourism and the U.N. Sustainable Development Goals,” which featured presentations by five experts in the field, from both Hawaiʻi and abroad. One of the most compelling speakers of the Summit was Aulani Wilhelm, the Global Oceans lead for Conservation International, who probably had the most authentic connection to the environment as anyone at the event.
She was a sailor on board the voyaging canoe Hōkūle‘a, which completed a number of trans-Pacific voyages that retraced the journeys of the early Polynesian ocean explorers who found and populated Hawaiʻi. The double-hulled sailing canoe used ancient wayfinding techniques of celestial navigation to complete the voyages.
Wilhelm spoke from the perspective of someone who has had first hand experience of environmental changes in the Pacific Ocean.
“There is a tension between the need to preserve our natural wealth and the desire to be a tourist, with all the air seats, hotel rooms and tour programs that go with it. We don’t set out to destroy our environment, but that’s what happens. That tension is everywhere, but we have to remember that the ocean drives life on earth.”

The Canadians are coming

Susan Webb, president of VoX International, which manages the Hawai‘i Tourism Authority account in Canada, was on hand at the Global Tourism Summit to describe how many Canadians were visiting Hawai‘i, how much they were spending, how long they were staying and more. Following are some of those key indicators:

From Jan. to July 2018, arrivals to Hawai‘i from Canada were up by 5.4%, to over 332,000.
Visitor spending was up 7%, to $663 million in that same time period.
Visitor days were up by 3.8% in that same time period.
The average stay for Canadians in Hawai‘i is 12.5 days.
WestJet assigned 285,614 air seats to the Hawai‘i market in 2017.
Air Canada assigned 172,275 seats to the Hawai‘i market in 2017, with more in the works for 2018.
Multi-generational travel continues to be a strong market trend.
A resurgence in the value of travel agencies has been noted.
Visits from eastern Canada are increasing, but travel from BC and Alberta still accounts for 57% of the total.
Target markets include affluent high spenders, snowbirds/retirees, history and culture buffs, nature/adventure experience seekers and romance travellers. 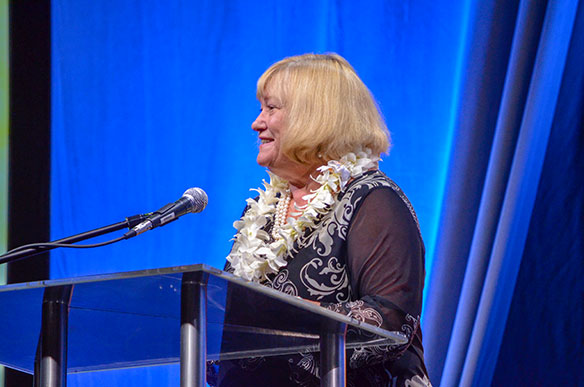