Planes, trains and Automobiles in museums around England 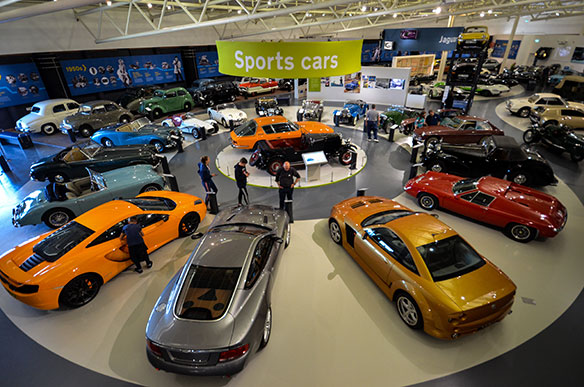 On June 6 this year, a few historic relics from the golden age of flight lifted off from an airfield in eastern England to participate in a re-enactment of the D-Day landings. It was 75 years to the day since these same aircraft had taken off in the early morning gloom to start the attacks that would eventually bring WWII to a close.

This reenactment of the paratroop invasion was just a fraction of the original armada, when fleets of C-47 Dakota transports filled the skies over France. But even those few C-47s galvanized onlookers with their fly-past, generating an historic roar that is now seldom heard. Such is the impact of motorized moments in history. 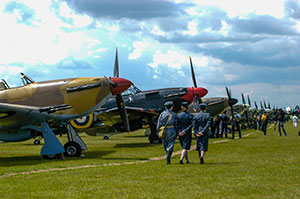 Britain was the source of many of those moments through the 1900s and even the 1800s, when coal-fired steam trains carried the message of industrialization through the country. In the following century came landmark names like Bentley, Triumph, Jaguar and Spitfire, all of which helped cement the British reputation for design excellence and innovation.

A vacationer can easily add this motor-driven element of English history to their travel itinerary, setting aside a few days to visit the places where British horsepower pre-eminence was established. And it’s probably best to conduct such a tour behind the wheel of a rental, since many of these museums are located out of town, in the countryside.

Such is the case with the Imperial War Museum Duxford, located near to Cambridge, northwest of London.

The recent C-47 paratroop flight re-enactment served to refocus attention on this airfield, which played a key role in other aerial campaigns during WWII. The former aerodrome of Duxford is now home to the largest collection of historic aircraft in England, and operates as part of the Imperial War Museum.

The IWM at Duxford is a sprawling facility that gives visitors a thoroughly engaging experience. The star of the show is the giant AirSpace gallery, a separate building adjacent to the visitor centre. On display is everything from a Swordfish biplane to a Vulcan jet bomber to a supersonic Concorde, some parked on the floor, others suspended from the high ceiling.

Other nearby hangars feature more of the same, but in more prosaic surroundings. Some of the parked aircraft are in partial states of restoration, and technicians in coveralls can be seen wrenching the multi-piston warbirds. Outside, if they are lucky, visitors may see a WWII-era Mustang or Hurricane taxi down the grass apron and take off on a test flight. The adult entry fee is £19.

It’s a little off the beaten path, but a road trip to see the Classic Team Lotus collection, near the east coast of England in Norfolk County, is well worth the effort – and it is just two hours northeast of Duxford. 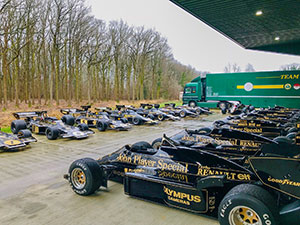 This is where a host of brilliant automotive concepts were conceived, built, tested and engineered to render world-beating sports cars and racing cars. Classic Team Lotus maintains a spectacular collection of Formula One race cars that were piloted by many of the F1 greats, including Jim Clark, Aryton Senna, Nigel Mansell, Mario Andretti and more. These are housed in a smallish museum and maintenance centre located a short distance from the Lotus Cars factory, which produces today’s Lotus sports cars for the street (not open to the public).

But a new larger museum is under construction now and is scheduled to open by next year. Also coming is a new Customer Experience Centre, which will give the visitors the opportunity to take the wheel of a current Lotus sports car on the company’s own twisty test track.

With the wonderfully historic and scenic city of Cambridge as a base for a night or two, the IWM Duxford and Classic Team Lotus are ideal starting points for a British motor tour.

As a centre for the automotive industry through much of the 20th century, Coventry had the misfortune of being a principal target for bombing raids by Nazi attackers during WWII.

Given this, the city wears a modern post-war face in its central district, which was heavily damaged by Nazi bombs. Symbolically, the city has left the remaining frame of the massive Coventry Cathedral to stand, and that space is used for open-air public functions such as markets and the like.

It is just steps from the Coventry Transport Museum, which is housed in a new building in a square next to Coventry’s motorcoach station. The adjacent A4053 highway offers easy access to the museum.

It is well worth a visit, as it uses an historic time line to chronicle Britain’s rich history of motoring. This includes everything from tractors and tanks to sports cars and frumpy sedans, and outrageous rocket-powered land speed record holders. There is even a gallery for England’s iconic taxi cabs! An adult admission ticket is £14.

Innovators in the early 1900s wasted no time in finding ways to bring internal combustion to the world of bicycles. From this arose Britain vibrant motorcycle industry, which was defined by names like Vincent, Velocette and Matchless in the early decades of the century, then by others like Norton, Triumph and BSA later on – before being toppled by stronger competition from Japan in the 1970s. 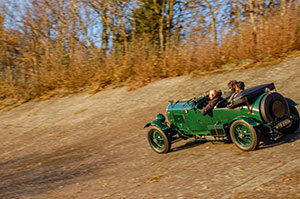 The National Motorcycle Museum features a vast selection from these chapters of history, including marques like Triumph that have since risen from the ashes and reestablished Brit bikes on the world stage. The National Motorcycle Museum is located between Birmingham and Coventry, very close to the M42 multilane motorway. Adult admission tickets are £10.

One of the top automotive collections in England is at the British Motor Museum, located in the countryside just 26 km. from the famous town of Stratford-On-Avon. It is likely the one with the best presentation in any case, as it features an impressively large main exhibit hall that groups cars of similar intention. There is, for example, a collection of track-oriented Jaguars from different eras in one spot, and another area that features lower cost production sports cars like MG, Triumph, Sunbeam, Healy and others. There is even a “Mini Mezzanine” populated with the tiny, ground-breaking micro-cars dating to the 1960s. It is £14.50 for an adult ticket to the British Motor Museum.

Before there were planes, before cars and motorcycles….there was trains, which defined a key shift in Britain’s march to the industrial age. The sprawling rail station in the northern England city of York is the location of the National Rail Museum, which has the largest collection of historic train engines in the country. It does a great job of describing how steam locomotives helped drive the rise of industrial Great Britain in the 1800s. 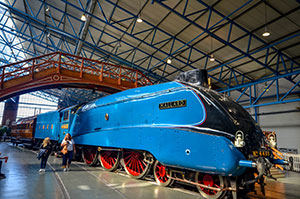 On display, for example, is the Mallard, the world’s fastest steam train (at 126 mph!) from 1938; the artistically streamlined Duchess of Hamilton, also from 1938; and a replica of Stephenson’s Rocket, one of the earliest steam locomotives from 1829 that established the supremacy of steam-powered technology at that time.

Entrance to National Railway Museum is free, and it is located within walking distance to York’s many historic sites, including majestic York Minster and the ruins of St. Mary’s Abbey. York is the northernmost point on this historic horsepower tour.

One of the most unexpected locations for automotive collecting and display is at National Motor Museum in Beaulieu, near to the southwest coast of England in Hampshire county. The Beaulieu estate resides in a pastoral rural landscape as part of the historic New Forest and is the home of Baron Montagu of Beaulieu, whose family founded the collection.

Beaulieu is the most scenic of all the country museum locations, and is worth making the diversion westward away from the Midlands where most of the other museums are concentrated.

Within the Beaulieu complex, the National Motor Museum preserves and displays a vast array of vehicles across all eras of motoring, both on two wheels and four. There is a predominance of British machinery, but highlights from other nations (BMW, Ferrari, Ducati, etc.) are also displayed.

A recent addition has been a separate gallery that houses props and cars used in the auto antics of “Top Gear,” Britain’s favourite satiric road test TV show. There are other entertainment-focused displays in the main gallery, with vehicles driven by everyone from James Bond to Mr. Bean.

Before departing England, it is recommended to schedule a visit to the Brooklands Museum, which preserves a pivotal place in the history of both automobiles and aircraft. Brooklands is the location of the world’s first purpose-built auto racing circuit, which was constructed in 1907. Although most of the track is now gone, a long, steeply banked section remains near the museum. It is a remarkable sight.

Brooklands doesn’t have a modern, spacious exhibit hall, as its collection is divided amongst a group of historic ground level buildings that once served racing purposes. These are chocked full of cars and motorcycles.

But a large display area has been set aside for an aircraft collection – because Brooklands was also one of Britain’s first airfields, and was the location of aircraft manufacturing operations from 1918 to the beginning of the commercial jet age. On display there is a unique collection of Hawker and Vickers aircraft, such as the VC10 commercial airliner. The adult admission fee is £14.50.

Brooklands is located in Surrey, near the town of Weybridge. It is a relatively short drive from there to Heathrow, where vast volumes of traffic flow down multi-lane freeways to the five terminals at LHR. Lying in wait is a potentially frantic rental car return process that can shred nerves as your flight time approaches. Welcome back to the modern world…sigh!

Anstey Hall, Cambridge: A country manor on the main road into the city, with a stately dining room, in-house bar. ansteyhall.com/

Mount Royale Hotel & Spa, York: Big rooms in a rambling heritage property near the centre of York, with a dining room, bar. www.mountroyale.co.uk 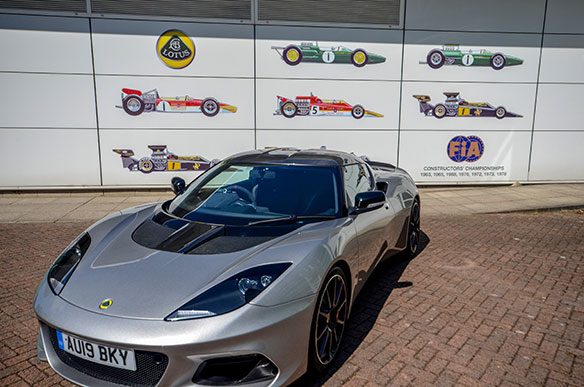