Why use a travel advisor?

Just ask Carnival, it can give your clients lots of reasons 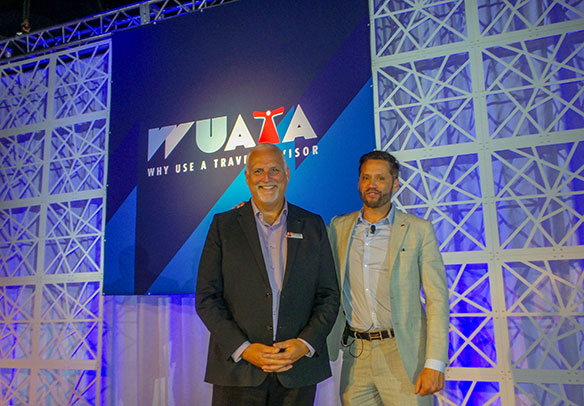 “It’s nice to see Carnival has our backs.”

Perez, senior vice-president, global sales and trade marketing for Carnival Cruise Line, sports a tattoo on his left shoulder that reads Travel Agents Rock, underscoring his belief in the importance of the travel agency community, a belief on display in Toronto receantly when the cruise company held one of the four Why Use A Travel Advisor campaign events it’s hosting in North America this year.

The events are for agents, their clients and “soon-to-be clients” and are seen as a way of enhancing the importance of agents among the public.

“We’re on this mission to make sure everyone knows travel advisers still exist. We’re proud to get that word out…,” Perez told his Toronto audience.

“Thank you for all you do. You really make a difference in people’s lives.”

Perez – at a festive event that drew 300 people and featured the likes of a “Genius Bar” where Carnival staffers answered questions visitors had – said he frequently encounters people who are surprised that travel agents still exist; and he responds “why wouldn’t you use a free personal assistant. We [Carnival] decided that we would help get the word out [that travel agents are still here].”

The line also premiered the latest endeavour in the Why Use A Travel Advisor campaign – a five-part video series featuring travel agents and their clients sharing travel tales that tell the “WUATA story.”

The videos are available on the WUATA Facebook page and Carnival’s WUATA.com website, which also features a click-to-share tool that travel agents can use to send the videos directly to clients.

Through WUATA, Carnival has a contest to find the “Most Trusted Travel Advisor,” with clients submitting stories about why their travel professional is the best. In addition to the title, the winning agent and their client nominator will be awarded a cruise on Mardi Gras – debuting in August 2020 – with round-trip airfare, and the agent also will receive a $1,000 bonus and the commission from their client’s Mardi Gras cruise.

Perez, in the industry for over 30 years, credits agents for much of his personal success.

Industry on a roll

He said Carnival is both adding ships and upgrading others. The upcoming Mardi Gras will have “the very first roller coaster at sea,” he continued.

Charlie Silvia of CLIA, in turn, told the audience that the cruise industry is on a roll, likely seeing 30 million passengers this year. That number is expected to rise by another 10 million in the next eight years, he added.

Sylvia said the cruise industry has close ties with agents, with more than 75% of its bookings coming through them.

“Whenever you see a brand new ship launched, it was launched by travel agents,” he continued.

Meanwhile, agents Travel Courier spoke to at WUATA were appreciative of the event.

“I think they [Carnival] realize the importance of travel agents,” said Mary de Almeida of Bob Family Travel, Travel Only in Brantford, Ont. “It’s nice to see Carnival has our backs.”

“I think it’s just nice to see the appreciation,” added Coralie Belman of Toronto’s Let’s Get Out of Here agency. “A lot of times you don’t feel appreciated [in everyday work] with all the struggles to make a sale.”

Pat Probert of Bob Family Travel, Travel Only in Toronto said he was “very appreciative” of Carnival’s efforts, adding he believes that they will increase sales not only for the agents who attended the event, but others as well.