Secrets of the city await discovery 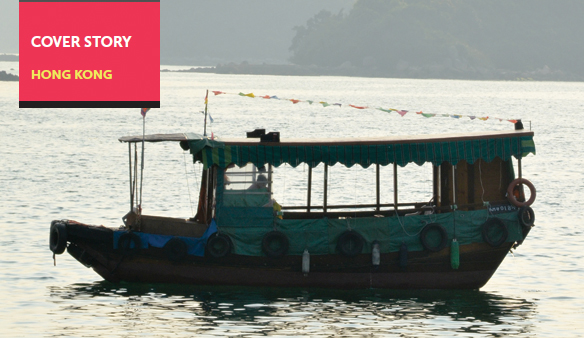 Story and photos by TED DAVIS

The British flag is gone now, but it once flew over this fishing village, as it grew to be a global powerhouse of trade, commerce and tourism on the eastern edge of Asia.
Arriving in 1841, British occupiers saw enormous potential in the way that Hong Kong Island and the Kowloon mainland circled Victoria Bay (now Victoria Harbour) to create an ideal, sheltered port – not to mention a commanding market position next door to China, in a stunning geographic location. 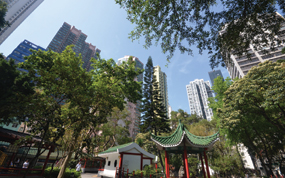 Possession Point marks the spot where a Union Jack was planted to confirm the occupation of Hong Kong by British colonizers in 1841.

Now, a sea of distinctive business towers on Hong Kong Island reach for the sky, facing the harbour with Victoria Peak rising steeply behind. The downtown business districts like Wan Chai, Sheung Wan and Central are so dense with city developments that it seems unlikely that any parts of the original Hong Kong would still exist.
But they do, and they lie somewhat buried within the busy cityscape, waiting for discovery by visitors. These original enclaves of Hong Kong are most effectively toured on foot, giving full rein to random explorations. These will unfold in spots like Possession Street,Hollywood Road, Tai Ping Shan, Peaceful Hill, SoHo, PoHo, and Lan Kwai Fong, to name some.
An Old Town Central self-guided walking tour (by the Hong Kong Tourism Board) opens the door to these historic areas, many of which have evolved into trendy neighbourhoods where cafés and boutiques sit next to more traditional grocers and produce vendors – or even a coffin maker! These are the places where modern Hong Kong has its roots. For instance, the flowers and trees continue to thrive at tiny Possession Point under the looming business towers, where that first British flag was planted.
An historic highlight on such a tour is the Man Mo Temple, oneof the oldest and most venerated temples in Hong Kong, recognized for its ceramic figurines, wood carvings and plaster murals. But at the other end of the spectrum, both the PoHo and SoHo districts reflect the progression of the past to the future, with clusters of galleries and cafés, plus alleyways providing wall canvases for murals and graffiti art. Photo shoots with fashion models are also not uncommon here. Similarly, Peaceful Hill brings its own alternative vibe.

One increasingly popular direct route to the essence of Hong Kong heritage for visitors is through their stomachs. This can be accomplished by booking a foodie tour through suppliers that have been vetted by the Hong Kong Tourism Board, and can found on its website, www.discoverhongkong.com .
These offer the welcome opportunity to explore different Hong Kong dishes under the direction of a qualified guide, who takes the language guesswork and picture-pointing procedures out of the selection process.
Possibly the most adventurous choice for a foodie tourist is to forgo their hotel breakfast and head out to discover how regular Hong Kong folk get their day off to a start. This can be done in the commercial district of Shim Shui Po on the Kowloon side, a gritty, no frills side of the city where workers duck into tiny eateries for traditional Cantonese breakfast dishes before dashing off to work.
The Sham Shui Po Foodie Tour is offered by Hong Kong Foodie Tasting Tours. This casual noshing and strolling through Shim Shui Po takes the entire morning and also covers brunch.

Another way to dig below the shiny metropolitan surface of Hong Kong is to attend an event that has a deep mythical meaning for the Cantonese residents of Yuen Long Town, in the New Territories.
Every year, on the 23rd day of the third lunar month, the busy centre of this town erupts with colour and excitement, as a holiday is proclaimed to celebrate the blessings of the Chinese goddess of the sea, named Tin Hau.
The highlight of this holiday is a parade – and what a parade it is. Teams in bright, matching outfits congregate in the morning and unveil the giant snaking dragons and lions that they have crafted in the preceding months. The parade marshall gives the green light and the assembled creature teams take to the streets of the parade route, while throngs of residents line the sidewalks. The crash and clatter of drums and cymbals is constant, and the marchers seem undaunted by the escalating heat of the day. 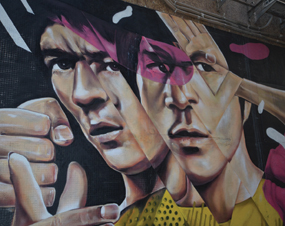 A painting of Bruce Lee is amongst the graffiti art that gets wall space in some of the narrow alleys that cross through SoHo, near Hollywood Road.

Yet another way to experience a different, hidden aspect of Hong Kong is to simply leave the city behind. It’s in places such as Cheung Chau Island, Tai O on Lantau Island, Peng Chau Island, Repulse Bay Beach, and Sai Kung Town that visitors might have their biggest Hong Kong image rethink. These places are defined, not by glass towers, but by small, quiet harbours, leafy green islands and even soft beaches.
At Sai Kung, for instance, a boat tour to see parts of the UNESCO Global Geopark in the South China Sea is an attractive option, and can be readily booked. Yes, a natural environment that has the UNESCO stamp of approval is only about 50 minutes away from one of the busiest cities in the world. It is yet another side of hidden Hong Kong.