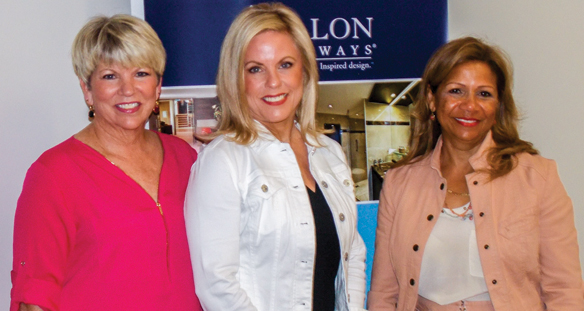 These are busy days for Avalon Waterways.
Terri Burke, the river cruise line’s managing director (pictured above with Globus’ Patrice Geske (l) and Stephanie Bishop (r) at the Globus family of brands’ offices in Toronto), was in Toronto recently to update the trade on all of the new happenings on the company’s itinerary as it sails into the future.
To start with, Burke observed that, while 2016 had been a tough year, 2017 has seen a double-digit rebound, and 2018 is looking even better – in fact, it’s trending ahead of 2017.
But the company isn’t sitting on its laurels, as Burke revealed a range of ongoing initiatives that are all directed at building on the current growth trend.
She pointed to the addition of a new culinary director; the line’s Avalon Fresh program; the introduction of new Active Discovery on the Rhine departures; new theme cruises; the launch of a new ship in Asia in 2018; a new Vietnam/Cambodia itinerary; and its No Single Supplement in Europe initiative.
That’s a lot of new things, but it’s all built around Avalon Waterways’ strategy of letting its passengers “see the world their way.”
In fact, she said that the river cruise company’s signature Panorama suites, coupled with its clients’ first customer service strategy are just two things that set it apart from its competitors.
In 2017, Burke reports that the Mekong was its top performer in Asia, while in Europe, the Rhine was the top performer.
Burke also pointed out that Avalon Waterways has seen significant growth in its specialty cruises and that’s a trend that’s continuing in 2018, while charters of its ships are double what they were in 2016. And with its No Single Supplement initiative, the company has seen its single traveller business grow by 70% from 2017 to 2018.
As for Canada, Burke said it is doing very well into 2018.
www.avalonwaterways.ca