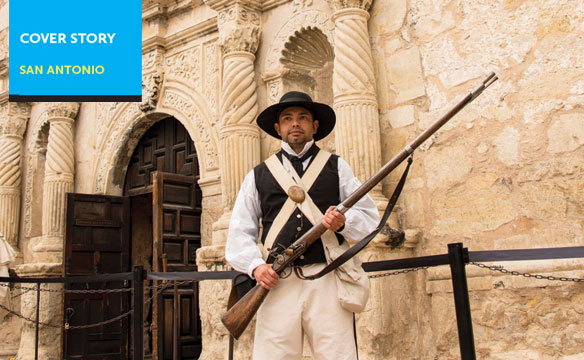 HOME TO TEXAS’ TOP TWO ATTRACTIONS – THE ALAMO AND THE RIVERWALK – SAN ANTONIO, LIKE THE REST OF THE LONE STAR STATE, IS PROVING TO BE A POPULAR VACATION DESTINATION FOR CANADIANS, ATTRACTING ABOUT 60,000 A YEAR.

And getting there has never been easier, with Air Canada launching new daily direct service from Toronto to San Antonio in May.
A delegation of San Antonio tourism officials recently visited Toronto to promote Texas’ “City of the Alamo” and celebrate the new Air Canada flights.
“This is a first and we’re very excited,” Visit San Antonio’s Dave Krupinski told Travel Courier. “This flight is a game changer. It is a big deal for us, and we’re in it to work together with Air Canada.”
Air Canada’s Duncan Bureau said “size matters” in Texas and noted that Air Canada is now the largest operator into the Lone Star State.
San Antonio, which will celebrate its 300th birthday in 2018, has plenty to offer.
Offering true Texas heritage and Mexican culture, Krupinski said San Antonio is a tale of two cities that “agents can sell with confidence.”
“For something new, San Antonio is a quick and easy trip,” he said. “We’re a big city with a small town feel. San Antonio delivers. Clients will come back-and say ‘I’m so glad you recommended San Antonio to us.’”

THE ALAMO
In the 18th century, Spanish priests established five Catholic missions along the San Antonio River. The systems instituted by the friars led to an ethnically diverse society that continues to influence the city. Today, the five missions (Mission San Antonio de Valero, Mission San José, Mission Concepción, Mission San Juan, and Mission Espada) represent the largest concentration of Spanish-colonial missions in North America and have been named a UNESCO World Heritage Site – the first in Texas.
The Alamo was founded in 1718 as the first mission in San Antonio, serving as a way station between east Texas and Mexico. In 1836, decades after the mission had closed, the Alamo became an inspiration and a motivation for liberty during the Texas Revolution. For 13 days in 1836, close to 200 Texas defenders held the Alamo from approximately 2,500 of General Santa Anna’s troops from Mexico. The most famous of the defenders, William Travis, James Bowie and David Crockett, died fighting overwhelming odds for freedom. Visitors can watch a depiction of the Battle of the Alamo at a nearby IMAX movie theatre. 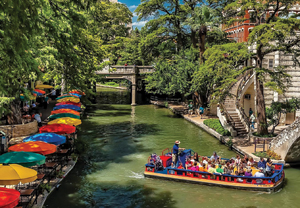 THE RIVER WALK
Next to the Alamo, San Antonio is probably best known for its River Walk, an oasis of cypress-lined paved paths, arched stone bridges and lush landscapes. Giving the city a European feel, the River Walk, or Paseo del Rio, is the largest urban ecosystem in the US. Tucked below street level and only steps from the Alamo, it provides a serene and pleasant way to navigate the city.
Visitors are invited to take their time and walk the walk, ride a river cruiser or rent a bicycle. With 15 miles of sidewalks and paths, the River Walk provides access to museums, the King William Historic District, 300-year-old Spanish missions, hotels, and shops.
“Just minutes from the River Walk, you can go back 300 years in history,” noted Krupinski.
Dining on the River Walk is diverse and no easy feat, with a Texas-sized sampling of everything from classic Tex-Mex to barbecue, to traditional Italian and contemporary Southwestern fare available in one of the many cafés, restaurants and bistros.
San Antonio boasts a burgeoning culinary scene, offering everything from famed Tex-Mex dishes to what Krupinski likes to call “Tex-Next.”
“Chefs are really taking it to the next level,” he said. “It’s the next evolution of the culinary experience, which also includes craft cocktailing.”
Foodies can also take part in a number of festivals like the Paella Challenge, Culinaria Festival Week and the annual Tamales! at Pearl festival.
Located just a few blocks away from The Alamo is Market Square, known as the largest Mexican market north of the Rio Grande. And, La Villita, a small village that once housed Spanish soldiers stationed at The Alamo, is now a historic arts village well worth visiting, highlighted by local and imported pieces of art, jewellery pottery, and textiles.
A new hot spot in the city is the Pearl district, an historic brewery complex offering dining, shopping, a farmers’ market and event space. It is also the site of The Culinary Institute of America. The converted Pearl Brewery is home to the unique Hotel Emma. 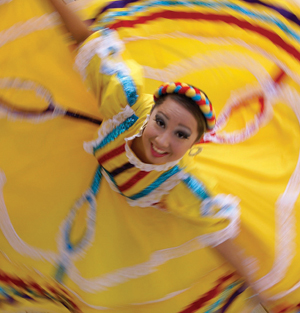 Music and dance flourish in the Pearl district

Music also flourishes here with country and western bands, mariachis and folk singers all singing the song of the city.
Art comes alive with outdoor murals, gardens, architecture, and museums, including Smithsonian affiliates.
For basketball fans, San Antonio is home to the NBA’s fivetime champion San Antonio Spurs. And next year, the city will host the NCAA Final Four.
For families, there’s an assortment of water and adventure parks like SeaWorld San Antonio, Schlitterbahn and Splashtown.
Natural Bridge Caverns, located north of San Antonio, is one of the top caving systems in Texas, where visitors can descend up to 180 feet below ground, while listening to an experienced and knowledgeable tour guide.
Bordering San Antonio is the rolling terrain of Texas’ Hill Country, highlighted by vineyards, hillside bed-and-breakfasts and luxurious, rustic resorts.
Plenty of world-class golf courses are also available around San Antonio, including championship PGA tour courses at the Hyatt Regency Hill Country Resort & Spa, the Westin La Cantera Resort and the J.W. Marriott San Antonio Hill Country Resort & Spa.
www.VisitSanAntonio.com

Where To Stay: For those looking to stay right on the River Walk, the newly renovated Hotel Valencia is a nice option, blending Spanish Colonial and Modern Mediterranean design. Amenities at the 213-room property include complimentary continental breakfast, complimentary WiFi, Dorrego’s restaurant and Naranja lounge. In-room spa services are also available. www.hotelvalencia-riverwalk.com