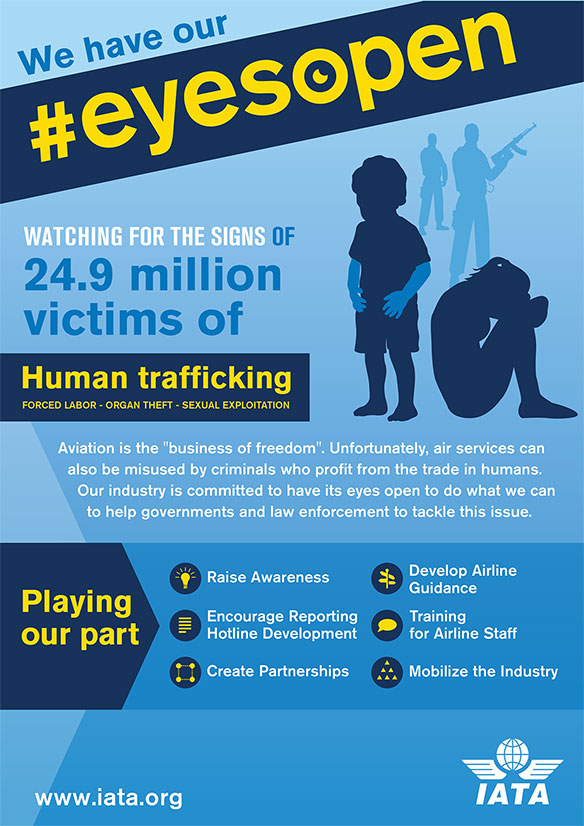 [Editor’s note: This is the seventh part of a multi-part series on the International Air Transport Association (IATA) by CTP’s Quebec editor, Mike Dunbar. This week, Dunbar focuses on IATA’s commitment to fighting human trafficking – a truly appalling crime which mainly targets women and children for forced labour, organ theft or sexual exploitation.]

In the four minutes it takes to boil an egg, 200 people around the world will have become victims of human trafficking.
Furthermore, it’s estimated that a staggering 25 million people – or the entire population of Australia – are trafficked each year to fuel a $32 billion transnational industry that the US State Department says is the fastest-growing global crime.
At last year’s IATA AGM in Cancun, director general Alexandre de Juniac promised that the association would work with member airlines to determine how it could assist in fighting a truly appalling crime which mainly targets women and children for forced labour, organ theft or sexual exploitation.
And at a recent press briefing in Geneva, assistant director of external affairs Tim Colehan said de Juniac’s pledge is in the process of fulfilment having received the approval of carriers to launch an initiative enabling the industry to support governments and law enforcement agencies to clamp down on trafficking.
According to Colehan, the authorities have the responsibility to identify, apprehend and prosecute traffickers, but it’s also an issue for airlines “because the air services which deliver so many social and economic benefits can also be misused by traffickers as a means of transporting victims.”
He pointed out, “There is a growing awareness that customer-facing staff at airlines and airports can play a role in supporting law enforcement by being trained to identify the signs of potential trafficking and reporting their suspicions.”
In the US, he said, Customs and Border Protection, the DoT and Homeland Security run a campaign known as Blue Lightning, which involves training on-board crews, while more and more airlines around the world are already providing similar training as part of their corporate responsibility initiatives.
“IATA’s role is to ensure that all of our member airlines, irrespective of geography and size, are aware of this issue and to provide them with the tools and resources they need, so that they too can assist in the fight against human trafficking,” said Colehan.
He revealed, “We will be launching an #Eyesopen campaign aimed at raising the awareness of the issue among airlines, their staff and the travelling public, and we will be developing guidance and best practice materials that can be used to develop policy and initiatives on trafficking, as well as ‘recognize the signs’ training materials that airlines can include within existing customer-facing staff training.”
Colehan told reporters, “In addition, IATA is calling on governments and their enforcement agencies to provide clear, practical and anonymous mechanisms for airline staff so they can report their observations on potential trafficking situations.”
He noted, “A good example of best practice is in the US where Homeland Security provides a national toll-free tip line and web form where airline staff can report their observations anonymously.”
Experts such as Airline Ambassadors International say indicators of a potential trafficking situation can include a passenger not being in control of his or her own travel documents, seeming frightened, ashamed or nervous, wearing inappropriate clothing for the route or weather and being under the control of a companion or someone claiming to be a parent or guardian who is, in fact, not related to the victim.
And they add that the trafficker may answer questions for the victim, observe the victim persistently, give evasive answers and may not know the victim’s name or personal information even though posing as a relative.
Colehan told the 100 or so reporters present, most of whom flew to Geneva for the briefing, that if they suspected a potential trafficking situation on their next flight the best option was to discreetly inform a flight attendant of their misgivings.
“Cabin crew members are trained to observe, but not get involved or confront anyone they suspect of trafficking,” he explained. “They will inform the captain of their concerns, to report onwards to the appropriate authorities and let them handle the case.”
For more, you can watch IATA’s video – www.youtube.com/watch?v=QWTNYRaPXnc – on #Eyesopen .