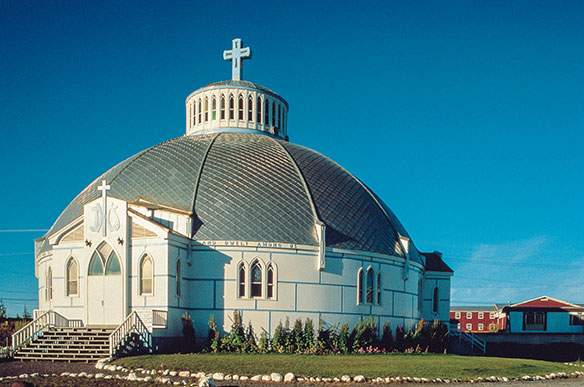 Inuvik, NWT, is far from this country’s major tourism centres, but that doesn’t mean that those involved in the Arctic community’s tourist trade have been immune to the COVID-19 crunch.

The remote community of several thousand – found north of the Arctic Circle and at the end of the Dempster Highway, which winds its way north from Dawson City, Yukon Territory – is home to Inuit-owned Tundra North Tours, which for some 15 years has been offering pretty well year-round tours showcasing Inuit culture and the natural side of a destination that’s on the mighty Mackenzie River; can have the dramatic Richardson Mountains, which separate the northern Northwest Territories from the northern Yukon in view on clear days; and sees constant daylight during summer and the Northern Lights throughout much of the rest of the year.

Company programs include inviting people to stay in an “Igloo Village” Tundra North builds just outside town during winter, enabling people to spend one or more nights in the iconic Arctic dwelling.

Tundra North has just lost tourist groups from such countries as China, Finland and Israel.

“It’s brutal,” Taylor says of business. “It’s all dried up. We’ve lost a large amount of business in a short time. I don’t honestly see us recovering from this for quite a while.”

Travel companies often operate on slim profits, notes Taylor, who adds that off-the-beaten-path companies often are the most vulnerable when times are tough for the travel industry.

It’s not yet clear who will qualify for financial assistance from a federal government which acknowledges that many businesses in this country are going to be in dire straits because of COVID-19 and the economic fallout.

On the face of it, Tundra North certainly deserves to attract people to the Mackenzie Delta region, with Taylor noting it provides “once-in-a-lifetime opportunities to experience the North and experience it authentically through our (Indigenous) eyes. When you come up here, you can experience a lot of things you can’t experience in other places.”

The Indigenous influence is very visible in Inuvik and nearby communities, as is Mother Nature in a part of the world that has a small population.

Tundra North, in years past, has participated in major tourism shows, including RendezVous Canada, a showcase for Canadian tourism. This year’s RendezVous has been cancelled because of the pandemic.

Tundra North has two full-time employees and other part-time ones.

Taylor says the company has been through tough times before, with the financial crisis of 2008 having been damaging. But “this is probably a hundred times worse.”

The company can’t rely on travel bookings from within the Northwest Territories, which has a smallish population that’s generally already familiar with what it offers. Trying to market to other Northwest Territories residents would be akin to “selling fish to Indigenous people who already know how to fish.”

Tundra North has a summertime office in Inuvik, and Taylor works from home during the winter, a season when there are no walk-in clients.

Taylor says these are gloomy times for small businesses both within and outside travel.

“A lot of them won’t be around next year,” he warns. “My heart goes out to all the small businesses.”