Let there be lights 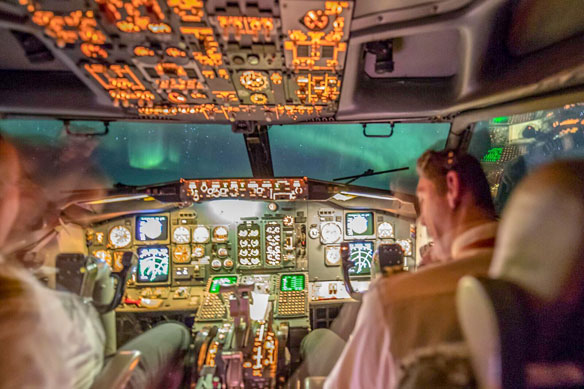 Pallett is with the Whitehorse-based Aurora/360 Experience, which this February plans to carry people in a charter B737 to a height of 11,000 metres, providing what it says will be a particularly spectacular airborne viewing of the Northern Lights.

The Yukon and the Northwest Territories have been working to attract winter tourists eager to see the colourful, shimmering Aurora Borealis displays, but Pallett says the upcoming tour of three to three and a half hours will take sightings to new heights.

The flights will be held Feb. 8 or 9, depending which day has the best Aurora forecast.

“Seeing the Northern Lights at altitude provides an unparalleled view into one of the world’s greatest celestial phenomenon,” Pallett says. “And by charting a course directly to where the Aurora Borealis are, the chances of experiencing them are far greater than a fixed location on the ground.

“February is a great month for Aurora viewing throughout the Yukon and one of the key advantages to the Aurora/360 flights is that we can travel to exactly where the Aurora are happening.”

Pallett says the Yukon’s location makes it a particularly attractive spot to view the Northern Lights. “Our proximity to the Aurora Oval allows us to reach prime Aurora viewing faster than anyone.”

Pallett adds that the Yukon’s smallish population – which, in turn, means there’s little light pollution – is another plus for the territory.

Although plans call for the flight to reach 11,000 metres, a different altitude may be chosen if timely data indicates there are better viewing options. The Northern Lights occur from 80 to 640 kms above the Earth’s surface, with Pallett stating that Aurora /360’s planned cruising altitude “provides us with the perfect combination of viewing and comfort on board.”

The speakers include Pierre Paquette, The Royal Astronomical Society of Canada’s astronomy ambassador, and William Murtagh, assistant director for space weather, energy and environment division of the White House Office of Science and Technology.

Participants will also be offered celebratory gin from the Yukon Brewing Company and aurora photographer Neil Zeller will help passengers with their pictures.

Introductory pricing for the package is $2,939.

Pallet says those involved in the project plan to make it an annual event.

More information can be found at aurora-360.ca.