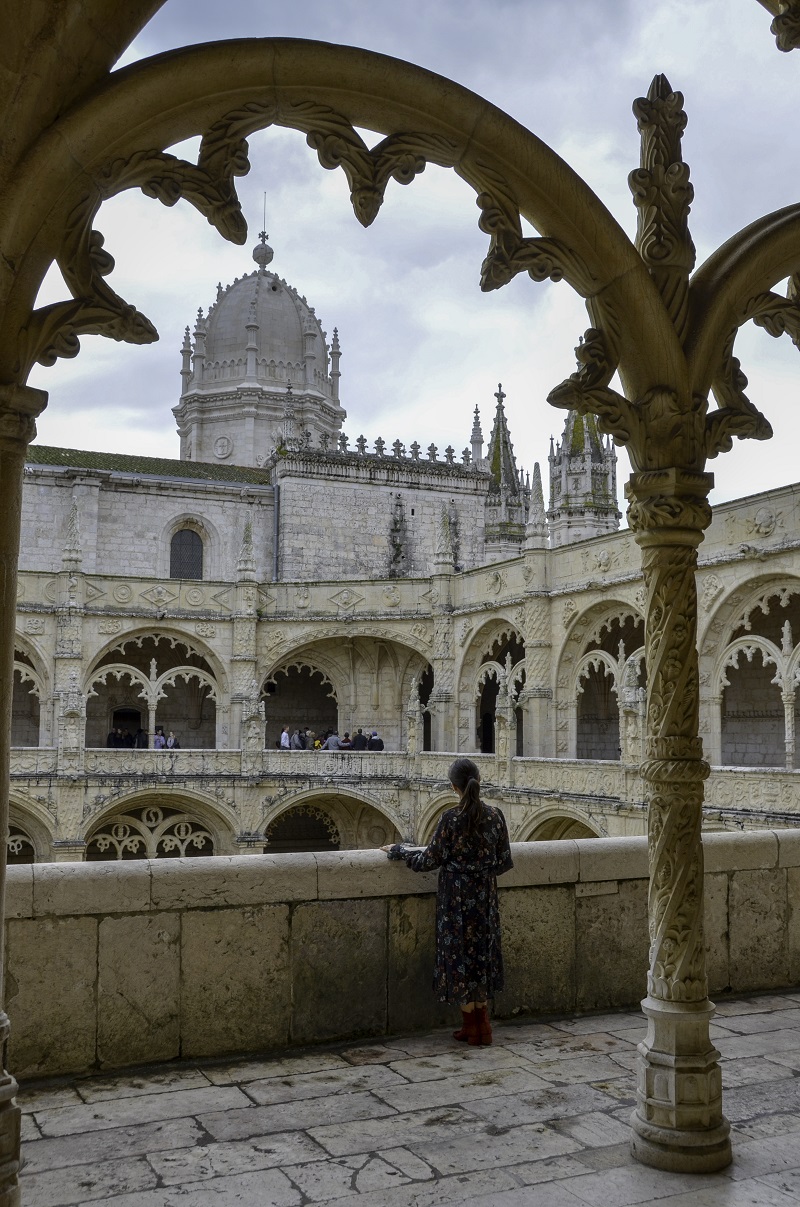 In the wise words of our local guide Bruno Jorge, the best way to experience Alfama — one of the only neighbourhoods in Lisbon to withstand the earthquake, fire and tsunami of 1755 — is to get lost strolling through its picturesque streets.

After taking random lefts and rights, meandering through narrow alleyways, up steep stairways and along cobblestone streets, we came to a pause, as we heard someone call out to us from a second-floor window. Through some interpretation, we learned the voice belonged to an 84-year-old named Angela, who has lived in the building since she got married many moons ago, and today, she couldn’t imagine living anywhere else. The exchange lasted mere minutes, but it perfectly captured the essence of discovery. You can’t script these moments.

Dubbed the capital of cool, Lisbon has come into its own as a trending European city destination. From panoramic views across seven hilltops to its distinct neighbourhoods with tile-covered houses to stunning castles and diverse architecture, Portugal’s capital city is packed with postcard-worthy scenes. Even its yellow trams command attention.

While there are no shortage of things to discover in the city, we thought it would be helpful to put together a list of must-dos for any visit to Lisbon…

Indulge in local delights: Portugal is home to the tasty Pastel de Nata custard tart readily available throughout the city. Pastéis de Belém has been making the treat since 1837, following an ancient recipe from the Mosteiro dos Jerónimos. Tie this in with a visit to the Belém Tower or the monastery, but be prepared for some lines as after all this time, the secret is out. By the numbers, Pastéis de Belém sells roughly 25,000 tarts per day!
Visit the Time Out Market Lisboa to get a taste of some of the most popular local restaurants and cafés under one gigantic roof. With dishes ranging from pizza or pasta to fish and steak, this is also a good option if everyone in your party is craving something different.

For some local beverages, try Ginjinha, a Portuguese liqueur made by infusing ginja berries, which has a sour cherry taste, or give vinho verde a whirl, which like the name suggests, means green wine, and is a bubbly wine perfect for a summer’s day.

Take in views from the top: Watch the sunrise or sunset from Miradouro da Senhora do Monte (Our Lady of the Hill), which is the city’s highest lookout point and features panoramic views of Lisbon including São Jorge Castle, the bridge of 25th of April (comparable to the Golden Gate Bridge), and the Tagus River. This is just one of many viewpoints throughout the city, which locals refer to as “miradouros.” 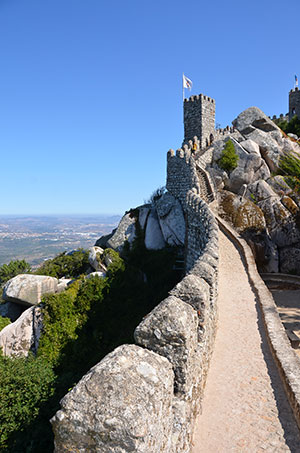 Day trip to Sintra: With unique historic buildings set on the hills of the Serra de Sintra, this picturesque UNESCO World Heritage Site is a short drive or train ride away from the city. The Portuguese town features many attractions like the colourful Pena Palace, the National Palace of Sintra and the remains of the Castle of the Moors, a fortification established during the 9th century.

Get in the hood: To get a good sense of Lisbon, experience a variety of its neighbourhoods. As previously mentioned, Alfama is one of the oldest districts to explore. Behind every corner there are cafés, viewpoints and endless photo opportunities. For those looking to experience Lisbon’s thriving nightlife, head to Barrio Alto, which has more than 250 bars, pubs and nightclubs. One thing a lot of districts have in common are places to shop. A neat gift idea (or souvenir, why not treat yourself) are some colourful tiles, which can be used for décor or as coasters, and reflect elements of the city in their designs.

Discover Lisbon: Built from limestone over a period of 100 years, the monastery of Los Jerónimos (featured on the cover) is another must when visiting Lisbon. The prominent example of Portuguese Late Gothic Manueline style of architecture, along with the nearby Tower of Belém, are classified as UNESCO World Heritage Sites. Another popular attraction to take in is the Christ the King statue, Lisbon’s version of Rio’s Christ the Redeemer.
To get a feel for Lisbon’s modern side, head to LX Factory, which features a variety of clothing, food and decor shops, tattoo parlours, restaurants, and artisan-made products. Grab a bite to eat or prepare for a night out with some cocktails at Rio Maravilha. On Sundays, there’s a market for those who love to shop. 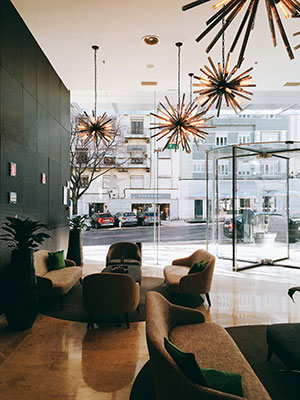 The entrance of Iberostar Lisboa

Quite opposite to Joni Mitchell’s famed lyrics, Iberostar Hotels & Resorts paved a parking lot to put up a little slice of paradise. Opened in October 2017, Iberostar Lisboa has 166 contemporary rooms and suites, featuring neutral tones. The 5-star hotel designed by the Capinha Lopes studio is located in the central area of Baixa, one of Lisbon’s business and shopping hubs, and is a short drive from the airport. The city hotel marks the company’s first foray into Portugal.
For Gloria Fluxá, vice-chairman of the Iberostar Group, one of her favourite parts of the hotel is the location, noting Lisbon is becoming increasingly hip and trendy.
“The location is exceptional, it is truly exceptional,” adds Luis Mota, the company’s group chief strategy and finance officer. “It’s a brand new asset, which is something that’s pretty pretty tough to find in Lisbon. We think it’s a great example of what we want a city Iberostar hotel to be.” 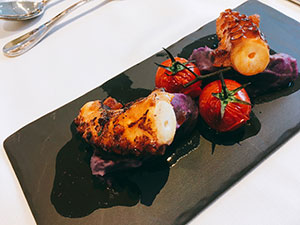 COOL FEATURE: rooms come equipped with cell phones, which guests can use during their stay to surf the Web, find directions and even make long-distance calls.
BE SURE TO: have a meal at the on-site Luz restaurant.
Instagrammable moment: the outdoor pool, which is surrounded by a picturesque vertical garden.
UNWIND: at the hotel’s wellness centre and spa.
DRINK UP: poolside at the outdoor bar or at the stylish Boalma Lobby Bar.
https://www.iberostar.com/en/hotels/lisboa/iberostar-lisboa 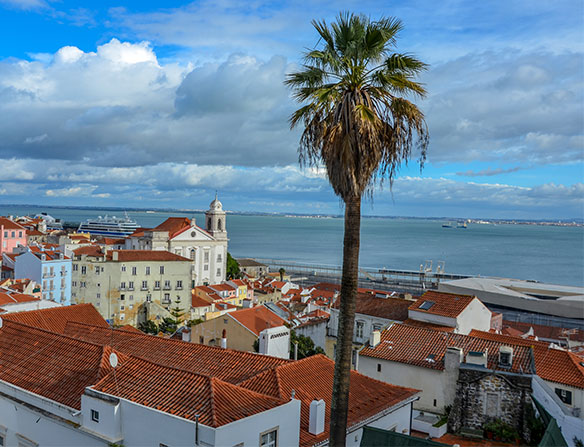