Lofty Jackson Hole has slopes for all levels of skiers 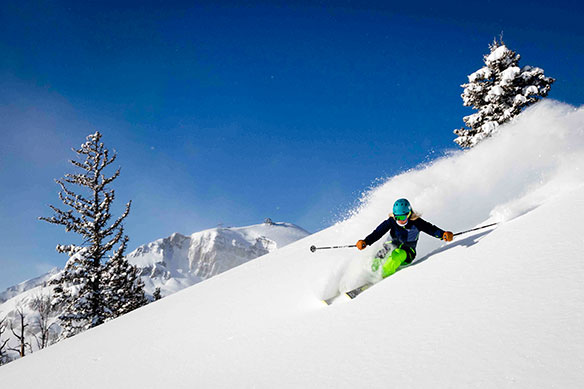 (Photo above: Jackson Hole has a vertical drop of over 4,000 feet.)

Chantal Cabrera believes that going downhill can be truly uplifting.

And she adds that she knows a great spot for those wanting to head in that direction.

Cabrera, sales and marketing manager for Wyoming’s Jackson Hole ski resort, says a trio of “bests” is certain to give skiers a great experience
at that site.

“I think we have the best terrain in North America,” she says, adding Jackson Hole has a vertical drop of over 4,000, greater than probably better-known Vail.

Cabrera also believes her resort has the best snow – last ski season saw it receive a “memorable” 505 inches – and also says the area’s cowboy culture gives it another interesting dimension.
The resort has 2,500 acres of beginner, intermediate and expert terrain, with Cabrera stating that it is best known for “the steep and deep, but we also have a softer side. There’s something for everyone.”

Jackson Hole’s impressive vertical drop is understandable, given its region. The resort is an hour from Yellowstone National Park and five minutes from Grand Teton National Park, underscoring the mountainous part of the world it’s in.

Cabrera says those exploring the area by car will spot the likes of moose, elk and bison, and bears can be seen in the summer.

Skiers can stay in one of the six hotels or one of the hundreds of rental condos found at the base of the mountain or in the town of Jackson, 12 miles from the ski slopes. Jackson’s western ambiance is quickly visible, with the community having wooden sidewalks, police patrols on horseback, distinctive western architecture and the likes of the Million Dollar Country Bar, which uses saddles as bar stools.

The resort – which has a season that generally begins on American Thanksgiving and plans to run through April 12 this winter – has seen new developments, including the arrival of the Eagle’s Rest quad chairlift, which gives schussers greater access to beginner terrain.

Cabrera adds that Jackson Hole has a “beautiful new building called Solitude Station” that can be reached by gondola, and has the likes of a café and ski lessons.

She adds that those staying at the base of the mountain will find bars and restaurants, enabling them to easily spend their entire vacation there, rather than going into Jackson at night.
Cabrera says her resort tends to be less expensive than other major US ski resorts.

Meanwhile, Cabrera says Jackson Hole tends to be a lively place, citing the likes of the annual Jackson Rendezvous Festival. The next will be held March 27-29 and feature current and classic musical along with parties.

February sees Kings and Queens of Corbet’s, which has male and female skiers undertake the likes of backflips on a run labelled the “biggest, baddest, boldest” in North America. Male and female winners are chosen by judges.

Jackson Hole has a Canadian Dollars at Par Package.

More information can be found at JacksonHole.com.