Lofty seating a high-light of tours on Thai island 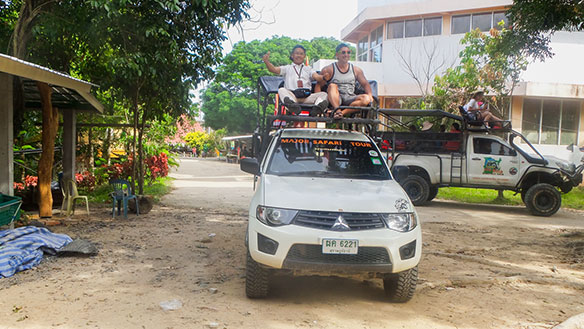 Pictured above: Guide Chaiwut Phakaew and Chad Intrachooto are ready to roll on Koh Samui.

Talk about taking the high road…
Tour companies on the Thai island of Koh Samui offer backroads tours that enable passengers to ride on cushioned benches in the backs of pickup trucks or, if they’re more daring, sit on makeshift seating that’s literally atop the roof.
The rooftop rides are popular with tourists on the tropical island, although local tour guide Chaiwut Phakaew conceded, “it’s bumpy – not comfortable.”
Rooftop riders don’t have seatbelts, which may lead to some white knuckles for those riding to and from the Teepangkorn mountaintop Buddhist temple complex, found some 650 metres above sea level. The site can be reached by a choice of roads, one of which is rough and at times steep.
“It’s like we’re in turbulence all the time,” passenger Chad Intrachooto said while travelling the bouncy, narrow, unpaved road in a Major Safari Tour Mitsubishi truck.
The lofty perches are only used in back country, as occasional low-lying cables would make that travel hazardous in towns.
Phakaew said he’s ridden in the upper seat-ing and didn’t feel nervous, adding tourists are “happy sitting there.”
Phakaew insisted the upper seating is safe, although tour companies do warn intrepid passengers “to hang on.”
He added that Thais who go on the tours generally prefer sitting in the canopied backs of the trucks, well aware that those who go the upper route will be getting plenty of exposure to a powerful tropical sun.
“Thais don’t like to get tanned,” he reports.