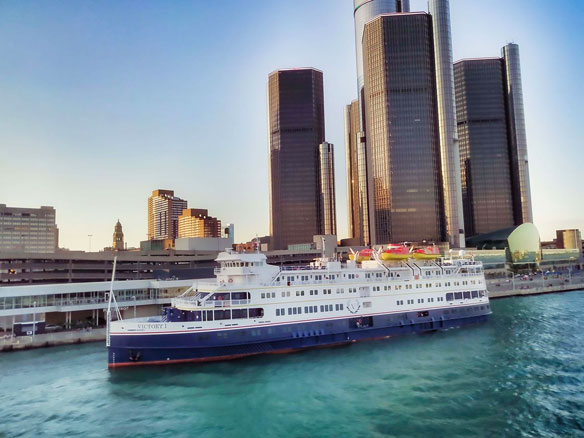 The Great Lakes’ cruise potential is seen as great.

Tourism officials from both sides of the Canada-US Border gathered in Toronto May 31 to praise the massive water bodies for the opportunities they offer those who enjoy vacationing by boat.

The event was organized by Cruise the Great Lakes, an international partnership aimed at attracting more cruise passengers to the lakes.

“The Cruise the Great Lakes initiative is a landmark development for tourism along the Great Lakes and for Ontario,” said Ontario tourism minister Michael Tibollo. “Together with our American colleagues and our industry partners, we’re showcasing the Great Lakes as a world-class cruise destination and supporting economies in port communities across the province.”

Dave Lorenz, chairman, Cruise the Great Lakes, then told the gathering that the region is building a following that he wants to see grow substantially.

“In 2018 alone, our waterways saw nearly 100,000 port visits by passengers. Cruise the Great Lakes aims to increase those numbers, which, in turn, increases the amount of economic impact.

“Our immediate focus is on marketing to potential customers in North America,” Lorenz continued. “We’ve seen that regional cruising has been growing rapidly, despite the lack of a consistent regional brand or marketing program specifically directed at cruise passengers, so we believe our strategy for Cruise the Great Lakes will unify the core messaging and position the region for sustained cruising growth for years to come.”

I believe there is no better way to experience the unique culture, beauty and diversity of these areas than by cruise.”

Toronto has become a focal point of Great Lakes cruising, with Geoffrey Wilson, CEO of Ports Toronto telling the gathering that this is likely to be a record year for cruising in Toronto with 35 ships expected to visit the city this summer.

“Cruise the Great Lakes will not only bring more people to visit these magnificent waters, but will directly contribute to Toronto’s booming tourism industry and showcase all that the city has to offer.”

For more information can be found at cruisethegreatlakes.com.

Cruise coalition has high hopes for the Great Lakes

The executive director of the Great Lakes Cruising Coalition is confident that the number of people opting to sail the Great Lakes for their vacations will see dramatic increases.

Stephen Burnett says “doubling the current inventory is not out of the question” over the next five years.

Burnett, who’s served at the GLCC for the past 20 years, says he’s asking those who enjoy waterborne vacations to think of the Great Lakes.

“All we ask is they consider Great Lakes cruising as a fascinating opportunity and get to know some of the amazing ports they have only heard about,” he says.

“The Great Lakes is the last un-cruised region of the world, and given the way cruising has become a significant pillar of the travel industry, the emergence of quality cruising on the Great Lakes has an exceptional future.”

The number of people choosing the Great Lakes for a cruise is dwarfed by the number opting for sailings in the Caribbean and Mediterranean.

But Burnett says the water bodies he promotes have plenty of attributes for tourists.

“I don’t think this is an ‘either-or’ decision,” he says of the world’s varied cruise opportunities. “The Great Lakes have a uniqueness all of its own that is different to overseas cruising. Five Great Lakes with five distinct personalities. Two federated nations (Canada and the US) plus several First Nations, several US states and two Canadian provinces.”