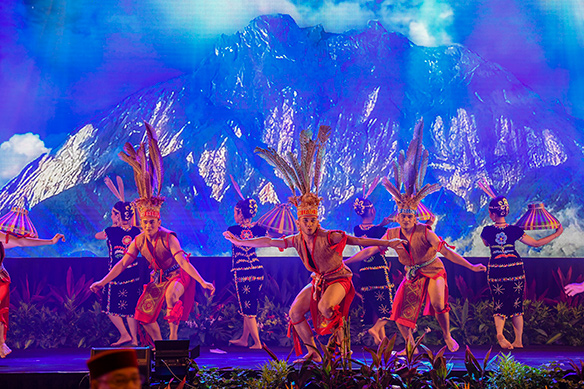 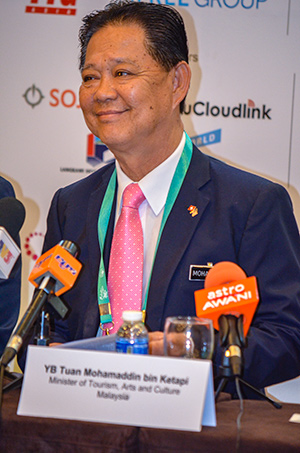 Malaysia doesn’t usually come first to mind in discussions of South East Asian beach destinations – North Americans are probably more likely to consider well known hot spots like Bali, Ko Samui, Phuket and Boracay.
But Langkawi, just off the west coast of peninsular Malaysia, is doing its best to change those perceptions. The island has gathered momentum in the recent past, with the opening of new hotels, resorts and attractions, but still has a long way to go reach the level of mass tourism that now characterizes those other islands.
Yet because of this, Langkawi was the perfect venue for the recent PATA Travel Mart, which took place at the Mahsuri Exhibition Centre in mid-September.
Langkawi nicely fits the description of a “secondary” destination, which has the space and (developing) services to handle the growing wave of tourism that crowds into so-called primary destinations (eg. Kuala Lumpur, Penang and Malacca in Malaysia).
A primary goal of PATA is to promote travel to places that are not major cities or destinations, during less busy tourism seasons. Langkawi fit that agenda – one which was especially challenged by the scope of the PATA Travel Mart.
“It is by far our largest event of the year,” said Dr. Mario Hardy, the CEO of PATA, who was in attendance over the course of the three-day event.
There were 389 sellers from 208 organizations attending the Travel Mart from 33 destinations, most in Asia. Some 252 buyers from 53 source markets from around the world came to meet those suppliers at scheduled short meetings. A total of 1,400 delegates, including dignitaries, organizers and media, descended on Langkawi, booking out hotels, dining venues and attractions during this normally slow (and wet) off-season. 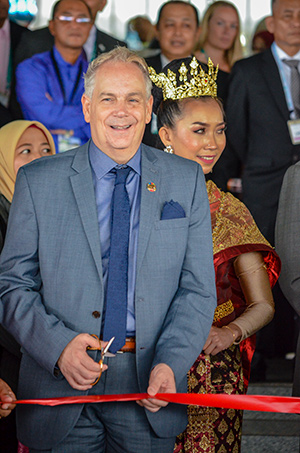 Meeting the challenges
Given this significant undertaking by PATA, the timing was right for the release of a new study on overtourism and how to manage it, by the UNWTO. It was coincidentally launched during the 7th UNWTO Global Summit on Urban Tourism in Seoul, Sept. 16 to 19, and focuses on growing urban tourism flows and their impact on cities and residents.
The report examines how to manage tourism in urban destinations to the benefit of visitors and residents alike. And it proposes ways to ensure sustainable policies and practices that minimize the adverse effects of tourism on natural resources, infrastructure, mobility and congestion.
“We are working towards establishing ‘managed tourism,’” said Hardy, during a break at the Travel Mart. “I don’t like the term overtourism.”
PATA also took advantage of the occasion to release its own study, which instead concentrates on the use of digital tools to more effectively manage tourism and employment in the tourism industry.
Over nine million new jobs can be created within Asia Pacific destinations over the next five years by fully embracing digital platforms and data driven innovation in the tourism sector. This is according to the new study, entitled “Data & Digital Platforms: Driving Tourism Growth in Asia Pacific.” It was published by PATA and Tourism Economics, an Oxford Economics company, with the support of Google.
“Now more than ever, it is critical that organizations obtain a thorough understanding of current technologies and innovations to make smarter and more informed decisions,” said Hardy. “This comprehensive report on digital platforms and data-driven innovation provides important insights to the need for embracing the disruptive and technological changes occurring within the travel and tourism industry.”

Canadians connect in Langkawi
The recent PATA Travel Mart in Malaysia was by and large a success with some exceptions, said Canadian buyers contacted by Canadian Travel Press.
“I met up with some of our existing suppliers and was able to make a couple of good connections for future business,” said Tordes Schaefer-Charlton, the inside sales manager at Indus Travel in Richmond, BC. It was her first time attending a PATA event and she noted that the supplier appointment system seemed flawed.
“They asked me to request 40 appointments and then ended up not giving me most of the ones I requested. I ended up with some that were definitely not companies I would have made an appointment with. I feel those were a waste of time for both myself and of course the supplier.”
On the other hand, Tordes was pleased with Langkawi as a destination.
“It’s a great choice for travellers who want to end a stay in Malaysia with time at the beach.”
And she really liked her accommodations. “I stayed at the Berjaya and it was fabulous. It’s a great property for families and couples.”
Mario Skrpec, the general manager of Mariden International in Edmonton, was less pleased with his accommodations on Langkawi, and he noted that his four-star rated hotel did not meet expectations. He based his assessment on comparisons to four-star properties in Europe and said that a lack of long term maintenance continues to be an issue. “They need to do their homework,” he said.
But after attending the PATA Travel Mart for 22 years, Skrpec acknowledges the importance of this Asia Pacific trade show on his business calendar. “Europe is our bread and butter, but Asia is up and coming, and becoming more important for us.”
He only wishes that the conference schedule dates could be adjusted a bit, to account for the operation of another key travel trade event – the Travel Mart Latin America – that he also needs to attend on an annual basis.
The turnaround time between the two events is a short one or two days, and the travel distances that must be covered are enormous – the Travel Mart Latin America was held in Buenos Aires this year. “The organizers should get together to change this scheduling.” 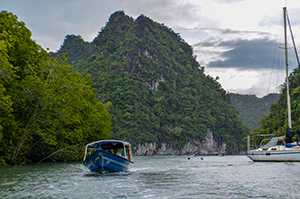 (Phot by Ted Davis): Scenery throughout the Kilim Geoforest Park on Langkawi consists of karst rock formations and is very striking.

An ideal location
Regardless of distance and air accessibility from Canada, Langkawi nonetheless holds an ideal geographic location in South East Asia, said Skrpec.
With a location just off the west coast of mainland Malaysia, it is situated on route between Singapore and Thailand destinations like Phuket and Krabi (Thailand is visible from Langkawi). He envisions the potential of creating tours that take advantage of this geography, if some supplier issues can be resolved.
“The people that I met in Langkawi were very nice and very helpful,” said Skrpec, who noted that the tropical Malaysian island is on the right road to upgrading its standards with attractions like the Langkawi Sky Cab and Sky Bridge. Others attractions of note include Kilim Karst Geoforest Park – which can be experienced on boat tours – and the excellent Langkawi Craft Complex.
This year’s PATA Travel Mart was also beneficial to Belinda MacNeil, the Asia product manager for Goway Travel. She was attending for the first time, although Goway has had a buyer presence at the show in the past.
She noted that she met with some beneficial suppliers that the company could partner up with for future endeavors, and that those could even strengthen some programs that are already in place. As for discovering new products, she said, “yes for sure, particularly on the hotelier side of things, it was great to see some exciting accommodations.”