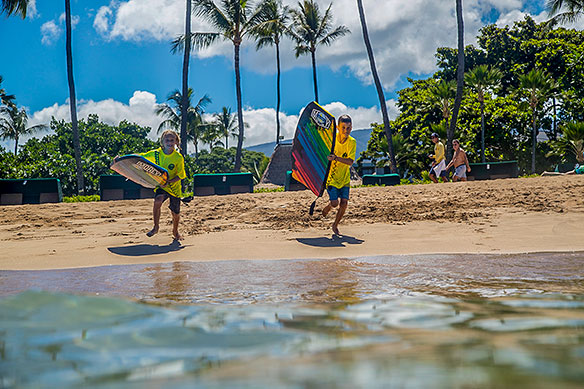 (Photo above: Water sports are hugely popular with visitors to Hawaii, with Maui’s Ka’anapali Beach Hotel
among those offering many activities to those wanting to spend time in the ocean.)

Maile Brown says those visiting the Hawaiian island of Hawaii may end up feeling a little star-struck.
Brown, speaking on behalf of both the islands of Hawaii and Kauai during a recent Hawaii promotion in Toronto, told the audience Hawaii’s 4,205-metre-high Mauna Kea Mountain enables people to “actually see 90% of all visible stars.”
And, said Brown, those celestial displays are only one side to an island – which is frequently referred to as the Big Island, but which tourism officials like to call Hawaii – offers nature enthusiasts.
Brown noted that those visiting the west side of the island can go on nighttime boat tours on which crew members shine lights into the water to attract plankton, which in turn draws manta rays – “some with a 10-foot wingspan” – that feed on the plankton.
She added that Hawaii Volcanoes National Park lava flows work their way into the ocean. “Where else can you go to watch new land be created?” she asked.
Helicopter tours of the area are available. Doors on the whirlybirds can be closed or open, with Brown joking that a “doors-off [tour] is free, but it’s $300 for a seatbelt.”
Lava boat tours are also available.
Another option for energetic sorts is kayaking along irrigation canals that work their way through old sugarcane plantations.
Brown, director of marketing for the Kauai Visitors Bureau, said Kaui is a lush island with crescent-shaped beaches and is a “really wonderful place for you beach bums out there.”
People visit Kauai to “escape the craziness” of the rest of the world, Brown said.
The island is known for its natural beauty, with highlights including Waimea Canyon, which Brown labelled a “baby Grand Canyon.”
Some 80% of Kauai is inaccessible by car, Brown stated.
Meanwhile, Julie Yoneyama of the Maui Visitors Bureau noted Maui is home to Lahaina, which served as the capital of the Hawaiian Kingdom.
“There’s always something new to explore [on Maui],” added John White of the Ka’anapali Beach Hotel, which bills itself as “Hawaii’s most Hawaiian hotel.”
Yoneyama added that unusual experiences on the island of Molokai include visiting a community that began life as an isolated locale for people under medical quarantine because they had contracted leprosy. A priest and a woman who helped turn it into a functioning community with churches and other features associated with normal small-town life eventually were canonized by Pope Benedict and the date the priest – Father Damien – died (April 15) is now a holiday in Hawaii.
Yoneyama said those who visit the site will be in a “very spiritual area… You feel their joy. You feel their sorrow. You feel their accomplishments.”